What you should know about Iran. 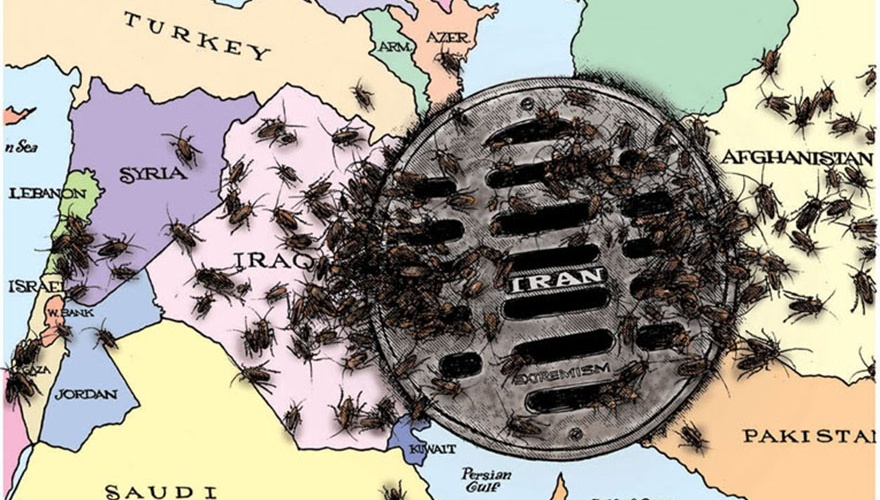 The following is a loose collection of the terrible things that Iran has done over the years.

Aside from Iran’s stated goals that they want the destruction of Israel and want to unify the Muslim world (and eventually the whole world by advocating killing all infidels) under their Islamic Republic’s rule, they’ve been demonstrating that they are working toward this goal at every turn. This is going to be hefty but let me try to recount the ways;

Hezbollah is but just one proxy Iran uses to wreak havoc across the globe. They have MANY shadowy agencies that are fighting America in the shadows and out of the headlines. Iran was the main sugar daddy of Yassar Arafat and his terrorist organization Hamas which for decades carried the flag against Israel and else anyone who‘s not Muslim.

We’ve seen in recent months that Hamas isn’t interested in peace for Palestine. After America forced Israel to recognize the sovereignty of Palestine they held their first real election. Hamas couldn’t abide the will of the people so they have been attempting a protracted coup d’ etat. They’ve been patrolling the streets like the thugs they are and attacking Fatah strongholds. Anything to destabilize the fledgling republic. I realize that if you force a democracy on a country that is in no way ready for it, you'll end up with disaster; they'll vote for 'hope' once but after that they'll go back to being the stooges for their local bully.

Most people don’t realize that it is now pretty widely accepted among those in the intelligence community that it was indeed Iran working through the Iranian Revolutionary Guards Protection and Intelligence department working with Hezbollah agents in Lebanon that would load explosives on TWA flight 800 taking off from JFK airport in NY. On July 17th 1996 Twenty minutes after it took off, the plane exploded killing all 230 persons on board. 2 days later, our good friend, the little albino shrew, Richard Clarke convened a meeting of the interagency Coordinating Security Group telling all of his counterparts at State, NSA and the Pentagon to quote BACK OFF their investigations of the attack being linked to terrorism until the NTSB had thoroughly investigated the bullshit story they were going to sell it as until the election.

Another covert wing of militant Islamist movement controlled by Iran is The Qods Force. The Qods force is the quasi-independent branch of Iran’s Revolutionary Guard established by Iran’s former president Rafsanjani to carry out foreign terrorist attacks. On June 25, 1996, 4 men in 2 cars and a truck loaded with explosives executed a plan funded and developed by The Qods force. These men drove into the Kobar Towers housing complex in Dhahran and then used a timer to detonate the explosives after they had safely escaped in the two get-away cars. The blast killed 19 American Serviceman in their homes at 10 in the evening.

Rumors of Iranian responsibility surfaced with days of the attack but Clinton said he would respond appropriately once the investigation had reached a final conclusion. FBI Director Louis Freeh would be dubbed to head the investigation. The Saudis had rounded up 6 Saudi Hezbollah suspects and held them in their prison. They cracked right away and in video taped testimony described how the Iranian Special Force, The Qods Force had planned, funded and executed the attack. The RDX/hexalite explosives they used were traced back to an Iranian military factory.

In May of 2003 Freeh admitted to the Wall street journal that he had to go to GHW Bush to use his influence with the Saudis to allow him to personally interrogate the 6 Hezbollah detainees. He said he went to Bush because Clinton was trying to keep the truth from coming out just months before his reelection in 96. Freeh’s disgust with the Clinton administration is well documented but not widely known and the mainstream media has buried it. But hell, even most of the guys on my side are ignoring the looming nuclear showdown with Iran.

As the 911 commission would later discover, multiple intel reports detailed the operational ties between Saudi Hezbollah and Al Qaeda but nobody thought to tell Louis Freeh so that he could do connect the dots to foil the plans executed on the fateful day that changed the world forever.

Beruit in 1983 over 300 were killed including 231 American Serviceman.

In ‘85, TWA flight 847 was hijacked by Iranians. On the tarmac in Algiers, a hostage was held at gunpoint at the plane’s forward door until all the cameras were rolling. The hostage was shot in the head and pushed to the tarmac where he lay for hours before the plane took off for Beruit.

Countless bombs exploding on busses in Israel are the direct result of Iranian government masterminds and their funds. We know the Iranian mullahs execute dissidents dozen at a time.

And in addition to all the evidence that they will use whatever military means at their disposal, we know they are rushing, full steam ahead toward developing their own nuclear weapons systems while trying also to buy them on the black market.

In October 2003 Iran delivered a report to Mohhamed Al Baradei at the IAEA- International Atomic Energy Agency admitting they had been working on enriching uranium and extracting plutonium in secret since ‘81. Al Baradei and his team have toured the Natanz nuclear facility and although they weren’t allowed to freely tour the entire facility, they detected nuclear material that was enriched in a way for weapons use, not for standard energy use. The IAEA hasn’t released its report of its findings but when it does, it will be interesting to see if al Baradei will be honest and admit he’s been duped.

In intelligence reports gleaned from the capture and cooperation with AQ Kahn - Pakistan’s nuclear father, we know that Kahn was selling Iran advanced nuclear technologies that could only be used for weaponry. They bought a small airport in Germany to help the shipping of the necessary parts.

We know some nuclear missiles from the former Soviet Union were being bought by Iran from slimy remnants of the communist regime who could name their own price when they’re dealing with oil rich nations bent on keeping secrets. We know they were buying from the Soviets because they were caught red handed a couple of times. And now Putin and Ahmadinejad are becoming good buddies with Hugo Chavez in our back yard just as they did with Castro.

2005 In Lebanon, assassins tied to Hezbollah killed Pierre Gemayel, a prominent participant in the Cedar Revolution.

In Late 2006 Hezbollah fighters began lobbing mortars and missiles into Israel from Lebanon drawing Israel across the border and further destabilizing the new freely elected government.

In stark opposition to the stupid conventional thinking that Sunni and Shia won’t team up to take on America We know that Iran did aid al Qaeda with 911 and are fighting us in Iraq. Even some Democrats have recently been swallowing their words and publicly making statements that confirm al Qaeda and Iran are collaborating.

Iranians themselves have been keeping us informed about how bin Laden’s eldest son Saad is doing with his house arrest in a posh suburban home north of Tehran.

Poppa Bin Laden had a bodyguard named Ali Mohamed when he was in the Sudan. For years Ali provided extensive details about bin Laden’s ties to Iran when he struck a plea bargain in the Kenyan bombings case.

We know bin Laden’s chief advisor Ayman Al Zawahri has been meeting with key leaders in Iran since before 9/11 and as late as 2005.

Now in Iraq we have the Iranian backed Sunni Al Qaedas blowing up Shia mosques to get the Shias all worked up and fighting mad and we have the Shia led Iranian force Ansar al Islam and other small obscure Shia militias targeting Sunnis in the Country.

Spring of 2007; Iranian-backed uniformed soldiers who were members of the “Children of God” militia attack coalition forces on the road to Karbala during their holy week celebrations.

So much of the evil that comes out of Tehran is masked so as to conceal the real identity of those responsible.

The list goes on, but I think the picture is pretty clear.