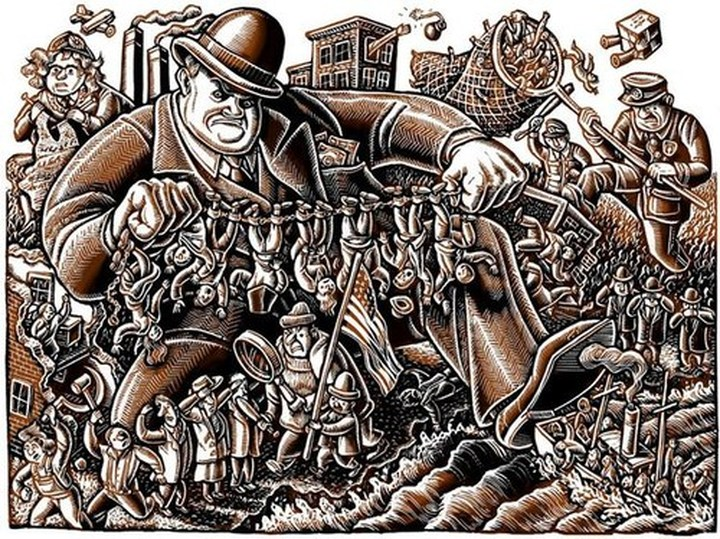 A "socialized controlled" economic economy, which is enmity to a Free Market economy, is where the value of the compensation to labor; and the value of the goods and services are not controlled by "supply and demand", but rather by the State (or Government).

What better way to the state and government, to control the economy with "Socialism", but with Unions.
Let me say this; I'm not against Unions. I can also say; I don't belong to one, never have, and don't plan on it either. I would rather be a free person, than be controlled by a Union Boss, dictating to me what I can and cannot do, and what I have to do to support the Union. Plus, to me, Unions create one thing: Labor "Kingpins".

Alexander Mitchell Palmer, President Woodrow Wilson's third Attorney General during his two Presidential terms in office, is known for his "Palmer Raids" that he conducted during a three-month time frame, deporting more than 500 foreign citizens.

But before the Palmer Raids, Palmer was probably the "Greatest" of the "early" champions of helping to bring about the current wage and hour standards that we have today, as a Congressman, and later as Wilson's Attorney General.

As the "progressive wing" of the Democratic party (that he was a member of) and championing Labor Unions progressed towards a more "leftist-wing" than Palmer desired, it resulted in him, himself, becoming a target of a "Left-wing" terrorist attack.

Thus, the arrest of 10,000, 3,500 held in detention, and over 500 deported of those Union members he once supported in Congress, and as an Attorney General.