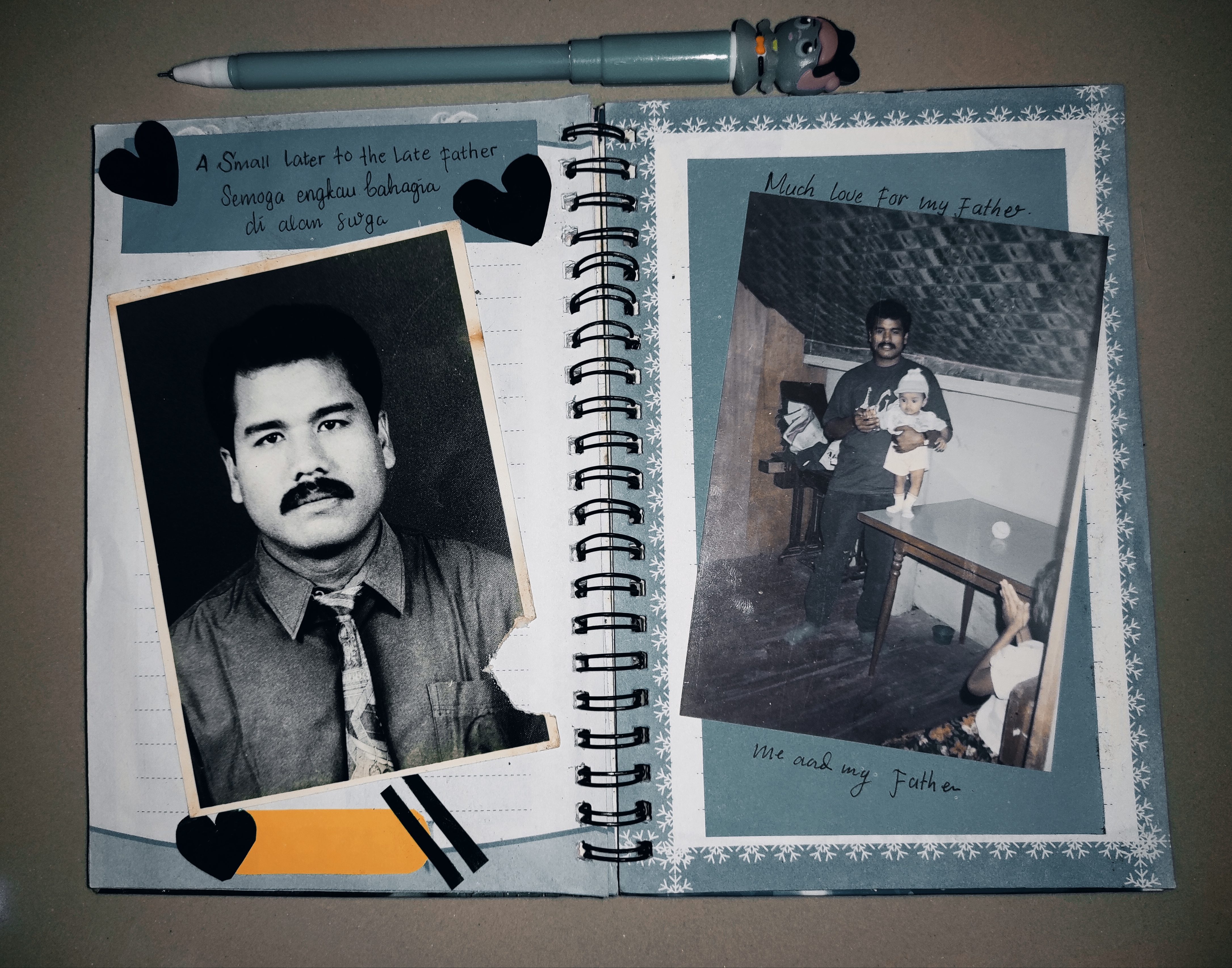 A photo of my father holding me as a child

My father is the second of three siblings. From the first he was a child who spent his youth overseas. Entering the age of 17 years, my father left the village where he was born and where he spent his childhood. He migrated to the city center. In the provincial capital, he works as a garbage collector or garbage cleaner in the city center. After that, he worked at a food stall as a cook. And in 1990, he married my mother. Not only before marriage, but after marriage he also went wandering again to the provincial capital.

My father is a hard worker. His tall and muscular body reflects that he is a person who feels the hardship of the struggle to make a living for his family. He is also a very affectionate person and has a high social character. Besides, his gentle heart treats my mother as his wife. During his marriage to my mother, he never once said dirty or abused, beat or even scolded my mother. He also has a very patient nature.

My late father was a person who liked to joke. For decades he has been a cook. After the Tsunami incident in 2004 ago. My father started his career as a street vendor businessman selling packaged rice. Assisted by my mother, they both earn a living to pay for the necessities of life for the three of us. My dad really likes cooking. Yes, my father has the expertise to make very delicious dishes.

Photo of my father attending his nephew's wedding

Everything looks very clear at the sacrifice he made for his family. A father who works hard, day and night, rainy or sunshine, he works non-stop. Sometimes fatigue is very visible on his face. However, even though he never complained. We live from day to day. Migrating to the capital to earn a living, a bite of rice. My father hitched a ride to sell rice from a cart. Even though he never said a complaint. My mother is always loyal to accompany her every struggle in earning a family income.

4 The last year before he passed away, he worked very hard to pay for my brother and my education. I am currently pioneering education at a private Institute in Aceh. The two of us, my first brother and I were studying at a boarding school. And we both spent a lot of money, so my dad worked really hard at that time. Early February 2016, my father had a motorbike accident while on his way to the dormitory where I lived. On the way he had a stroke and the motorbike he was driving with my mother rolled on the asphalt. One week he was hospitalized and the last he was in surgery because of a blood clot in the brain.

The last expression of my love for the father

That day my cousin's brother came to the dormitory where I live. He brought bad news about my father that he had had an accident on the way to visit and visit me at the dormitory. And I immediately asked permission to take a day off and go home. When I got home, the family was already gathered to sit around my father. I saw him lying there with my eyes closed. I called him and he woke up. I hugged her tightly and the tears were unstoppable and my loud cries broke out in her arms. At that moment I asked him why father got like this. He replied, he wanted to see me in the dorm because he missed me. Hearing her say that, I cried even more. I told him that I really love dad and He said so too. And that is the last expression of love and affection of a father and son. One week after that my father was back in the hospital and had to undergo surgery because of a blood clot in the brain. While in the process of draining blood on his head, he never woke up again. He failed to heal. And he's gone for ever.

A Longing For Dad
In the corner of the room I opened an album of old and shabby memories.
A photo album of his late father's memories.
Sheet by sheet I keep opening.
Don't feel the tears dripping. .
Miss that is not hidden anymore.
How to vent a longing with someone who has died. .
People celebrate the day of love together with their loved ones.
However I commemorate the day my father left the world.

I would like to say a big thank you to @steemcurator01 and @steemcurator02, as well as to all steemian Friends wherever you are. Once again I thank you very much for your support to me.

hi @lidiasteem I have confirmed your contest entry. Like all women, you expressed your love with your best words. The biggest chance in this life is to have a good family. It always makes you happy. It's emotional to confess your love to your father. Not everyone can say such good things about their father. I congratulate you for your nice words. .
Thank you very much for participating in the contest. Our slogan in this community; together we are strong. We will support each other. I will strive for women to win. . Keep making quality posts in the community.
If there is any problem, you can reach it from discord channel. Good luck :)

I would like to thank @steemwomensclub for holding the contest. I am happy to be able to share the story about my Father. By writing, and sharing stories about it here, at least a little of my longing can be relieved.

Hello princess, how beautiful everything you say about your father, I also love my father with my life. I was delighted to see you here, thank you very much for participating and being loyal to the community. Greetings xoxoxox