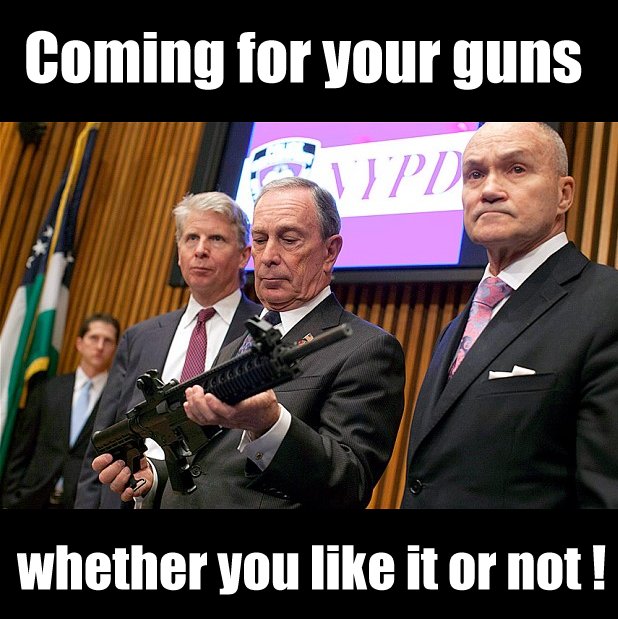 I just had to weigh in on recent news whereby former New York City mayor and recent Democratic presidential contender Michael Bloomberg has virtue-signaled his harsh stance on gun control.

You can read up on it at:

A few quotes and extracts:

“I’m just getting started,” Bloomberg declared, adding that “As president, I will work to end the gun violence epidemic once and for all.”

“This is part of my life‘s work, and I‘m just telling you I will get this done whether I get elected or not.“

I mean on what authority does he assert that he will "get this done" whether he is elected or not? Who gives him the right to decide on this?

Would Bloomberg himself prefer his bodyguards be armed with slingshots rather than guns?

I don't think so.

What a lying hypocrite.

We could go on and on with such rhetorical questions. But at the end of the day, we all know what this is really about.

It is not about ending gun-related violence. More people die in the United States each year for countless other reasons. This is really about Bloomberg showing his true colors as subservient and a butt-licking billionaire GLOBALIST PUPPET, a la George Soros, Jeff Bezos, Mark Zuckerberg, Larry Paige, et al.

The so-called "Gun Control" issue and debate in America is really about control over the greater population.

The Powers-that-shouldn't-be know that upon the forthcoming chaos that will ensue after the inevitable collapse of the current everything bubble and ponzi monetary system, the greater population will [finally] be really pissed off and look for someone to blame. That "someone" is mostly comprised of the banking elites and their billionnaire buddies, such as Bloomberg himself. With over 400 million firearms - more than 1.2 per US citizen - already in existence, it would surmise that going after their guns is a fool's errand.

I know that there are going to be some people, most likely on the Left, who will advocate for Gun Control. To those progressive minds, I will leave you with a great piece of writing about a real life story for you to reflect on:

Today, I Shot Guns with My Teenage Daughter by Daisy Luther of the Organic Prepper Blog.

Guns are the greatest equalizer.

It was after supper when the dogs in the back began barking. A car had come down my long private driveway and pulled to a stop. I live way down a long country road, and my driveway is the last one on the road. Uninvited visitors are extremely rare. We’re too far out there for the usual smattering of Jehovah’s Witness, little girls selling cookies, and neighborly drop-offs of homemade jam.

I looked outside and saw that two men had gotten out and approached my daughter while one waited in the driver seat of the car. My daughter, 15, was doing some of the after-dinner chores. I had a bad feeling immediately. I knew it because I was adamantly told by that gut instinct that doesn’t hint something is wrong, but pounds your heart like a drum to get your attention, and screams it inside your head.

I stopped for just long enough to grab my loaded Glock 19 and for the first time since purchasing it, I racked the slide and chambered a round for a reason other than target practice. For the first time, I did so because of another human being. I did so because there were 3 men out there with my child and they were bigger than both of us. They were undoubtedly stronger, and we were outnumbered, and I knew that there was the potential for something bad to happen.

I stuffed the gun into the side pocket of my hoodie and hurried out. I asked the men brusquely, “Can I help you?”

One was the talker. He was bearded, overly friendly, and ingratiating. The other hung back. He was blond, thin, and moved constantly. I never got a good look at the driver due to the tinted windows in the vehicle. But I noticed the older, beat-up vehicle had no license plate. Another warning sign that this was not right at all.

The bearded one, the talker, told me that his vehicle was overheating and that they needed to come in and make a phone call. I said, “No, you’re not coming in.”

He asked if they could at least have some water.

I wanted to hustle my daughter into the house right that moment and lock the doors and call 911 and wait for a speedy rescue, complete with sirens and flashing lights.

But they were closer to my daughter than she was to me, so that was not an option.

I let them have a bucket of water, even though I could tell that the car was not overheating. The bearded one kept up a friendly patter the entire time, pretending that the radiator cap was hot, jumping back as if to avoid billowing steam that didn’t exist. While he pretended to work on the car, the antsy blond fellow was whispering to the driver.Without me bringing it up, the chatty one said, “Can you believe our license plate just fell off? If you noticed we don’t have one, that’s what happened. We just discovered it at the gas station.”

I finally positioned myself to the point that I was between them and my child. Whether they’re 5 or 15, in moments when you fear for them, they are your precious child, and they are every age they ever have been and ever will be. Any person who has ever loved a child can easily imagine the relief I felt.

“You need to leave.”

The bearded one looked hurt. The blonde one looked watchful. I still couldn’t get a good look at the driver.

“I just need one more bucket of water and then we’ll be on our way,” the bearded one said, putting his hands out in a manner meant to calm me down.

“No. You need to leave now.” I put my hand firmly on the gun at my side.

Suddenly, there was a shift. I wasn’t the one backing away. The bearded guy slammed the hood of the car and walked slowly backward to the passenger side, while the blonde guy got in the back.

I never drew my firearm.

I never pointed it at them.

I never shot them.

But the very sight of my hand on the butt of it, and the fact that I was clearly determined to use it if necessary was all the deterrent that was needed in that particular situation.

Suddenly, a woman and a child were more than 3 grown men wanted to tangle with.

Suddenly, we weren’t weaker. We weren’t victims. We had the power to protect ourselves.

Read the full article here. And also, Daisy Luther's article entitled Why Preppers Need Guns: 3 Reasons Firearms Play a Vital Role in Your Defensive Plan is also worth a look!

With the inevitable post-meltdown Mad Max chaos heading to the cities and towns across the United States, I think she makes some great points about why owning a gun will be a life-saving idea.