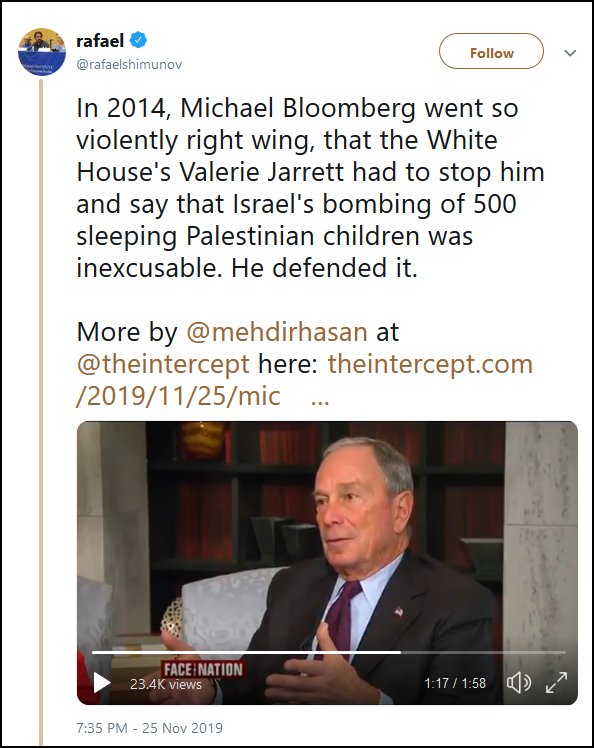 You have to hear it to believe it!

Watch this interview and you will see how absolutely heartless this Zionist pig is regarding the slaughter of hundreds innocent Palestinian children.

He totally approves and justifies this war crime. It made me sick to my stomach to hear this verbal vomit coming out of his devil'ish pie hole (and I have a very strong stomach!).

So guess what everyone, meet yet another heartless billionaire as a presidential candidate who will ensure more funding and slaughter to the Zionists who have taken control of Israel whilst enriching his cronies from the Military-Industrial-Complex, not forgetting his rich Wall Street banking buddies (for whom Bloomberg magazine never exposes the true extent of their criminal activities).

Sadly, for these reasons, something tells me the MSM will push this guy to the front of the line for the ticket. Wait for it....

Time to get the news out regarding this heartless warmonger. Spread far and wide.

Sickening, and expecting any billionaire to be on the side of ordinary people is insanity at it's finest.

Have you seen his ad that is being pushed all over YouTube. "He [Bloomberg] will increase taxes on the rich..." LMFAO!

Do they really think even lefty libtards are that gullible?

Yes I think they do, those that are detached from reality,

Looks like I am going to throw myself into a pot of boiling water...

We talk about PC destroying our world, but when we go on and on about not doing this or that for moral reasons - which have not been reasoned, because it is what WE believe, it is not being PC?

I can see an argument being made that Bloomberg is wrong for this and that reason, and I would want the reasons so as to decide for myelf. By a poster telling my again and again that someone is heartless, it does not convince me. Give me the reasoning so that I can judge him - and you mr poster - instead of expecting me to blindly (without having the right to use my own reasoning) allow you to use emotional imagery/arguments so as to spark a reaction from me. Is that not what the globs want from us? If our side believe in this way of imposing a slave-mentality on us, then I might as well join Sanders, since he at least pretends he will give me lots of free stuff. Our side demands I work for it! Me work!? Oh boy!

Let us begin from some basics:

** I have read of plans the zionist jews have for expaning the size of their country to triple what is is now. Maybe it is so, but what is happening now is not because of the jews rushing to bomb and kill palestinians, but more often, in response to the attacks and deaths of their own which they have to endure.

** Many plans have been made to settle the palestinian/jewish problem, but the palestinians were never willing to help establish rules WITH the intention of sticking to them.

Do you REALLY care about the children being bombed and raped and mentally retarded? Then why are you not fighting to save your OWN children?

The same people attacking Israel are attacking our countries and people also - the globs, with their tools the moslems.

In other words, they are out-breeding us and killing and raping our children, BUT because they say it would be immoral of us to do the same to them, we sit on our hands?

I prefer to adopt the rule: You kill one of ours, we will kill anything between 100 to 1,000 of yours. That helps swing the balance of their breeding advantage, while it also helps give us back some dignity.

If, like the father of that arshole knifed in London recently, we are so brainwashed that all we can say is, it is evil to hurt anyone so we must not fight back...then I plead for the following:

Let's carpet nuke the entire planet, from babies to adults. Let's get rid of all of mankind, for nothing remains that is worth saving.

Everyone has to have their own thoughts, I see no problem with that, but I see the UK, my own country, being, has been, is, turned into a safe haven for Muslims, and all minorities, my mother is 77, she has no voice, she is not allowed to speak up.
She is not a minority, there is a bigger picture, you have not seen it yet, and that London bridge hoax was just that, A Mi6 insider false flag, to get people screaming on FB how much they hate Muslims and support the police that tax them when they drive, yet never turn up for a burglary.

You need to live there, to see what is going on, and it aint pretty, trust me!.

I am aware of some of what you say as I too have family there (the niece was raped when she was about 15).

I have a feeling that for you to give me the above explanation, it means I did not make myself clear.

What I was saying is, if someone is threatening or harming your loved ones, taken to the broad context of race and fellow compatriots, you do not hold back from destroying them as effectively as possible. If their children get killed, well, their own parents placed them in line of fire.

I would say the Crusaders did not finish the job as they should have. Just as even the anti-moslem parties only talk about stopping more from coming, not anything about how to get rid of the existing invaders.

We used to shoot people trying to cross our borders. I'm waiting for that, but in the meantime,
here is a brief quote of some news today:

The new field hospital in the Gaza Strip is currently being built with the help of Friendship, a US NGO, as well as partial funding from Qatar. The hospital, which is being constructed near the Gaza-Israel border, will provide medical services to thousands of Palestinians in the Gaza Strip.

Jamal Nasr, a representative of the Palestinian Democratic Union (FIDA) party went as far as claiming that the new hospital will serve as a center for spying on the Palestinians in the Gaza Strip. "This is a suspicious project," Nasr said. "It can't have any humanitarian purposes. It's actually a base for intelligence gathering."

Abbas and his senior officials are seeking to prolong the suffering of their people in the Gaza Strip so they can continue to blame Israel alone for the crisis there. By calling the hospital a "spying center," they are also endangering the lives of the volunteers and medical staff, whose sole "crime" is providing medical treatment to Palestinians.

The next time anyone talks about the harsh conditions in the Gaza Strip, the world needs to realize that those who are trying to block aid to their people are the Palestinian leaders.

As I was indicating, I do not like Bloomberg, but I refuse to play the game of throwing mud at him for saying what is practical and necessary. He was right, getting rid of all of them is the only permanent solution

Also, we should never forget that the palestinians are arabs, moslems and they are part of the move to destroy all whites and our countries. I refuse to allow myself to feel for their kids, any emotional spikes I allow, must only come from seeing what they do to our kids - and I keep asking myself, when is someone going to do something about it?!

I will get back to you on this, I tend to take a day to reflect, to think.

I will tell you this though, digest it how you will, I am of Jewish dissent, not Zionist, I resent them, I am not for any system that oppress anyone, we are all people, and if someone thinks they can over power me, or any of my off spring, they better be able to fight or bring a bigger gun than me!.

Zionists, and poli-ticicians play people for fools, you are playing into their hands, divide and conquer! 2000 years of this crap, someone has to wake up, and it is not me.

I just watched this and felt it is what you would want to watch.

They have this under control

Nice graphic. Says it all, doesn't it? Recent news also showing more theft of land by Israel in Hebron, supported of course by the Trump admin. Sickening.