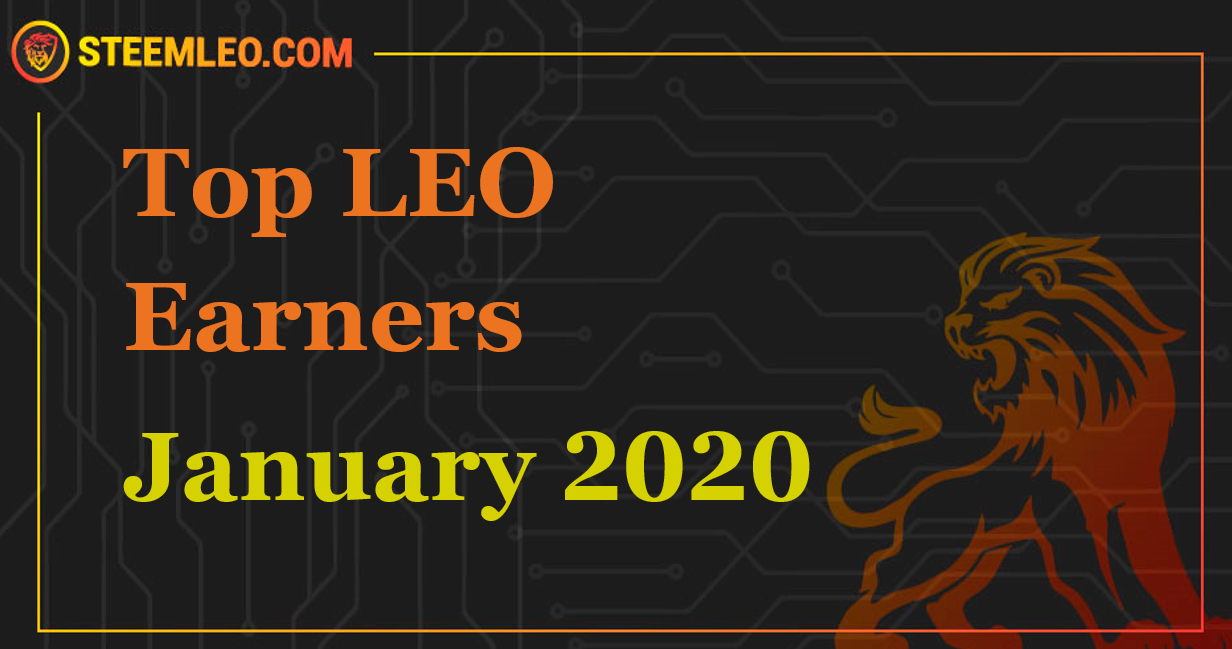 The following topics will be covered:

First a chart on the daily tokens issued, to have an idea for the numbers of the reward pool.

Compared with previous months where there is on average 145k tokens issued January is a bit up. This is due to the Steem Engine settings changes on claiming tokens. They have automated the process and now tokens are claimed daily. On January 23th when this started more than 22k LEO tokens were claimed in one day. Going forward the lag between issued and claimed tokens will be no more and we will see a smoother daily distribution.

A chart on the top 30 LEO earners.

Here is the table:

On the first place with 5.5k LEO is the @rollandthomas . Next are @dtrade and @taskmaster4450.

The top 30 accounts have earned around 84k LEO tokens. Out of the 184k this is 45% of the total reward pool. The number is the same as the previous month.

Note: The @leo.bounites account is excluded from the list as it transfers the issued LEO to the SP delegators. A separate data for it will be presented below. It has 39k issued in January 2020.

Let’s take a look at the top accounts that earned the most from mining LEO.


The @flipstar account and @kwonjs are in close competiton for the top here. Next are @steemstreems and @seraphim502, are well know LEO miners as well. They all hold a significant ammount of LEO miners.

A total of 46,719 LEO was rewarded to SP delegators in the last month.

Note that these are not all newly created tokens, but tokens transferred from the @leo.bounties to the delegators. This reward pool is a mix from tokens from leo official accounts, tokens from the market and tokens issued for this purpose.

I have compiled all the stakes from the explorer to get the overall top LEO holders, including, balance, stake, unstake and delegation.
Here is the table.

The unstaked column is removed for better visibility. There is unsigificant ammount in that column.

The @null account is excluded from the ranking. Those are burned tokens.

The list above is for the LEO holders. Some of them have delegated their stake to others account that are managing their LEO stake.

steemleo - A Next-Generation Community for Investors

Out of the 184k this is 45% of the total reward pool. The number is the same as the previous month.

If memory serves me correct, this was over 50% just a few months back. Good to see it coming down.

It definitely seems to be widening slowly. I hope to see it trend in that direction in the months & years to come. A bull market would definitely accelerate that imo

LOL the top 30 earn more than my entire holding of LEO but well done to everyone contributing and making leo a cool place to find content. How's the traffic been? Is it earning you more from ads that can be used to burn :P

Lol. Yeah the distribution is a bit centralized.. Luckily, it's spreading out over time and will (hopefully) continue to spread out as we get more users.

The traffic has been growing steadily. Especially when you take both https://dex.steemleo.com and https://steemleo.com in conjunction.

I've been planning on putting together an ads report to put out each month. Will hopefully get that up and running soon, then everyone can see how the ads impact the LEO price over time and also encourage some of our regulars to turn off their ad blockers/lower their brave shields and Opt-In to ads on Steemleo because it helps the token economy so much.

Will be interesting to see how tokens get spread out with the miners too and comparing tribes with each other and steem to see whose model had the best distribution, best % staked etc

Oh cool how many ad networks are you running on steemleo? I’ve been using adsense, Viralize and Moneytizer been adding other networks but those 3 have been my best performers

LEO seems like a great token to invest on...