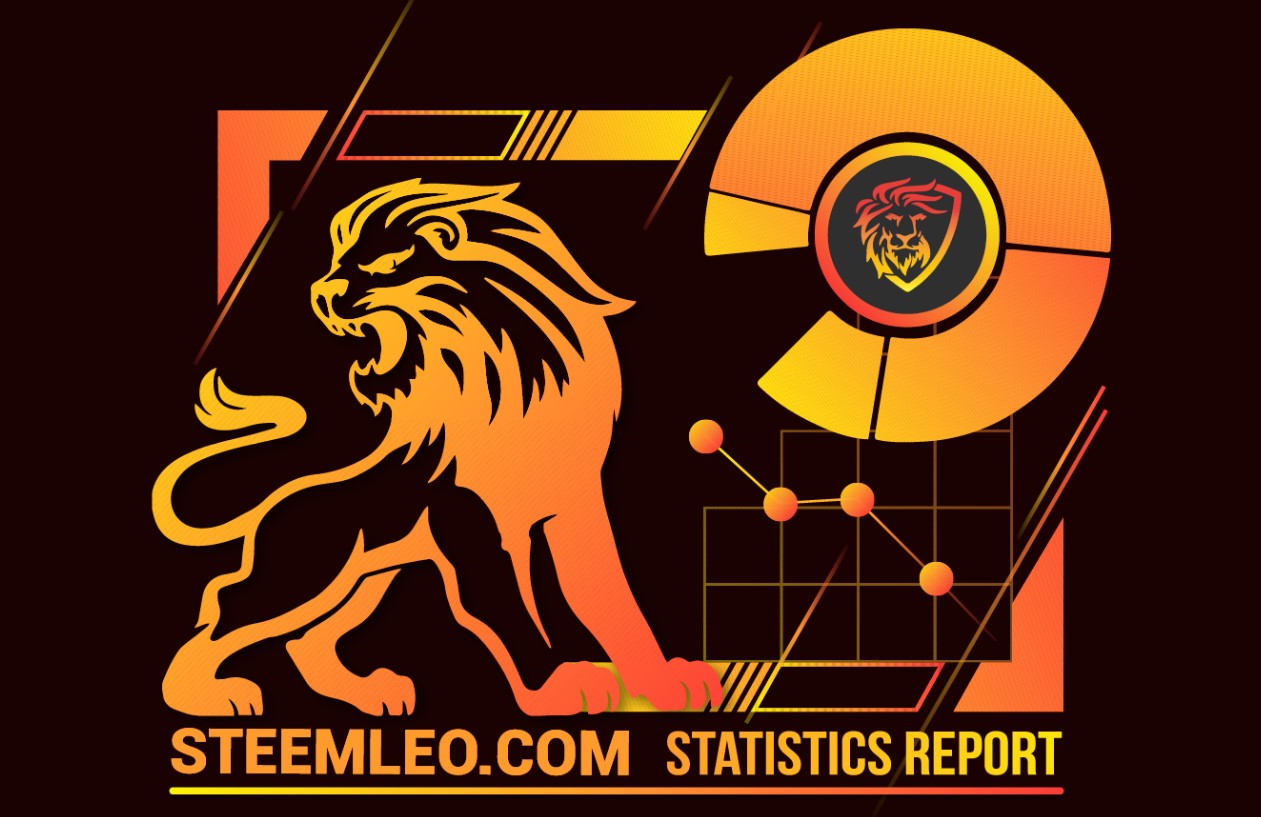 Welcome to the weekly edition of Steemleo stats. This is no.14 @leo.stats report.
If you want to know a bit more about the Steemleo platform and dig into the numbers, this is the place to be.

This week highlight: We have new addition to the @leo.stats report, tokens issued and top earners for the week. Also, following the increase in the @leo.voter SP over 500k, we are now seeing increase in activity on the steeleo.com.

The following topics will be covered:

Let’s take a look into token distribution, inflation and how it is distributed.
Below is a chart that represents the cumulative issued LEO token.

A total of 4.99 M issued LEO tokens.
We can notice that the LEO token doesn’t have a large inflation compared the base supply and its slowly increasing its supply. Note that burnings are not taken into consideration in this chart. That will be presented below.

Next the issued LEO tokens from last week. Here is the chart.

Issued tokens are claimed token that are put in circulation. They are different from the inflation.
On average there is around 5k LEO tokens issued daily. In the last week there is an increase in the issued tokens due to some large claims that happened. A total of 47.8K were issued in the week.

Let’s see how these tokens were distributed.
Below is the chart of the top 10 LEO earners in the week.

Issued tokens are claimed token that are put in circulation.
The no.1 is a @leovoter with 5.1k LEO earned, next it is @leo.bounties, with around 5k LEO, then @rollandthomas with 1.5k earned. Congrats!

The @leovoter account to my knowledge is not an official account of @steem.leo. It is a curation alt account, and these tokens were claimed last week. Doesn’t mean they are all earned in the week. Next is @leo.bounties that is an official account for rewarding delegators to @leo.voter and on the third place @rollandthomas.

Soon we will have the monthly earning report for October with more details.

Below is a chart that represents the daily movement of staking/unstaking of the LEO token.

Note
The first five days are excluded from the chart for better visibility. In those days there is a total of 1.6M tokens staked.

The LEO token has a great statistics on tokens staked. This trends still continues.

The chart for the last week looks like this.

Each day of the week is net positive in staking!
is the table.


A total of 51,832 more LEO tokens staked last week. Even though there are some large beneficiaries from the airdop that are unstacking the numbers are great.

Below is the chart of the top 10 users that staked last week.

Here is the overall chart on LEO tokens supply.

We can see that the staking is increasing over time, the liquid supply is going down. The burnt tokens also are taking a bigger share with the monthly burns showing the big drops. The sell wall is slowly disappearing.

Below is a chart of the ratio staked/unstaked tokens, excluding the sell wall that at the moment have around 1.4 M tokens.

90% tokens staked
The share of tokens staked remains around the 90%. This is a great result having in mind that every week there is more tokens rewarded but the LEO users are staking them.
It seems that the LEO token found a balance around the 90% staked since this number is stable for a month’s now.

Burning tokens is an important metric as in a way it is a anti inflationary measure and it shows the use cases for the token or sinks.

The vertical Y axis is on a logarithmic scale for better readability. In the period analyzed a total oalal of 933k tokensburned. The large share of this 900k tokens are due to sell wall burn, and the nopal4you account of 100k tokens.
The rest esest of 33k tokensrom the sinks for the LEO token and that is a nice number.
In the last week there was more burning of the LEODEX, that is burning LEO for listing on the exchange. Great one.

Steemleo is slowly growing and we are proud of every new user that comes to our platform. Bringing new users outside the Steem ecosystem is our priority.

Below is a chart with the number of unique users that posted on Steemleo.

A total of 2720 unique user have posted with the #steemleo tag till this date.

Next, a chart for the new daily users in the week.

A total of 41 new users. These are users that made a post for the first time with the #steemleo tag.

We can see that the majority of the posting still comes from other interfaces with the tag #steemleo, but there is a small increase in the last days on posts from steemleo.com

In the last period Steemleo is trying to incentivize users to post from the Steemleo interface rewarding authors who use the interface with vote from the @leo.voter.
Here is the chart only for posts from steemleo.com interface.

The total number of activities (posts and comments) is show in the chart below. Data for each day of the week was collected and presented on this graph.

These are all the posts and comments that have the #steemleo tag in them.
**The total number of posts on Steemleo in the week is 1966 and 1988 comments.

The @leo.voter account is being converted from a bot to a rewarding accounts to users who use the Steemleo.com interface. Here is the chart.

We can see that there is increase in the voting since now its being used to reward users who use the Steemleo interface.

Here is the price chart with proper daily candles.

We can see the spike in the price on 14th and 15th September. On those days the price reached 2 STEEM per LEO.

steemleo - A Next-Generation Community for Investors

Great post as usual...what the rationale for the Nov 2 and Nov 3 being the lowest days of the week?

As mentioned the average issued daily tokens is somewhere between 4k to 5k. From that pespective last week is a bit non standard.

The days with low tokens are when users dont claim their rewards.

Claiming is basicly claiming rewards. The same as when users claim STEEM rewards. Only after claiming the LEO tokens are liquid and can be transferd/sell or staked.

These numbers look sexier and sexier with every passing report ;)