What's going on in the economy after the interest rate cut? 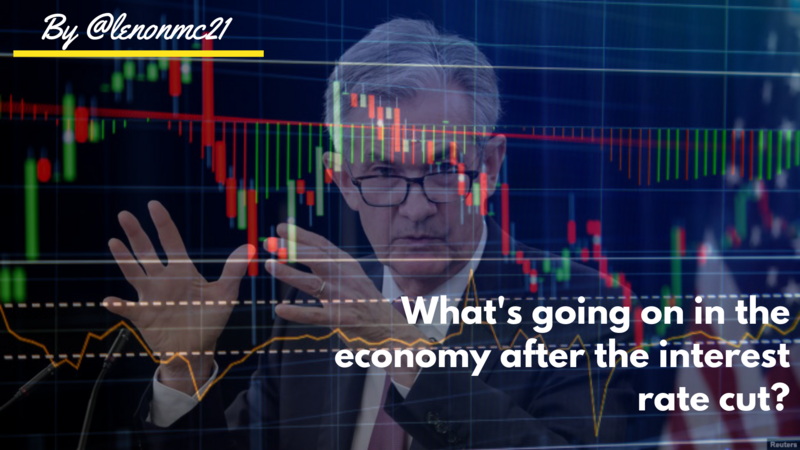 The U.S. trade war against China is intensifying, a few days ago the U.S. Federal Reserve cut its interest rate by 0.25 points, but because of this the question arises: how has the economy behaved in recent days? That is what I will delve into in this article, because despite the fact that those of us who are speculators in the financial and crypto currency markets, this situation undoubtedly provides quite predictable investment opportunities and we will see why.

To all this is added a very important news and is the creation of Bakkt's physicists futures, which would bring a very high probability of a very important rise in Bitcoin prices, since recently more formally have announced that their futures very possibly can start in the third quarter of the year, in mid-July announced that they would begin their tests, which are running with the approval of major U.S. regulators.

After the interest rate cut, the Dow Jones has suffered a sharp fall, the worst so far this year, also other indices such as the S&P500 and Nasdaq accompanied it and all this is thanks to the latest actions taken by U.S. President Donald Trump and the aforementioned trade war between these two nations.

Now, why is this war intensifying and the tension between them?

The answer is simple, Donald Trump does not reach an agreement with China, what we all sense is that the president of the USA believes he can bend a nation like China and it turns out that this is not so easy and what you see at first sight is that the situation is getting worse and worse, assuming that by increasing 10% of these rates, the evidence is that the negotiations are worse than ever and it is for this reason that the stock exchange and traditional markets see this setback, almost that sung for all investors in this type of assets.

### What was China's reaction to this situation?

The Chinese government, faced with this rather tense situation and seeing that it is increasingly difficult to reach an agreement, has allowed the Yuan to devalue above 7, in short, that "1$ costs more than 7 Yuan, which has not happened for more than a decade. In this sense, they have literally devalued their currency, but in order to be able to have greater purchasing power within China for imports, already knowing that the negotiations are not progressing correctly what indicates is that they do not see progress between the two nations and this would predict that everything will continue to worsen in the medium term.

To all this is added a tweet from President Trump, indicating to the FED that they are very attentive to the issue of price manipulation that China made, this would mean as a wake-up call for them to be attentive, since the most likely is that they will also have to continue lowering interest rates, devalue the dollar, in order to continue stimulating the economy, because under all this environment may not hold and there will be new measures that can be taken soon.

## The reaction of Gold and Bitcoin

Technically speaking, analyzing the BTC and GOLD charts, there was clearly an impressive noise due to all this tension, as they remained in a range where no clear decision could be made, at least partially of where the price could follow, even though its main trend was known, but that thanks to the cut in interest rates, the stock market recession and the trade war, clearly these fundamental aspects were more than clear that would drive Bitcoin and Gold as assets of refuge and safeguard of value, this was what we saw and is therefore the impulse in both, I would say that they are the easiest entries that have been predicted throughout the year.

It is also clear that Bitcoin is the refuge that the Chinese have to safeguard the value of their money and everything fits perfectly with the current devaluation of the Yuan, leading all the inhabitants of China to seek to buy Bitcoin in Premium, which for those who do not know that it is "Premium", means acquiring an asset at a higher price than the market quotation, so it is evident this latest impulse of the BTC.

Things are not good in the economic aspect, due to the economic war between the United States and China, as I said, this was what caused both the decline of the stock market, and the momentum of Gold and Bitcoin, but before all this scenario the questions would be:

It is necessary to emphasize that, if they take out these tariffs, the opposite can happen to these last events, it can improve the situation for the stock exchange and for the economy and it would suppose a possible retreat of the Gold or the Bitcoin, nevertheless, the latter is not only supported by this war, if one other series of fundamental ones also, so we must be very attentive to everything that happens and of course try to take advantage of all this in investments.

Whenever I read stories about fiat economies and horribly corrupt they are, it reminds me of the value of crypto and Bitcoin to take the power out of the few who are corrupt and redistribute it to the many who are incorruptible as a network. Awesome write-up!