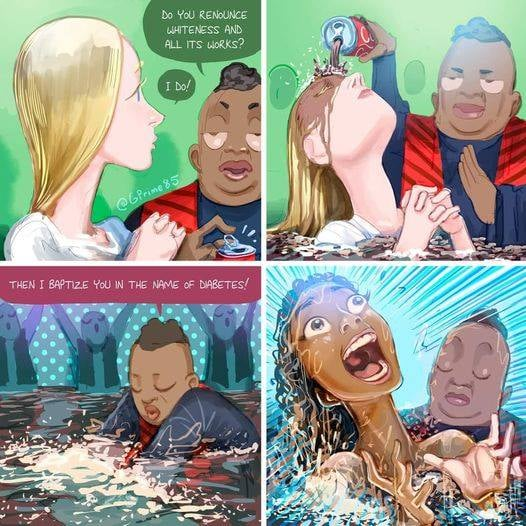 I had a discussion about white people denouncing or being ashamed of their race, and a thoughtful friend made a great remark:

"I still don't understand why my "race" is important to me. I understand that my cultural teachings and influences are wonderful, but I think those can belong to anyone who chooses to study and love them as I have."

I absolutely love this point. I've been trying to drive home the point that Western Civilization is not the possession of people who happen to possess a certain skin pigment or genetic trait but rather it is a constellation of ideas, principles, values, and customs that can be adopted by anyone. It's a way of life that colors everything we do, not a skin color that determines who we are.

People generally get along quite well when they share values, no matter their race.

Now, I suspect that by affirming your love of our shared inherited cultural heritage, you aren't even attempting to deny past oppressions of blacks or that current racism does exist, but rather you aim only to make the point that values and behavior are truer indicators of identity than mere skin color which can be correlative but not causative of reverence to values and mores. -And that is something with which I wholeheartedly agree.

Sadly, not enough people of all colors see it the way you and I do.

The problem with your remark, of course, is that many people wish to make their race extremely important, even of primary importance, to their identity so that they can play the race or victim card in order to extract benefits or advantages, and your refusal to allow them to make their identity primarily about their race (or their gender, or their ethnicity or other form of politicized group identity) is that it denies them the opportunity to play those cards and thereby make a claim against people in outgroups.

In today's world, your unwillingness to "recognize" their race as the primary factor to their identity is considered violent psychological oppression to them and a sign that you are merely perpetuating a social construct that benefits you so much that you don't realize the privilege you have merely because of your "race."

Furthermore, you had better not dare to ask, then, how one's race determines the values one cherishes and how certain values are white, or ask which values are black.