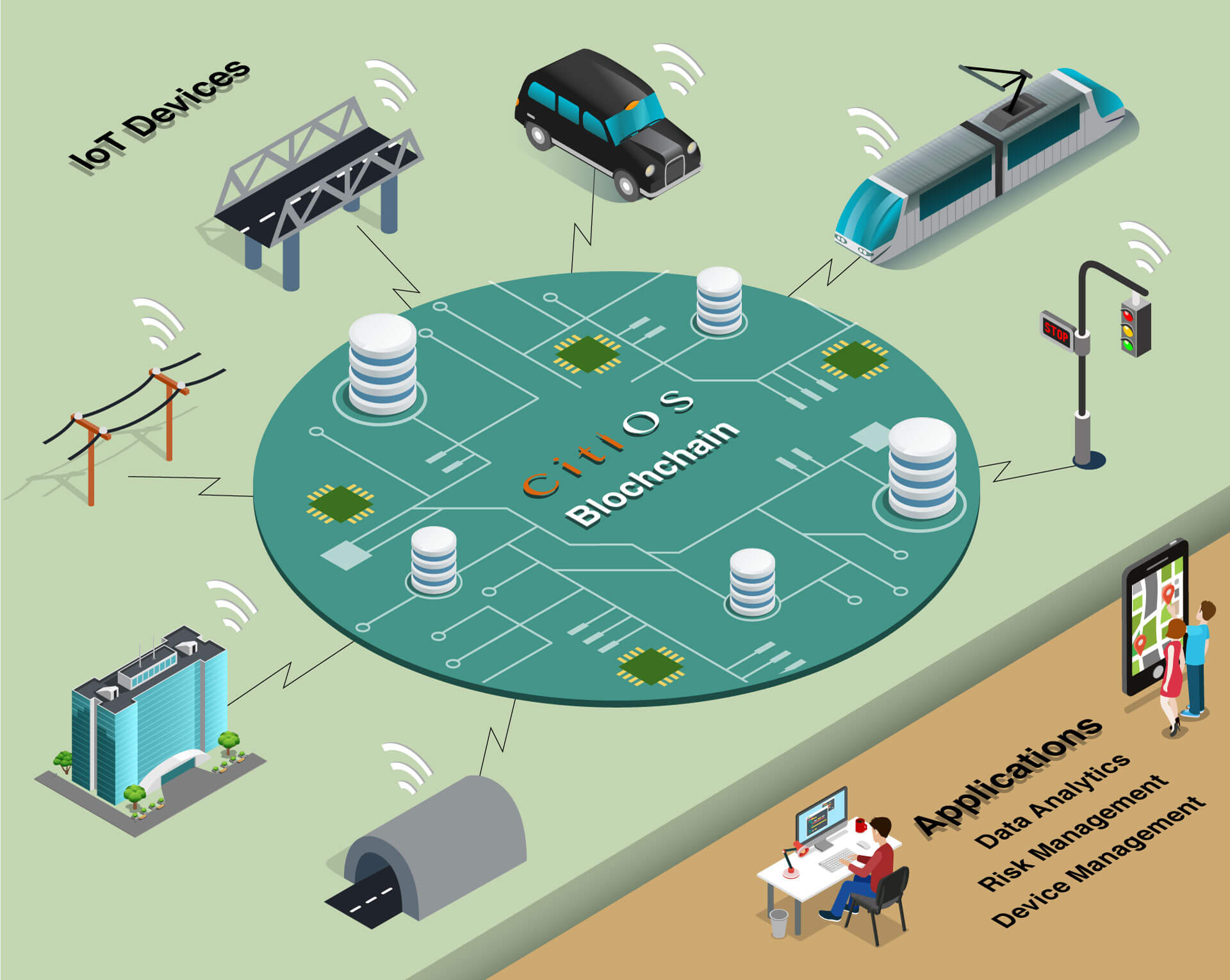 Have you ever heard of smart cities where activities like traffic, public services and document management are fully automated? The smart city concept integrates big data and the Internet of Things (IoT) to optimize the efficiency of urban activities and services as well as connect people with people. An example of this innovation is a light sensor that saves electricity and cost of keeping track of street traffic. That is also the main purpose why CitiOS – a blockchain based autonomous IoT security solution service, is built and developed.

In general, CitiOS will focus on developing CAAS (City As A Service) and Micropayment. In particular, City As A Service is a city where everything is automated in the range of resource administration, data management and risk control for enterprises, government and many other industries thanks to CitiOS's Edge Computing and AI Chip Embedded products. Along with the expansion of urbanization, the cost of relevant things such as workforce and salary also linearly increase. Therefore, CitiOS issued R2R - their own native token which run on Ethereum platform using smart contract to ensure the clarity, high-speed transaction, no hidden fee and transparency of every process. More importantly, R2R can be purchased in any P2P data exchange such as on top digital assets trading platforms. Nevertheless, in this part of the article will introduce the two most important decentralized applications that CitiOS will provide for smart cities. First of all, CitiOS already affiliated with mtes Neural Networks Co.,Ltd who is an inventor and supplier of AIoT Smart Street Light, hence, CitiOS will have the full right to sell and do advertising for this product. It worths to remind that there are very less blockchain projects that have a real product, which is already in production like CitiOS. In this partnership between CitiOS and mtes Neural Networks, CitiOS will have responsibility to provide blockchain technology and mtes will play a role as AI (Artificial Intelligence) /IoT/IT technical backing and technology with the purpose of providing a full set of smart things range from light, compressed image data, smart device charging service and IoT wireless communication. Not over yet, there are four main features of AIoT smart street light that make it ahead of its peers. Firstly, unlike other smart lights, CitiOS’s AIoT with AI camera can identify multiple targets at the same time. Secondly, it will fully operate by solar energy, this is very important in helping city to save electricity. Thirdly, all of the data received will be stored on LoRa – a private blockchain network designed by CitiOS, thus, citizen will be risk-free from nervousness of leaking their personal data to public. Fourthly, citizen can also access internet network everywhere there is AIoT. Last but not least, it will be able to provide power also thanks to its own energy get from integrated solar panel.

The second noteworthy dApp of CitiOS is Structural Health Monitoring which uses sensor networks covered the whole city for analyzing defects to city’s infrastructure. Today, natural disasters such as earthquakes and floods occur all over the world causing great damages to people and property, especially in coastal countries like Japan, natural catastrophes occur almost every year. Therefore, early detection and repair of infrastructure is almost mandatory. Nevertheless, these activities require a big load of workforce and efforts. With structural health monitoring dApp that operates on state-of-the-art blockchain technology, it can incredibly cut down this manual laborious attempt. Moreover, the best thing it can do is to help avoiding casualties of people.

CitiOS is one of the best smart city projects, hence, they were well-prepared with their detailed roadmap since 2018. From 2018, they have already built first prototype for AIoT street light and R2R token was also available in the wallet. Olympic 2020 will occur next year, thus, CitiOS already cooperated with Tokyo police for 2020 Olympic pilot run in March 2019. This rehearsal last till April 2019 with the testing of AIoT street light and Ueno Park is where to be selected for the pilot run. Regarding Structural Health Monitoring, CitiOS had the first pilot run for this dApp with CitiOS techonology in May 2019. As a result, SHM was chosen to be implemented with Japan’s biggest railway corporation in June 2019. In the second half of 2019, CitiOS focused on AI by making partnership with data implementation company for machine learning in July 2019. In addition, they also linked AI Box and Cloud AI with middleware “apricot” a month later. There is good news that this Apricot platform was available for official use in Sep 2019. In the last month of the year, along with IEO, CitiOS’s platform service will be available. For this reason, CitiOS will allow their partner to add their service and dApp into project’s ecosystem.

CitiOS deserves our attention with qualified team and good products in the field of blockchain. The objectives of this project are clearly explained with reasonable facts that is to build Citi As A Service with real use-case and solution. If you are loooking for transparency blockchain project with adequate teams support; excellent and unique platform with good UX/UI; real use-case that can lead to massive adoption, CitiOS is the best for you. Having professional and well experienced teams to back up the project, it is going to go far beyond our expectation and it will definitely take the leading place among its peers.