The world's longest bridge across the strait. 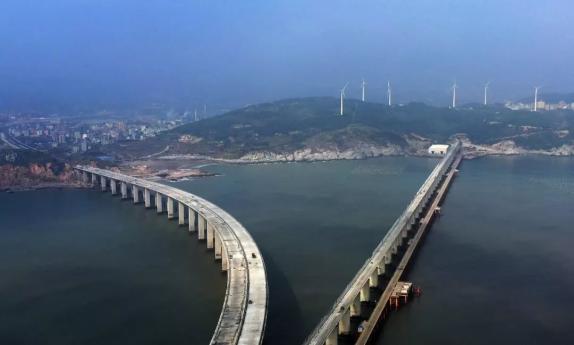 Read "The world's longest bridge across the strait." on TravelFeed.io for the best experience

News feeds were full of colors when the last beam in the world's longest bridge built across the strait was put in China.

Now, from December 22, the first railway sleepers were laid here, about to soon launch trains on the new bridge.

For those who missed information about this bridge, who do not follow, who were not interested, and now it has become interesting, I will write a little about the bridge.

I think it’s no secret to anyone how many roads, bridges, junctions, highways China builds every year.

China now ranks first in the world in terms of the number of paved roads, and in quality, I will tell you, too.

For example, almost all the bridges that are being built in China have a sign standing next to them, which indicates 40 tons that are allowed for transportation on it.

And most tunnels have only one direction with 3-4 lanes, and the mountains are dotted with two tunnels at once: one tunnel in one direction, the other in the other direction.

So, the world's longest bridge across the strait.

Firstly, it is a 16.34 km long auto-rail sea bridge across the Taiwan Strait. He connected the Pintan island county with the city of Fuzhou in the eastern province of Fujian.

Secondly, it is a two-level (two-story) bridge. Yes, yes, do not be surprised.

The upper level is designed for road transport, through which cars can move at a speed of 100 km/h.

The lower level is designed for high-speed trains, at a speed of 200 km/h.

In September 2019, the construction of the bridge was completed, the last beam was delivered, the length of which is 17 meters and its weight is 473 tons.

And on December 22, rail laying began.

When commissioning this bridge, the trip time from Fuzhou to Pintan will be significantly reduced and will be only 30 minutes, instead of the previous 2 hours, and the delivery of goods from China will become much easier.

As for the bridge itself and its construction.

A few words for those who constantly write that it is easy to build bridges in China, they say, the climate here is different, that the weather is different in China (minus 30 in the North, by the way, in the South there are constant typhoons, up to 30-50 pieces per season from May to October, showers and mudflows).

Construction began in 2013. Construction in the South China Sea due to extremely adverse weather conditions, frequent typhoons, strong heavy winds, is very difficult, and the project is considered quite complicated in technical terms.

The South China Sea is considered one of the three most dangerous seas in the world. Sea transport in the region is facing threats, compared to Bermuda and the Cape of Good Hope.

That is why construction has been going on for so long.

Yes, 6 years of construction for 16 km of a two-story bridge in China is a very long time.

The bridge is planned to be commissioned in 2020.

A few photos from the construction of the bridge.

We are waiting for the delivery of the new bridge.

By the way, for those who do not know.

If you don’t know anything about the fact that over the past 10-15 years, China has built up the whole country with bridges, 2-3 levels of highways, highways for trains at a speed of 300 km/h, rammed all the mountains with tunnels, just look at China on the Internet from a bird's eye view or from satellites. Then look at the same Germany, for example, about which there is still a mime about good roads.

And look, do not mix up where on the map what. 😁