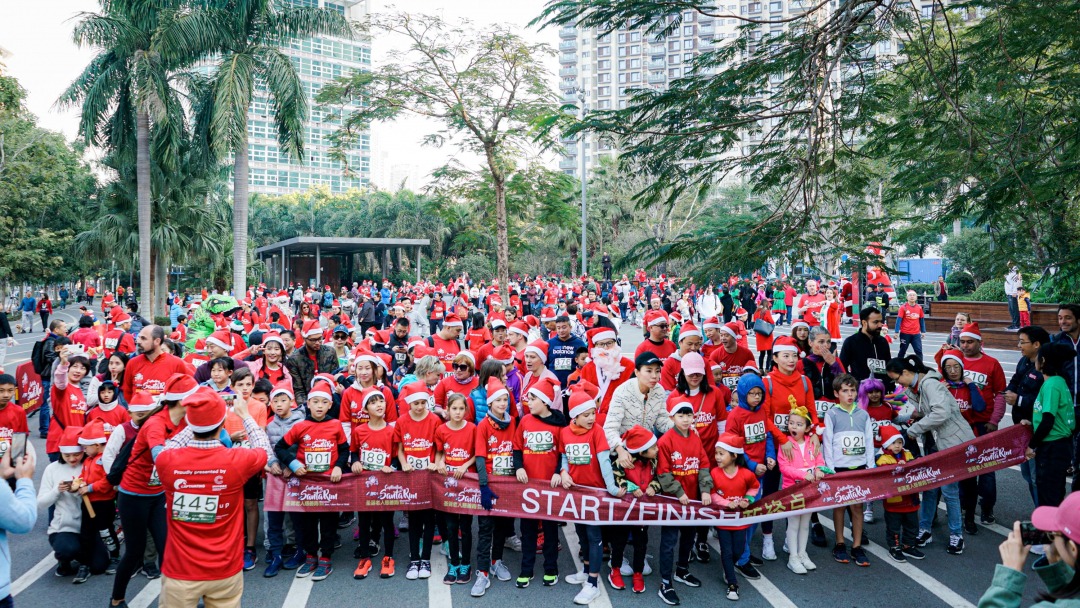 I don’t even know whether to call this marathon my first one or not.

I thought and thought, and decided that I would still call.

Why is it still not a full-fledged marathon?

Because he is a holiday charity.

Because the distances are purely symbolic: 3 and 6 km.

Because all children receive gifts, and, it’s even more likely to say, a children's holiday with a race and gifts to all-all-all.

Why can I still attribute this event to my first marathon?

Because the whole organization is completely the same as at large marathons (which I have not yet been to), with the issue of a participant number and a T-shirt to everyone.

Well, since there was a registration, a race, a finish line and awards, then it was a marathon.

So, congratulate me and my husband, too, on our first official marathon. Even if only 6 km. 😁

You probably also notice a phenomenon such as a change in the space around you, if you have changed something in your life.

That is, just that rule: "Start with yourself, change yourself, and the reality surrounding you will also begin to change."

This is happening in all areas.

If you started going to the gym, then you will surely grow into those who also go to the gym.

If you quit smoking, then it suddenly turns out that a huge number of people around have not smoked for a long time, quit, and, in general, smoking is harmful.

If you are addicted to alcohol, you suddenly find out that many around you are also teetotalers, do not drink alcohol or drink very rarely and little, and it turns out that alcohol is evil.

Or you became a vegetarian.

So it is with me.

7 years ago, I started jogging and fitness (I can’t name sports). Therefore, around me, those who go to the gym swing, run, and so on.

And in general, I have friends (now moved to our area), whom I know about 10 years in China, who generally constantly participate in all the marathons surrounding us, in triathlons, even including the "Iron man".

And, of course, all these wonderful people are motivators for me.

I’m going to write a series of articles about how I started running at the age of 42 to be a motivator for someone who wants, but is afraid that age is already Further.

Mom and mother-in-law of these wonderful marathon runners I knew started to run at 59 years old, and at 62 years run full marathons at 42 km.

For 3 years. No problem. Now she rides marathons everywhere and runs regularly.

Every year and every time I was asked about the marathon, I said that I would never run marathons. Why do I need them?

And here familiar marathon runners from Shenzhen moved to our region a year ago.

And then I start to communicate with people whom I also know about 10 years old, and who also moved to us, and find out that they have been running marathons for about 3 years now.

And then I see other people who are also running.

And there is a motivation: "But me? But what about me?"

So, now for the first time I realized that I was mentally ready for the half marathon of 21 km, but not yet physically.

Physically, I can run quarter-marathons of 10 km, which sometimes also happen, but rarely. I can run 10-12 km freely, without stopping, but I haven’t tried it yet.

So my husband and I started with a festive New Year's charity little almost children's marathon to see how all this is organized.

So we discovered the marathon.

Now about the marathon itself.

It was an annual charity run in favor of the Captivating Charity Foundation, based in China.

The running cost was 150 yuan.

On Saturday December 7th, 700 people, 700 Santa Clauses, and 50 volunteers gathered on the waterfront in Shekou, Shenzhen for the 3rd annual charity race of 3 and 6 km.

And it was spectacular!!!

Many came in suits, and ran in suits, for which prizes were handed out at the end of the race.

We did not know anything about how and what was organized.

When registering online, we were given the numbers of participants. 518 and 519.

It’s good that Anya told me that they should come to the post office. Because I thought that registration takes place somewhere there, on the spot, when you come to the marathon.

It turns out, no. Everything is much more thoughtful and organized.

The number is assigned in advance, you arrive, go to the bench on which the packages with ready-made t-shirts and numbers are lying, and look for your t-shirt with your number.

If you don’t know what your number is, you can go to the stand and see. At the stand, the file with the numbers that was sent to each participant by e-mail was duplicated.

Nearby is a large tank where everyone throws packages.

Imagine, we had such a funny incident. We did not know anything, and were in a hurry, since we arrived 10 minutes before the start of the launch.

We took our bags, took out T-shirts and caps of Santa Claus, put them on, took pictures, and went to the start.

And then we look, everyone is standing with numbers, but ours aren’t there.

We looked at each other, and why are we without numbers?

And then it dawned on us that we threw them along with the packages. 🤣

That is, we took out T-shirts and Christmas caps of Santa Claus, and threw out the bags.

We ran back to the tank, as if our packages with numbers were lying there. We got the numbers, there was also a set of 4 pins with which we quickly fastened our numbers, each on our T-shirt.

And, rather, back to where the participants of the race were ready "to start".

Now we were “like everyone else,” in T-shirts, Santa Claus caps, and numbered. 😍

And forward. Along the promenade. Morning, 9 o’clock, sun, blue sky, sea, promenade - what could be better for a Saturday morning marathon?

In vain I was worried, throughout the course there were volunteers in green T-shirts who showed, prompted and encouraged.

The morning bay was beautiful.

But this new constructed section of the Peninsula I have not yet seen.

We lived in this area in Shenzhen for 6 years, when we moved to the seashore, there was a green lawn in the place of these buildings, and we were already starting to fence the construction of new buildings.

"Peninsula" - a large bastard with access to the sea, on the first line.

It has been under construction for about 15 years, there is a 1st, 2nd, and this is the 3rd line.

It looks great. Until the day of the race, I saw only a draft of the embankment with these buildings at one of the exhibition.

And - here you have a living embodied project. For 6 years, these buildings have risen and now look like this.

By 10-00 everyone has already returned.

What a fine fellow! Both adults and children!

Especially women and men who ran with their children in wheelchairs, they run, and the carriage is rolled on the run. In the stroller - a small child.

Someone ran with children in their arms.

Someone ran with the children nearby, then picked them up in their arms.

It was fun and festive.

At first, 250 children received gifts. Everyone came up to Santa Claus and received a beautiful box from him. All the children were happy.

Then they awarded adults in different categories with cups and medals.

It was fun, there were songs, a holiday.

Below you can watch the video from the event, with running, songs, awards.

It’s worth participating in such events!

Perhaps in 2020 I will try my first half marathon, 21 km away, while wonderful runners live next to me, which motivate me to run. 🥰

And in the end - a few videos for the most curious, who read to the end.

The start of the race.

This is a line of kids for gifts.

But with this wonderful singer they all sang.

Awesome post! So awesome we resteemed it and gave you a 100% upvote. Follow us for a higher chance of being resteemed more often. - @theresteemer5000

Hiya, @lizanomadsoul here, just swinging by to let you know that this post made into our Honorable Mentions in [Daily Travel Digest #712](https://goldvoice.club/steem/@steemitworldmap/travel-digest-712).