Bahamas cruise. Our liner "Enchantment of the Seas". 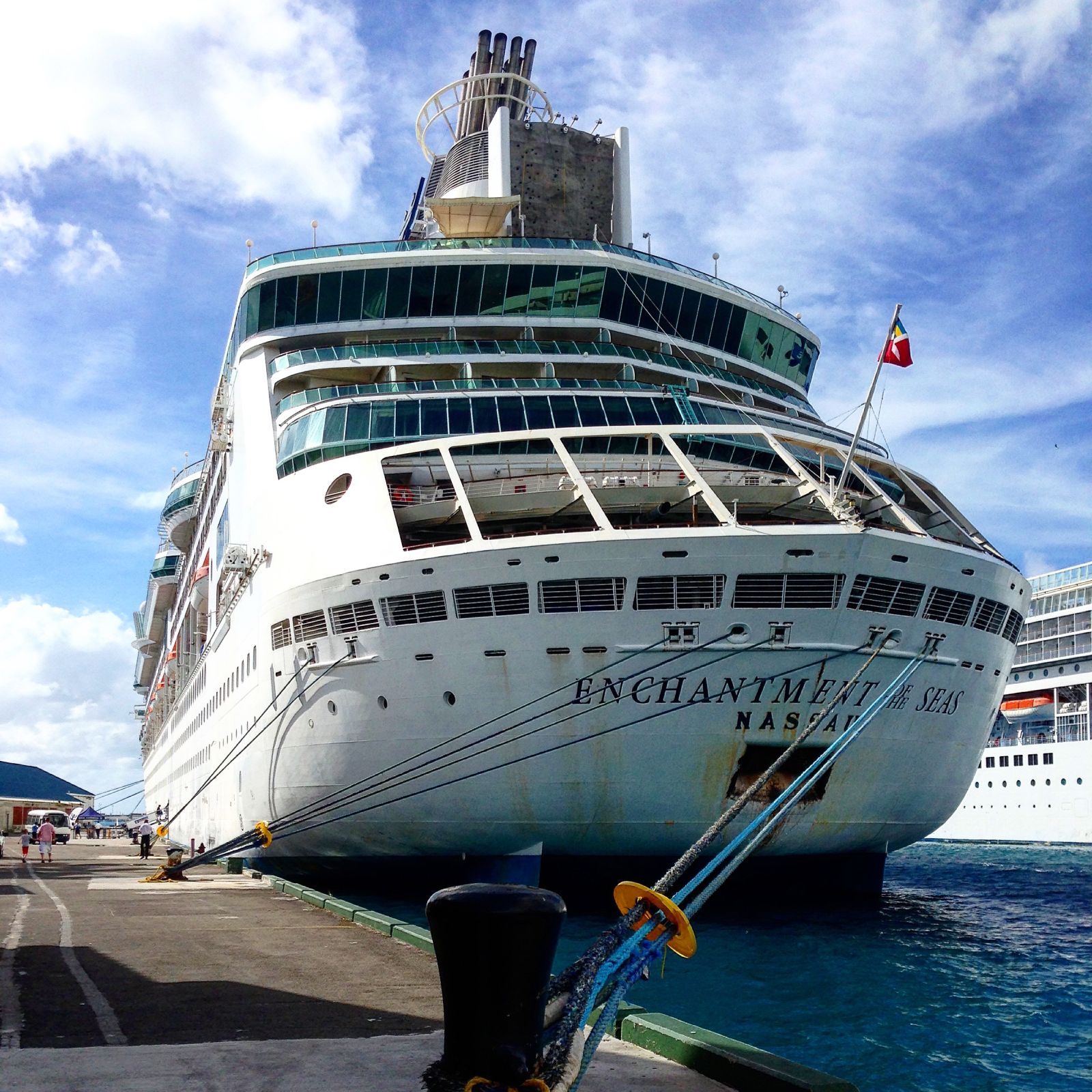 About the first day of the cruise, landing on the liner, read here.

What was my surprise when I began to study cruise liners of the Royal Caribbean company and found out that it was a Vision-class liner with a capacity of 2,250 passengers.

For comparison, the second time in a 7-day cruise we went on a liner by another company, which accommodates 4,500 people.

That is, everything is relative. That's for sure.

But today about the first liner, first impressions, I will not compare it with anything, that's how I went to it, gasped, so I'll write about it.

Let's start about this whopper. Enchantment of the Seas, cruise ship of Royal Caribbean International.

The liner has 3 stars.

In 2005, at a shipyard in Rotterdam, the ship was cut and a 22-meter-long section was inserted into it. As a result, the liner length increased to 301 meters.

You can look on the Internet about how this was done, very impressive.

The video shows how in the toy Lego, they folded and inserted part of the ship in the middle, and you understand what a colossus it is.

In 2017, the ship visited renovation.

A little more about the stardom and status of the liner. The liner has three Berlitz stars.

What does it mean?

Berlitz is the world's most respected cruise guide. It is produced annually since 1985. Posted by Douglas Ward. He personally visited 1800 ports. His assistants inspect more than 280 liners annually. Evaluated by 6 parameters and set points on a 2000 point scale. Points are indexed into stars from 1 to 5+. Unlike hotels, cruise ships do not have an official star rating. Therefore, only Bertliz stars are informally recognized in the cruise industry.

I’ll pay attention immediately to the most attentive people who will start reading the Internet and find inconsistencies with the location of this liner, and then they will begin to convict me of a fake about our cruise. :)))

Our first Bahamas cruise on this ship was in October 2016, from Port Miami. After our cruise, the liner was transferred to Orlando, in 2017 it was under repair, about which you can now read the information on the Internet. In the annotation to the liner on the sites it is now written that he makes 4-5 day cruises from Port Canaveral in Florida. The port is 45 miles from Orlando Airport.

And in 2019, the liner is going to be transferred to the Port of Galveston, which is considered the “home” port of the city of Houston, and is not very popular among cruise tourists because of its remoteness from airports, an expensive and not convenient way to get to this port.

In this connection, the liners so roam from port to port, I do not know. But the fact remains. And we at the Enchantment of the Seas in October 2016 embarked on our first 3-day cruise to the Bahamas.

Let's continue. For those who do not like to read, you can just watch the Video review of the cruise ship Enchantment of the Seas on the Internet. I looked, just like I was on a cruise again.

For those who still love to read, a little review in writing.

By the way, we lived on deck 2, this is a deck without portholes, below the waterline. And not at all regretted, honestly, there is such silence. No noise events on the liner, nor the sound of water overboard. All our time we spent on the upper deck, where there were swimming pools, restaurants, the sun and music, and only came to our room to sleep.

Therefore, I strongly advise those who want to relax in the cabin, but are afraid of how it will be without windows. Very good without windows, believe me. Comfortable and all inclusive for living.

All corridors in carpets and on all decks are the same.

Our room was without a window. Standard double. Everything is in the mirrors. Here it is. There are a lot of shelves and cabinets, everything is enough to lay out and arrange.

We had a toilet with a shower. Shelves were also enough, and we love it very much.

The list of everything that is on the cruise ship you will see when booking a hotel or cruise, usually a page opens.

A few more photos from this ship from the official cruise web.

The pools on the upper deck and the sunny 3 days that the Universe gave us on this cruise were worth nothing more, I will say so. Many other amenities begin to come in handy for longer cruises, and for 4 days nothing more is needed.

Vision class cruise liners are almost the same, sometimes on raids, like twins, if not the name and understanding of the pier for loading - unloading ashore, you can mix up where your liner is and where not yours. We have it either in Belize or in Honduras. That is, they are called some twin liners.

So, feel free to take cruises to liners of this class, they are very comfortable, with all amenities, but cheaper than larger 15-deck liners, where, in principle, everything is exactly the same, only the sizes are larger.

Some good insides photos take from official web and this web