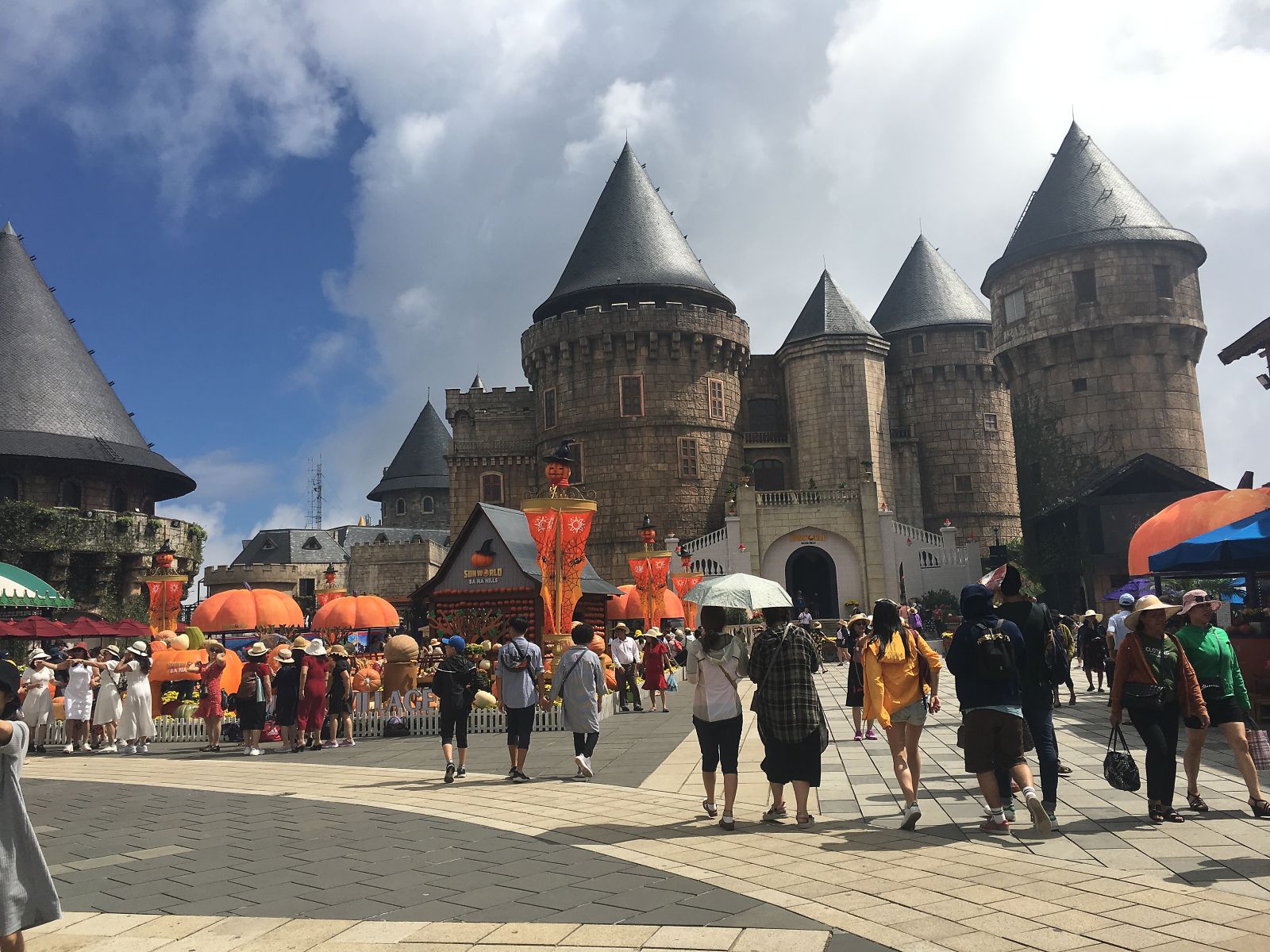 It's time to talk about the park itself. Because it turned out that this park is a unique place.

Let me remind those who have not read my previous articles that we initially went to see the Golden Bridge, which are held by the hands of God.

We checked the location of this bridge (I will write about it separately), looked at how much it will take in time and money in a taxi, read that you need to get to it by cable car, you also need to pay for it, then another entrance, then there more to eat ....

In general, there were two of us, we figured out, found out the cost of a day tour, and just took this day tour. 1100 Dongs. The tour included absolutely all expenses, including transfer.

At 8 a.m. they took us near the hotel. And at 18-00 we were dropped off near our hotel, that is, they returned us back from the excursion.

And that was really the best option. I highly recommend this kind of day trip to Ba Na Hills Park.

The fact that we find ourselves in an amusement park, we learned in fact, already in the park itself.

We had a group of 20 people that easily fit in a minibus.

Of the 20 people, 16 were Vietnamese (this is domestic tourism), and only 4 were foreign tourists. Therefore, our guide apologized, and said that since there are many more Vietnamese, she will conduct a tour and tell everything in Vietnamese (although she was originally supposed to be in English).

There was nothing wrong with that, anyway, I like to watch everything with my own eyes, and then read on the Internet.

But, perhaps, if I understood our guide while still on the bus, I would already know that we were going to a huge amusement park, and not just standing on a beautiful bridge.


So now, for those who read first and then travel, I am writing this post.

If you want to see the world-famous bridge lying on your hands, know that you need to go to an amusement park, because the bridge is located in the park, on the first level.

It's just that the park itself has existed for a long time. And the bridge was built only in 2018.

And, since the bridge is very beautiful and unusual, and has already thundered to the whole world, tourists are now going to look at the bridge, which adds and popularizes the park itself.

So, an amusement park.

It has an official name - Sun World Ba Na Hills.

It is located at an altitude of 1487 meters above sea level, and you can get to the park only by cable car, about which, it seems to me, you also need to write separately, it's worth it.

You need to come to the park in the morning for the whole day to walk around the park, get fun, and wait for the fog to disperse in order to see the bridge on the hands of God in all its glory.

If you decide to live there at least a day, then you can experience the uniqueness of this place in the mountains. During the day you will see spring (morning coolness), summer (when the sun shines during the day, and it gets quite hot), autumn (in the evening, after sunset the coolness sets in) and at night, when the temperature drops much, you can feel the winter cold.

For example, when we arrived at the top, we saw the park like this (or rather, we could not see anything because of the fog).

This photo I really like in the fog. This is a beautiful fountain with flowers, and here it is surrounded by clubs of fog.

And so on the cable car we drove into this fog.

Video in the fog can be seen too.

The fog was thick, and I was anxiously thinking that what could I see here if the fog would be like that? But half an hour later the fog cleared.

All the buildings became clearly visible, beautiful buildings, the spirit of old France is felt, everything is beautiful, decorated and well-groomed.

On the Internet, I came across a comparison, it is often called Ba Na Hills Amusement Park Vietnam Disneyland.

It seems to me that this is not entirely true. At least, and, I would say, the fundamental difference is the size.

Sorry, so many amusement parks and attractions in many cities in China have a 2-day entry ticket only because it is simply impossible to see the whole park in one day.

It’s easy to see the park in Vietnam in 1-2 hours, and whether or not to have fun there on the rides is your choice.

Therefore, I can not compare this park with Disneyland. I think that this comparison is just a kind of advertisement for tourists.

But you can already compare with Universal Studio Singapore Park.

They also compare it to Vinpearl Island Hotels inNhaTrang, but I haven’t been there, so I can’t say anything.

There are a lot of hotels and restaurants in the park for every taste. You can just come and live there as in a resort.

By the way, once in this place there was a resort for the French aristocracy.

In 1920, the French built a resort here, where 200 luxurious villas, restaurants, and chic hotels rose. Everything for the rest of the French elite. Then there was no cable car, and had to climb the mountain on foot.

During the Vietnam War, this French luxury resort was almost completely destroyed by bombing.

Now there are wonderful hotels, restaurants, and new venues are located everywhere, attractions are being built. I think in a few years there will be even more entertainment, hotels and restaurants.

Here are two roads - Rodelban. The queue for one and the other.

In the photo, the roadblock is right in the distance, and on the second right below us, we are standing just on the observation deck above the line for another roadblock.

The video can be viewed in more detail.

I must say, the flow of tourists there is simply unrealistic, I did not come across information about how many tourists go there per day, but judging by the number of tourists climbing the cable way above, there are thousands or tens of thousands of them daily.

This is how the tourism business expands in the country.

And the city is being built with money from the tourist flow. And it is built at every step ....

Video with a stream of tourists to land.

I advise everyone to visit the park.

All photos are copyright.