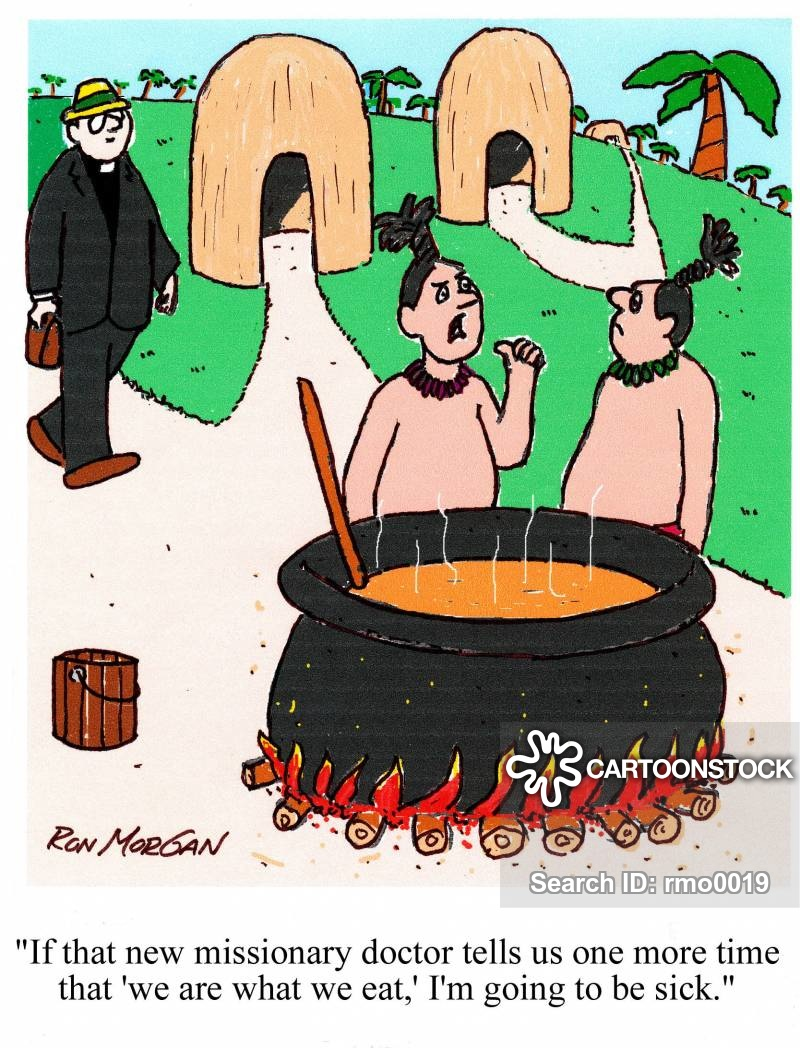 Salsbury and the many missionaries before him knew that all of this - the powerhouse, the gardens, the growing fields, the barn, the hospital - were all part of the show, a not very subtle attempt to convince them of the benefits of embracing the new religion.
Unlike all the many missionaries before him, Salsbury did not belong to any church and the only god he believed in was the one that looked back at him in the mirror. He did look like a god among the natives, as he was an exceptionally tall man, whereas the local tribe was one of pygmies, hardly taller than normal midgets. The locals looked up to him, literally, if not metaphorically.
There was a very good reason his predecessors had all failed to convert the pygmies - the tribesmen were impervious to words of wisdom, sermons, prayers or threats of eternal damnation, basically the standard arsenal of any self-respecting missionary. It wasn’t that they rejected the new religion, on the contrary, they were in the habit of nodding assent to whatever the white man said. Not that they were stupid or anything, actually they were rather quick at learning how to operate the new tools the missionaries brought, they just did not care.

The last true missionary was a Catholic, Father Quilby, a sensible man and quite good with words, who suffered a nervous breakdown after two years on the island. Poor Father Quilby was infected with a rather vivacious streak of enthusiasm, which led him to entertain very high hopes as to the success of his mission. It took a stupid argument between two locals, which resulted in a vicious fight and the subsequent death of one of them, for the priest to understand how things really stood. The murderer saw his actions as entirely justified and so did most of the community. It was not Father Quilby’s place to deliver justice, that was the privilege of the tribe chieftain, but the priest pleaded with the man to confess and seek absolution for his terrible sin, justified or not. Or else, he was bound to go to Hell. Only then did he realize the tribe couldn’t care less about eternal damnation, the pits of Hell or even God’s retribution. The way they saw it, going to Church and taking communion were just part of the show, something they did to keep the peace and the missionary happy. Father Quilby had to be sent to a care home and God only knows if he’ll ever recover from this shock.

George Salsbury paid 100 gold coins to the church to be put in charge of the mission, taking a solemn oath to bring the infidel on the path of righteousness. Whatever, a deeply skeptical Archbishop replied and pocketed the money, happy to recover some of the costs the mission had incurred over the years. As for the souls of the pygmies, he’d given up on those after listening to Quibly’s rambling account of the events.

"Dough Friday" I used to call him teasingly, since our “marital visits" began usually that day when us women started baking the pies for the Good Lord’s day', the woman explained, a look of anguish in her eyes. The young man’s name was Owjimo, which one of the unfortunate missionaries before him had put in as James in the church registry.
The problem was this James or Owjimo or whatever was gone. George Salsbury believed he knew exactly the reason for this sudden disappearance. The young man and the woman in front of him, Falla, were not legally married and, as such, had no right to ‘marital visits’.
It wasn’t a matter of faith for George Salsbury, for he had little, but he had come to the conclusion that all his predecessors had failed because the threats they used were too distant and sort of vague. Even the most vivid description of Hell was no match to the draconian laws the new man in charge imposed on the pygmies. Take for instance this ‘marital visit’ transgression - instead of condemning the sinners to the fires of Hell, Salsbury had decreed the guilty parties would be publicly flogged. And condemned to Hell, of course, but he found the natives to be more impressed by all the blood and the cries of pain.

With young James missing, the woman could not be punished either, as the regulations required full public confession by both guilty parties. Falla could not have sinned by herself, now could she?
As the pygmies were used to all sorts of weird church regulations, Salsbury brought to their attention there were far too many days in the calendar when conjugal activities were not allowed and even the most pious of men could unwittingly commit a sin, which was why he decided people would live separately, men on the eastern part of town and the womenfolk on the western shore of the river that divided the settlement. Obviously, the real reason behind the whole marital visits scheme was productivity, especially as those who displeased him could be denied the right to lie with their spouse. Kept them in line and on their tows.
George Salsbury found the matter most irritating as the pygmies were supposed to start picking the mangoes come Monday morning. The boat was expected to take the fruit to the continent in a week’s time and he badly needed the money as the mission house was in a state of woeful disrepair and it took forever to warm enough water for his nightly bath, which was a must in that hot climate.
He’ll have to summon Chief Wazul and impress upon him the need for the culprit to be brought to justice. He had to be somewhere, it wasn’t that big of an island anyway. 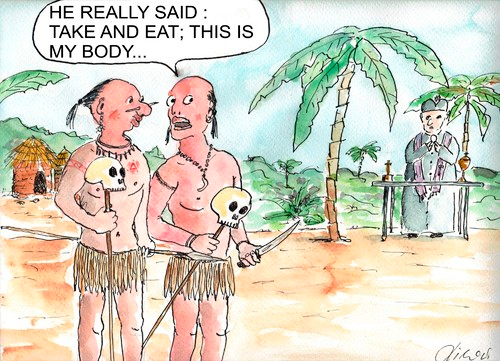 ‘Do you even understand how selfish you are? How can you talk so lightly about young people and hot blood when their immortal souls are at risk?’
George Salsbury was shouting and he was painfully aware his face turned crimson when he lost his temper. Chief Wazul instead was perfectly calm.
‘I reckon his backside was more at risk under the circumstances’, he offered, as if the new missionary failed to see the obvious.
Salsbury was seething by now so he went on to explain to the tribal chief the many benefits to his community the new laws had brought. Like that problem last spring when five young boys got intoxicated on stolen liquor. A good flogging and there were no more raids on the cellar, where they stored wine for special holidays - another of Salsbury's genius ideas, as the pygmies were quite partial to alcohol, which led to domestic quarrels, black eyes, foul moods and a lot of sulking, which would not do, particularly at harvest time.

Chief Wazul nodded whenever the missionary pointed out another of the good changes his firm rule had brought. If all went well they could afford to bring in a nun to teach the children to read and write as the last one had left with Father Quilby. Once again, the pygmy nodded grateful.
‘All you have to do is find this damned James, so we can have the matter resolved by Monday.’
Chief Wazul cleared his voice.
‘See, your lordship… the matter has already been resolved by our elders, the boy will marry the girl after the harvest and his father will pay two goats to the bride’s family. All clear.’
George Salsbury felt a vein in his neck throbbing painfully and had to loosen his collar. The impudence of this man! True, he was the one to impart justice, but…
‘But I thought we agreed the new laws bring peace and quiet to the community. Things are much better now, no quarrels, no problems. If we don’t make an example of these two what’s going to happen? Do you want to go back to the old ways?’
‘Oh, Lord, no, we’re good like this. Life’s so much better without the wives nagging every day and night. We’re free to spend the evenings telling jokes and having a drink or two…’
‘What?! You drink every night? But the cellar? And those kids stealing wine, you agreed it was a sin, didn’t you?’
‘We don’t touch the wine in the cellar, sir. We have our own supply and those rascals had been stealing from us, too… They needed a lesson, I reckon’
Salsbury’s face went livid.
‘What next? If we don’t punish those two what’s going to become of the morals in this community?’
‘Stealing a girl has never been a problem, that’s how it’s always been. And if you’re worried about them marital visits, don’t worry, we intend to keep them like this. Conjugal life is much better now that the women have to wait for a week. They’re on fire on Friday nights, if you know what I mean… I’m sorry, you wouldn’t know, would you?’
The missionary was speechless, but the pygmy chief took no notice and went on…
‘And, I’m sure you’re aware that river is not that deep, although the water’s a bit cold at night… no, everything’s fine as it is…’
He was beaten, but since the business went just fine the missionary decided he won’t push matters further. To Hell with the lot of them, for all he cared.

‘I’ll trust in your good judgment, Chief Wazul. Just have the people ready to start picking the fruit.’
‘About that, sir… I’ve been meaning to tell you we were thinking we could use the money to buy one of those moving pictures machines. That would make for a fine Saturday night entertainment…’

Luckily, George Salsbury could arrange passage on the boat that carried the mangoes to the continent. For the next three years, the mission house stood empty until one fine spring day a new priest came to the island.

Thanks for reading - if you've managed so far

And special thanks to the wonderful @mariannewest for today's prompts. I haven't been doing a freewrite in a long time and I needed a break from ... the real world!
(Prompts are in bold, by the way.)

Your story has a lot of reality, I loved it. Receive my affections @ladyrebecca.