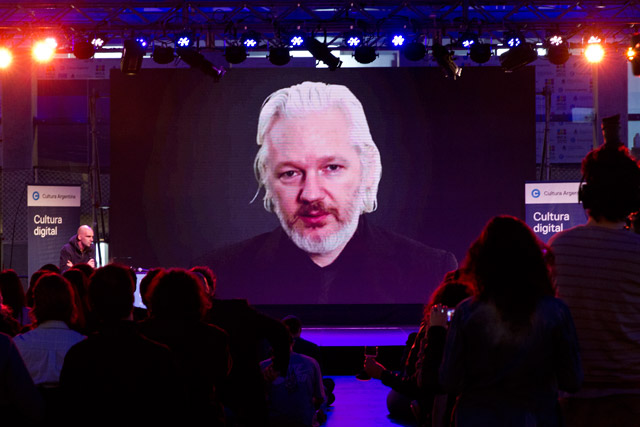 Julian Assange is still locked up tight in Belmarsh prison in the UK, serving 50 weeks for breach of bail terms in 2012. He is locked up tight in the medical ward for 22-23 hours each day. He is only allowed two 2-hour visits per month. He can't use a computer.

All of this adds up to punitive measures against Assange being able to speak to his lawyers and defend himself properly for the trumped up charges of violating the 1917 US Espionage Act. Assange is the first journalist ever to be charged under this antiquated "law".

The UK courts have decided to hand over Assange to the US, without allowing Assange the opportunity to make his case to the UK. The UK courts are bowing to the American empire and their lust to hang someone who exposed much of their wrong doings.

Back when Assange was arrested in February, a Spanish company was caught trying to extort and blackmail money from WikiLeaks. What did they have? Video, audio and documents from Assange's time at the Ecuadorian embassy.

It turns out that this company, Undercover Global, was spying on Assange on behalf of the CIA.

CEO David Morales handed over audio and video, and had "technicians install an external streaming access point in the same area so that all of the recordings could be accessed instantly by the United States", according to a report by Spanish newspaper El Pais.

The goal was to eventually get Assange pushed out of the embassy. And the CIA succeeded. Bugging the embassy and monitoring Assange led to his further isolation and to the eventual cancellation of his asylum status under false justifications of breaching draconian terms later imposed.

To read more about the witch hunt on Assange by the CIA as a result of leaks provided to WikiLeaks, check out the details in The CIA’s War On WikiLeaks Founder Julian Assange by Kevin Gosztola.

Why people are overreacting as if this was not expected all along, and for sure Assange himself knew that, the British knew it, and also the Ecuadorians under their new US stooge president knew it, if not they're the ones who offered to help the CIA..

In our last Algorithmic Curation Round, consisting of 95 contributions, your post is ranked at #3. Congratulations!

Did you think the CIA gets all the billions for doing nothing? They bug each and everybody, unless he is to smart to let it happen. And even there they at least try.
Hell, they even bugged the phone of the german chancellor Merkel!