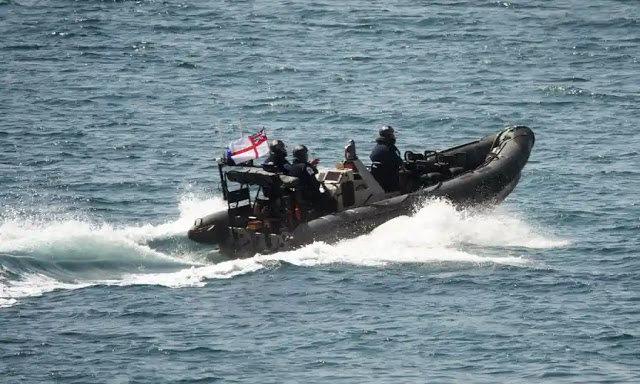 Hijacking the ships of others countries is a big nono, except when done by Western powers, it seems. In efforts to pressure Iran to do what the West wants, an Iranian oil tanker has been "proudly" highjacked the imperial forces of Britain.

If anyone would hijack a U.S., British or other Western nation's tanker with oil destined for another country, you can be sure this would be called an war provocation. Yet, the British have done this, and think it's a "right-action" for global peace and stability. How things change when the shoe is on the other foot...

Without evidence of Iranian involvement in the tanker attacks of last month, the West keeps ratcheting up the pressure on Iran. These attacks were likely staged by the West and used to incite a narrative against Iran in the world stage or theatre as we may call it.

The U.S. then had drones spying over Iran, and one was show down, which resulting in an order to attack Iran which was later called off. A spy drone gets shot down, and this almost causes war. Note that it's a spy drone, so obviously it's fair game to take down a spy plane that's spying on you. I don't know, but I think spying is looked at as a negative when another country does it to you.

Then the Brits announced they were sending the British Royal Marines to "protect" their ships. It turns out that was a cover to just sent the military to go seize ships from Iran. The Guardian reports:

Royal Marines have helped seize an Iranian supertanker suspected of carrying oil to Syria off the coast of Gibraltar, escalating tensions between the UK and Tehran as the agreement aimed at halting Iran’s nuclear programme unravels.

A detachment of nearly 30 British troops working with the Gibraltarian police intercepted the vessel, believed to be carrying 2m barrels of oil, in a dramatic manoeuvre Spain said had been conducted at the request of the US.

What we have are illegal sanctions which are being enforced by illegal stealing of ships. Iran isn't being allowed to sell it's oil to those who want to buy it. The West is legitimizing theft. But that's nothing new really, now is it?

Central authorities, Iran included, all support theft, as long as they are the ones doing the stealing. Most people don't see it, or when it's pointed out to them, they don't care, ignore it, or excuse it as "needed", such as with taxes.

The wold stage is indeed a stage, a show, a theatre. We are all the audience and participants who go around in circles trading places. We go around in circles chasing the distractions the mainstream media and government wants us to focus on. Meanwhile, the core values are disintegrating around us bit by bit, gradually, hardly perceptible to most.

Thank you for your time and attention. Peace.

If you appreciate and value the content, please consider: Upvoting, Sharing or Reblogging below.

I’m not even sure what to say besides this is insane. lol it even got mainstream coverage and nobody even blinks. I wouldn’t have even known... Except I definitely keep hearing things like “Iran violated sanctions”.

Why does everyone keep bowing to the US? Why does Spain care?

FYI... I gave a string of UPVOTES that appeared to DECREASE your rewards. I've seen this before. I tried removing the upvote from those posts that went down and it didn't restore them to previous reward levels (which were sometimes more than a dollar higher than before I upvoted them.)

Adding the upvote back seemed to add the appropriate $.02, but not the "ripped off" amounts.

I've seen this before.

Do you think it's a display/programming issue, or hacking?

Your post was upvoted by @steem-ua, new Steem dApp, using UserAuthority for algorithmic post curation!
Your UA account score is currently 7.296 which ranks you at #69 across all Steem accounts.
Your rank has not changed in the last three days.

In our last Algorithmic Curation Round, consisting of 159 contributions, your post is ranked at #23.

@krnel is part of the gang stalking group @steemspeak ran by @fyrstikken, that uses Voice to Skull. This comment is here to let people know.

This is not a warning, it's a fact. Voice to skull will read your thoughts first without your knowledge for a long time, to map you. They then include transmitting self octave scale-able comments into your head to a tight, pulsed pace, indefinitely. Any brain activity, even the smallest, will trigger this when sound is turned on. You have to do all of your thinking around this. It is extreme torture, done by monsters.