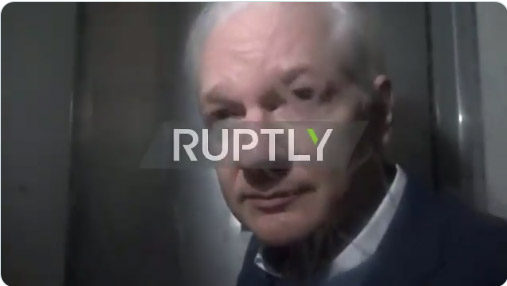 Assange appeared in court yesterday, visibly showing signs of mental deterioration due to psychotropic torture at the Belmarsh prison medical ward, as he struggled to give his name and date of birth when asked.

Human rights activist, historian and former British Ambassador Craig Murray wrote about Assange's poor condition as he was in court to witness the appearance and travesty of justice.

"Everybody in that court yesterday saw that one of the greatest journalists and most important dissidents of our times is being tortured to death by the state, before our eyes."

The state doesn't care about your rights though. It's not a real person. But those who work for the state should feel morally obligated to uphold rights, yet they don't in many cases. We have a world famous journalist and exposure of dark truths that states sought to keep secret, and he is being drugged to death. Assange is being drugged and prevented from thinking, thereby prevented from even being able to mount a defense.

Murray was previously skeptical about claims of Assange being tortured -- until now. But that doubt has changed to certainty, as he agrees with Nils Melzer, the UN Special Rapporteur on Torture about his psychological state and other claims of being the subject of debilitating drug treatments.

Murray has seen the effects of extreme torture in Uzbekistan and trauma of those in Sierra Leone. Murray says Assange "Julian exhibited exactly the symptoms of a torture victim brought blinking into the light, particularly in terms of disorientation, confusion, and the real struggle to assert free will through the fog of learned helplessness."

Assange lawyer spoke to Murray, and said he is worried Assange won't make it to the end of his extradition process. Murray further describes the state thugs as eager to participate in this "bloodsport" against Assange.

"To see my friend, the most articulate man, the fastest thinker, I have ever known, reduced to that shambling and incoherent wreck, was unbearable. Yet the agents of the state, particularly the callous magistrate Vanessa Baraitser, were not just prepared but eager to be a part of this bloodsport. She actually told him that if he were incapable of following proceedings, then his lawyers could explain what had happened to him later. The question of why a man who, by the very charges against him, was acknowledged to be highly intelligent and competent, had been reduced by the state to somebody incapable of following court proceedings, gave her not a millisecond of concern."

The powers and lies of the state and mainstream media have created an environment where authority is lavished and praised while they can do crimes abroad and at home. In the case of Assange, he is being slowly killed for everyone to look at, and the majority hardly bat an eye. Some cheer it on.

The world is falling upon darker and darker times, as the masses get distracted by Hegelian dialectics and controlled choices in politics of the left vs. right. Governments grow in unchallenged power as they attack other countries, and impose greater authoritarian control within their own borders. The surveillance state grows, and the war machine marches on. I suspect only greater chaos will have more people finally wake up to the dark reality, but by then many will be even more entrenched and mind controlled to be less able to see or less willing to resist it all.

This is fucked up... And as you say, dark times are coming. In Chile we are at the border of a new dictatorship with the military out on the streets and several dead people to date. What game are governments playing?

It's really sad how many freedoms are slowly getting eroded and there is very little that can be done.

This is nothing new - it is the status quo. Governments, controlled by the oligarchs and plutocrats, the dictators and autocrats, multinats and giant corporations, and the military, have long been subverted by special interests.

Giant banks can't be meaningfully sued because they're "too large to fail". Big Sugar in Florida is so powerful that a call to Clinton stopped Gore and other's efforts to save the Everglade, and then with the Everglades experiencing mass die-offs over the past 4 years, they got an extension of their lease despite serious opposition because they control the water commission that makes the decisions. Numerous multinats engage in shady tactics, slave and near-slave labor practices, bald-faced lies in the face of government investigations that exposed the bad things they've done but then get swept under the rug.

The free market is just a fairy tale, just like socialism, communism and any number of other -isms that can't survive in the shadow of human nature without becoming corrupted mutants. Whistle-blowers are often treated as criminals because they expose the truth. Politicians make themselves richer through the connections they create and, in the US, presidents are not only given a lifetime salary, they are also given a Secret Service detail to protect them. It's all a shell game and we are the fools who are too blind to see that there is only one shell...and no ball.

In our last Algorithmic Curation Round, consisting of 99 contributions, your post is ranked at #2. Congratulations!

some of the news stations out there actually try to vilify him also and although i don't know anyone personally that buys into the idea that Julian was endangering national security, i would imagine that there are a large group of people who believe in government so massively that they will join in the chant.