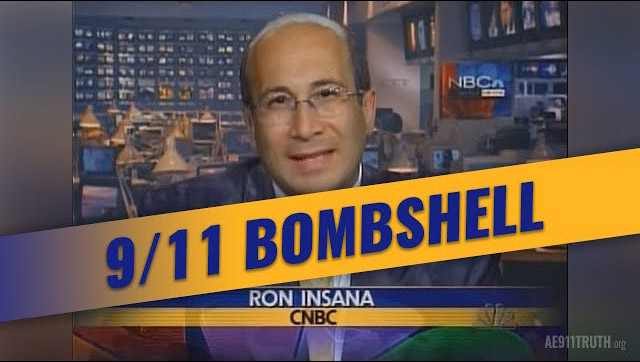 Another revealing admissions by an CNBC anchor came on the the 18th anniversary of 9/11. While sharing his experience on New York’s 77 WABC Radio, former anchor Ron Insana said WTC7 was taken down with a controlled implosion.

"Well, remember 7 World Trade had not yet come down. And so when I went down to the [New York Stock] Exchange that Wednesday morning [September 12], I was standing with some military and police officers, and we were looking over in that direction. And if it had come down in the way in which it was tilting, it would have wiped out everything from where it stood to Trinity Church to the Exchange to, effectively, you know, the mouth of the Hudson. And so there were still fears that if that building had fallen sideways, you were going to wipe out a good part of Lower Manhattan. So they did manage for one to take that down in a controlled implosion later on. And the Exchange was up and running the following Monday."

This is what Larry Silverstein said about WTC7. BBC reported it's destruction on the 9/11 about 20 minutes before it happened. Anyone looking at the video can see it was a controlled demolition. Well, nearly anyone who can see things clearly and not cloud reality with their conditioning and indoctrination.

I don't know what it will take for people to accept the reality before their eyes. Oh right, they need the government to tell them what reality is. I guess they will stay asleep forever if that's the case.

Slaves are bred to believe.

Everyone is conditioned.
The outliers are just that: outliers.

And i dont believe globe earth as well..

It is important to you and I that justice be served and folks held accountable. Yet with the passage of time, people forget and let it go. Perhaps the powers that be also knew that in their planning. Thanks @krnel.

Yes you can get away with mass murder and blame someone else.

How long does it take to wire up a building with explosives in order to bring it down safely, like they did with WTC7?

Is that something you can do in 8 hours, in a burning building, with major chaos all around you?

How is it possible to even transport those explosives across town at a time like 9-11?

Anyone want to try and answer those?

Edit: I forgot to add.. This decision would have to be made and executed within 8 hours.

Did you know the event was known to foreign and domestic agencies? Yet they didn't plan against the attack despite it being known. Whether it was local or foreign agencies who conspired to make it happen, it was allowed to happen locally. It was planned, and see the evidence for Israeli demo setup in weeks before the planned event.

In the past when I researched this it was theorized by some they used cables to "pull" it down, so that wouldn't take nearly as long. There's a demolition expert on YouTube who IIRC claimed something like this could be done and wired with explosives in a day or less, and in my own personal opinion I'm openminded that it could have been prewired for various reasons since it was such a sensitive building, however what the truth is I dunno.

In our last Algorithmic Curation Round, consisting of 113 contributions, your post is ranked at #10.

If they were legitimately trying to avoid further destruction and damage and that's all it was, why wouldn't they just tell us that from the beginning? Why cover it up for so long to the point so many people thought it was a result of the fires associated with the "attacks"?

That's just too weird and makes one like myself think something else was going on and that makes me suspicious. It's almost like they can't deny it was assisted at this point anymore and now are trying to retroactively come up with an excuse. Bizarre!

I wonder what the debunkers who religiously and fanatically toe the line of the official story have to say about this one...

Interesting info, thanks for sharing krnel!

They still stick to the excuses: "how could they set up explosives in a few hours after the attack", failing to understand a plan has things done ahead of time. The visual evidence speaks for itself...