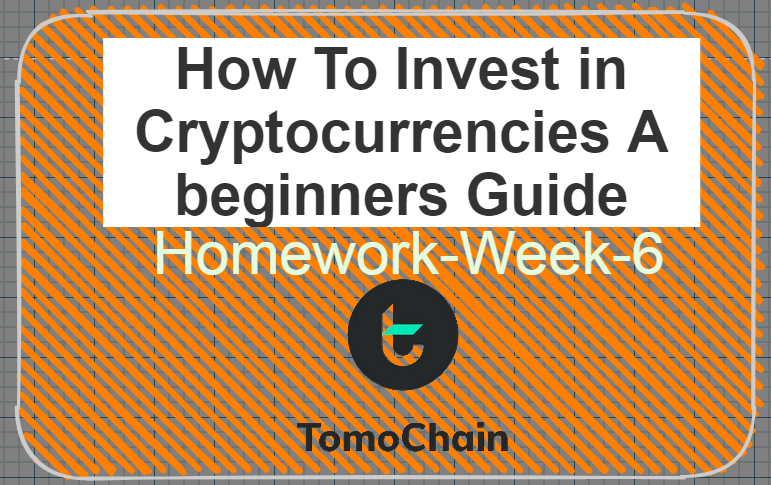 In this article, as part of the homework given by the great professor @besticofinder in the sixth week, will discover TOMOchain project which is considered to be a revolution in terms of the number of transactions per second. Good reading!.

Below you will find some main information regarding the TOMO token including using the Coinmarketcap platform.

TomoChain is a blockchain that wants to solve the scalability issues faced by other blockchains, like Ethereum , the most widely used blockchain for smart contracts and DApps (decentralized applications), its network only allows 30 transactions per second. This figure is ridiculously low and has caused concerns in the past: network congestion and exorbitant transaction costs.

To solve this problem, TomoChain has already tested it by performing over 2,000 transactions per second using a new transaction verification system called Proof of Stake Voting (PoSV).

The project team have a great desire to achieve a set of ambitions so that TOMO could become one of the most interesting blockchains in the market.

Here are some goals TomoChain would like to achieve:

Now let's take a closer look at how TomoChain works.

How does TomoChain work?

As already explained previously, TomoChain wants to revolutionize the world of blockchain by offering a solution that would solve all current problems. To do so, the project revolves around several objectives that we will explain point by point.

The two most widely used consensus currently are PoW (Poof of Work) and PoS (Proof of Stake). PoW secures transactions slowly and consumes a lot of power. On the other hand, PoS has a weakness in the security level but it provides similar guarantees with negligible transmission costs. For this the TomoChain network has directed towards the use of a hybrid system called PoSV (Proof of Stake Voting).

There are many similarities between PoSV and other consensuses such as EOS's Delegated Proof of Stake (DPoS). This hybrid system from TOMO uses double validation to perform several tasks such as creation, verification and voting for blocks. This operation combined with a random selection mechanism to reduce the possibilities of obtaining invalid blocks on the blockchain.

In order to avoid any risk of forking, when several blocks are in competition, the one with the longest chain will be chosen, as happens in PoW systems.

The masternodes have a role of creating the blocks and which are rewarded afterwards using TOMO tokens. In order to be able to create a masternode, you must meet the following conditions:

In order to avoid handshake attacks (when the creator of the block and the one responsible for verifying it decide to validate a fraudulent block), the person responsible for verifying the block is chosen randomly from among the 149 other masternodes. Before validating the block, another person is chosen from among the 148 other masternodes in order to confirm the validation of the block. If the block is not valid, a new one is created instead.

When a person decides to vote for a masternode, they do so by sending TOMOs via smart contract. The more TOMO that person sends, the more rewards they will receive when a block is validated.

In order to check that the masternodes are working correctly, 3 criteria are taken into account:

If TOMO holders are not happy with the work of a masternode, they can withdraw their vote and vote for another masternode. This way, it is ensured that only the best masternodes will remain active.

Every 900 blocks (either 1800 seconds or 30 minutes - also called epoch), a "checkpoint" block will be created in order to distribute the rewards. Signatures of transaction validation are counted from the previous epoch and the rewards are prorated to the signatures as follows:

TomoChain decided that its programming language would be Solidity. This is the exact same language that Ethereum uses. Therefore, ETH smart contracts and ETH Dapps will be compatible with TOMO. Atomics swaps are also planned between these two cryptos.

But TomoChain doesn't want to stop there. The purpose of the project is to allow the various existing blockchains to communicate with each other. This is called interoperability. However, it will take some work to make projects using a different programming language compatible. But this is expected in the more or less near future.

Because of its volume of transactions per second which is significantly higher than the competition, the TomoChain network is ideal for the use of decentralized applications.

The big problem with dApps today is that they mainly use the Ethereum blockchain to operate. As this blockchain is currently limited to around thirty transactions per second, the performance of these decentralized applications is limited.

TOMO's vocation is to authorize more transactions per second than VISA term. If these goals are indeed achieved, then TOMO could become the number 1 blockchain for the use of dApps.

The TomoChain development team is pretty impressive and doesn't have to be ashamed of the competition. Let's take a look at some of members and their background:

This Tomochain Is very new to me and I had no idea about it and after your post I have got some good idea and I should try this out. thank you very much for your guideline through homework submission

Thanks for your coming!