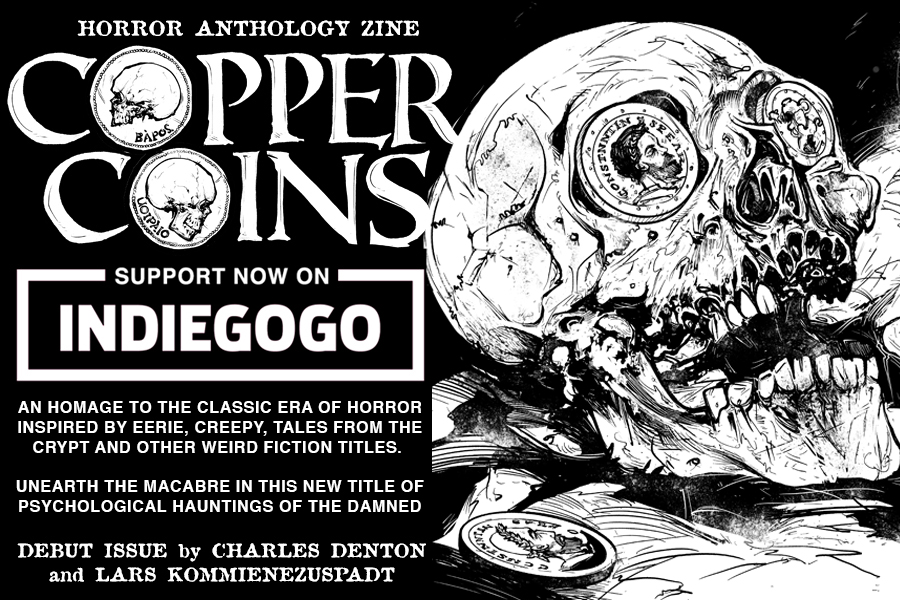 Hey, Steemit! I just arrived at @caffetto. I had to take a pass on blogging last night. I had a shoot that didn’t start until 9:00p.m. Minnesota, and much of the midwest got blasted with an overnight blizzard. I came home, dropped my camera bag, ate and was ready for bed. One thing I did manage to do before calling it a night was launch my @coppercoins IndieGoGo campaign. @ghostfish and I have been working on this for over a year and a half, and as Steemians, many of my followers have seen this project evolve month to month. It’s finally here!

So, this post is to officially announce the campaign and give some backstory on the comic, how we came up with it and what we’re hoping to do with future issues. Firstly, you can visit, read about and support this project at our IndieGoGo Copper Coins horror anthology page! We’re doing a 30 day, all or nothing campaign. If we don’t reach our goal, we won’t receive any of the funding. Do you remember Tales From The Crypt or Creepshow? @coppercoins is an homage to that era of horror and the genre created in the 1950’s and 1960’s.

As a horror anthology, it will be a series of psychological hauntings, narrated by Charon, the Ferryman of The River Styx. The first story takes place in the lesser known, but far more atrocious Third Battle of Ypres in World War I; Passchendaele. A German infantryman, stuck deep in the mud at the bottom of a mortar shell hole. Impulsively, he shoots an Australian soldier that peers over the edge and the body slides down the incline. As days pass and madness sets in, Otto begins a conversation with his recently deceased company, Ira.

@ghostfish and I have four more stories on deck, but this initial story was developed and drawn over the course of a year and half. Money is the biggest obstacle as we grind at our day jobs, only making time to get together once a week. The blockchain world might not be the place to shill a centralized crowdfunding platform, but much of what we’re trying to raise money for is printing and materials. What’s left, @ghostfish and I are splitting evenly and being paid for “work” already done, I’m happy to just buy STEEM at $0.10.

That’s the summary for @coppercoins. There’s a lot more to say but I think, for now, this’ll set the table. Thanks for keeping us in mind while shifting in to hyper-capitalist gear for the holidays. This project is deeply personal to both of us. Resteem and share if you feel so inclined. We’re hoping this is the start of a new path for both of us. Enjoy the work and thanks for supporting us both as creators here on the blockchain. For more comics, illustration, photography and the stories behind the art, follow here @kommienezuspadt.

Wow! Congratz! Checking this out after I wake up again :D (Good night.)

Very exciting! Best of luck with this @kommienezuspadt!

Thanks, @ericvancewalton! This one has been cooking in the pot for a long time. @ghostfish and I have really invested a lot of time and creativity. Appreciate it, friend!

It would be cool to see a little “shared universe” elements interwoven in the stories. Have you considered adding a subtle plot to the background among all the stories? Or will each tale be completely independent of the others?

The reoccurring theme through all of them, @nateagulia, is that it's all psychological hauntings in a very Poe-esk way. Also, we talked about the passenger Charon is ferrying across the River Styx would always be the recently deceased of the previous story.

Hi Lars, it is great to be able to enjoy your work every day. What a beautiful horror comic painting. But it also looks terrible. Your comic picture looks alive. even though it's just a pen. You are truly a multi-talented, sir. Have a nice day.

You need fiat money to pay for the print, so I think it is fine doing it on Indiegogo. This place is also a simple social media where we should share non crypto projects. I'll reshare and buy a copy immediately.

Say hallo to @ghostfish. I am missing his macabre stories. Made this drawing for one of them.

WHOA! I just saw your artwork based on @ghostfish's writings! Has he seen this?! I'm going to message him about it now. He tends to go in and out of his use on Steemit, so he may have missed it. That's amazing! Thanks for the token, @katharsisdrill!

I think we wrote a bit about it back then.

And you also better have a deranged coin!

You just received DERANGED @kommienezuspadt Keep up the great work, view all your tokens at steem-engine.com

Looks great. I'll be checking this out. We really need decent ways to croudfund with Steem. I hope that will come in time

Thanks so much, @steevc! It'll be worth it, and I'll be sure that if it reaches funding, I'll personalize it with some STEEM reference. I'm pretty excited. @ghostfish and I have poured a lot in to this project and the stories. I appreciate the support very much!