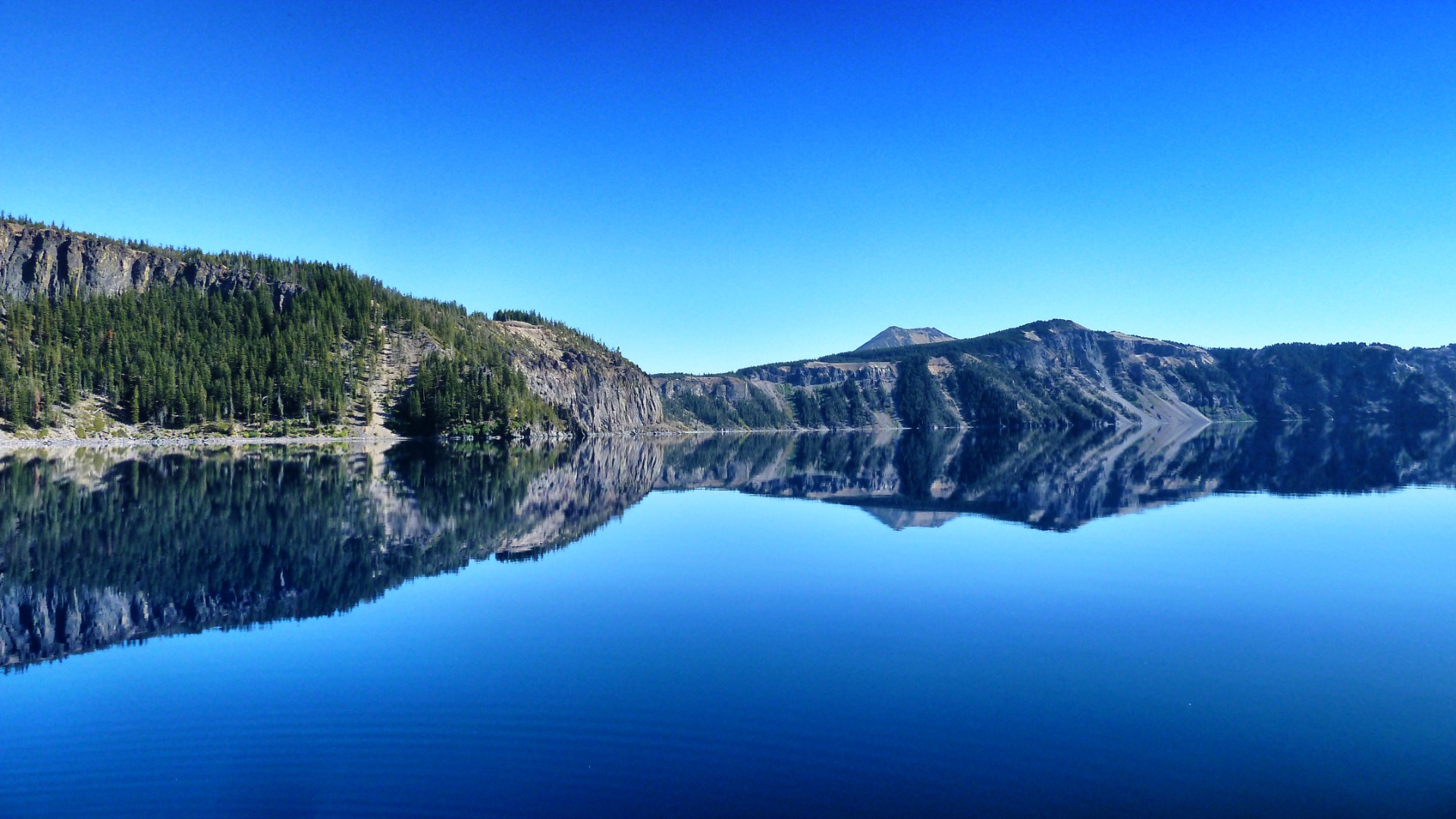 When the moment is coming you’re standing on the edge of the cliff and you’re looking down in the bluest blue you have ever seen in your life. It’s is bluer than blue, a blue so deep and clear that it is blowing your mind away. Breathtaking blue. Unbelievable blue. Blue so blue, like blood is red. Words cannot describe the feeling you have when you’re standing at the shore of Crater Lake and you have the chance to see how different this lake s from all other lakes around the world. Here where million of years ago the Mount Mazama volcano destroyed all life and beings now a nature paradise waits for you with the bluest blue of the world: Because the blue parts of the sunlight are reflected from the water while the other colors are absorbed, this lake is the bluest one of all blue lakes on earth.

It’s not California anymore when you come from the south, its southern Oregon instead where this happens. The Pacific Crest Trail runs along the shore of Crater Lake, the central object of the Crater Lake National Park. This lake characterized by this unusually deep blue color I tried to bring to your inner eyes at the beginning. The lake has a simple history: At first there was the volcano. At the second: Rain filled the caldera with water. There is no source or something else. At the third are a lot of questions: Is the water always the same? Is there life on this Mars with a size of 17.46 km, 1.883 meters above sea level?

Yes, it is. Salmons and Rainbow trout are living in the clear water – and before you ask yourself how they can been born in a sea high in the mountains: No, it wasn’t bird with spawn on her legs who brought the fishes to the lake. The wonder is manmade: The lake did not have an original fish population for ages, but various fish were exposed here between 1888 to 1941 to try to locate them. But only a subspecies of sockeye salmon (kokanee salmon) and the rainbow trout were able to establish themselves.

The failure was not the fault of the water thats exchanges about every 250 years. The existing water vaporized, new rain and snow melt water brings replacement. Nevertheless Crater Lake is poor in living things and free of algae. And that’s the reason why it is blue like no other thing on this earth. This lake is the ol’ blue eyes of the world, it#s just rainwater, but it has the the best quality in all of North America. Standing on the shore only gives you a small impression, but in 1972 experts measured a viewing depth of 43.9 meters under water.

Today the park administration attaches great importance to maintaining this water quality. Motor boats who are willing to operate on the lake must have a closed fuel system so that no oil traces get into the water. The greatest boat on the sea don’t do this: “Phantom Ship Island” is a fata morgana like it is coming from “Pirates of the Caribean” – an island in the middle of the place where 7.700 years ago the volcano erupted and a supermassive eruption spits out lava and other material in a 150 kilometer radius. As a result the volcano's cathedral collapsed and formed the caldera you see today. It could be happen again, experts say. The hydrothermal activity at the bottom of the lake is an indication of a possible eruption of the volcano.

On the side of Phantom Ship Island you can see Wizard Island, another isle in the blue. Wizard Island has a height of 230 m at medium water level and an area of ​​1.278 km². Wizard Island is a small an inactive volcano for itself, that dates back to around 4600 BC. Chr. Probably invisible for you will be another wonder of this place: The “Old Man of the Lake”, a centuries-old tree trunk, thats float upright in the water on the lake since at least the 19th century.

More travel stories under the pictures.

Los Angeles: The City of Angels where the devil has his home

Salvation Mountain: The man who made a hill for god

Anza Borrego Desert: Meet the monsters made of steel

Area 66: The last secret of the aliens

Ghost Town Oatman: Where the mule does rule

Route 66: On the road that kicks

Grand Canyon: Scenic views into the abyss of earth

Graveyard of giants: The Jurassic Park at the Navajo Trail

More than monumental: The heart of the wild west

Death Valley: The dry throat of the desert

Sequoia: Beyond the everlasting trees

High Sierra: The wonder of the Sierra Waves

Alcatraz: Into the home of horror

Richfield: Where Easy Rider is alive

Congratulations @koenau! Your post made the TravelFeed team happy so we have sent you our big smile. Keep up the good job. 😃

Hiya, @LivingUKTaiwan here, just swinging by to let you know that this post made into our Honorable Mentions in [Daily Travel Digest #743](https://goldvoice.club/steem/@steemitworldmap/travel-digest-743).