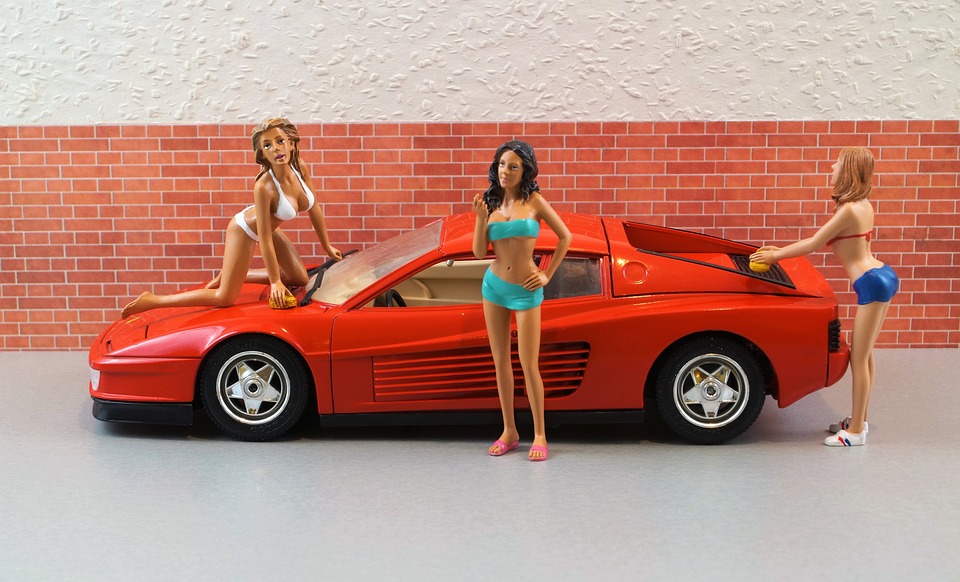 The Wet T-shirt Contest is in Full Swing.

There are new contestants arriving each day, posting the loveliest titties under wet clothes. So sexy! What's more, there are also the first comments appearing, of those of us who truly appreciate seeing these gorgeous boobs displayed in this exciting way. A few more comments, and we may even call the contest valid!

So if you haven't visited the Wet T-shirt Contest post (lately) head over there and check out what's new. I bet you'll see some recently posted tits with some transparent wet fabric clinging to it. Why don't you let them know how much you enjoy them, and that way we may find a winner. In fact, YOU could be a winner too, if your comment is nice and sexy. Remember, there are 50 PORN to be won by the best participant and the best comment. And there are only a few more days to go. But until then, here is another little Wet T-shirt story:

Competition at the Car Wash

It was a sunny Saturday morning, and Mary was sulking at home. Her sister Tiffany and her highly popular cheerleader friends were out having a car wash, but before they met up at their place. Trying to impress her friends, Tiffany went out of her way to humiliate her little sister for her Goth look. "Trying to attract some zombie lovers?" they were teasing. It seemed to have worked, as all the girls were giggling loudly at her expense as they drove away. Mary felt far from being actually humiliated, as she could see the ditsy pretentiousness for what it was. However, she was majorly pissed off at Tiffany for pulling such low punches. She wanted to get back at her, so she called her friend Sass over.

"Hail Mary!" Saskia called out as she entered Mary's house. Sass was into the punk style, sporting short spiky hair, wearing a white ribbed undershirt and tight black jeans. This also matched her wider shoulders and small boobs, whereas Mary was a lot curvier, had quite big boobs, long hair died jet black, and preferred skirts and dresses, such as the frilly black lace dress she had on.

When Mary told Sass about Tiffany, Sass just gave her an evil smile, and suggested: "Let's crash their party! Those bitches are probably offering the same stupid spiel you'll find at any teenage car wash: bikinis and cut-off jeans shorts. Let's show them how sexy the freak girls can be!" This is what Mary loved about Sass. She had no shame in expressing her full sexuality, while staying clear of the mainstream. So they grabbed a couple of buckets and sponges and jumped into Sass' car.

Arriving at the car wash, there was already a long line of cars waiting for their turn to be washed by the sexy, bikini-clad cheerleaders. There was a lot of splashing and giggling going on, and a large speaker was blaring bubblegum pop.

"See what I told you?" said Sass. "Look at them: sure they may appear hot, but only as long as there is nobody really sexy next to them." And with this she parked the car on the other side of the street. With a black marker she quickly painted a sign on the back of a conservative campaign poster she had removed from somewhere, saying only ALTERNATIVE Car Wash. Then the two girls jumped out of the car, and started waving at the cars standing in line. It didn't take long, and the first one pulled over to their side.

"Look, we don't care so much about cleaning your car," said Sass, "cause we're guessing you don't either. But if you want to see some wet titties, you've come to the right place." And she slowly squeezed out the full sponge over her white undershirt. The soaked fabric clung to her thick erect nipples, and in the left one her piercing became quite visible.

Moving the dirt around on the guy's windshield was enough to jump  up and down sufficiently to let their boobs wobble a bit, and the guy paid them and drove away. But already there was the next one, with the third one closely behind.

"This is going so well, let's turn it up a notch," Sass decided, and grabbed a pair of scissors out of her car. "C'mon, stand up you little sluts," she was encouraging her nipples, pinching them, then pulled her undershirt away to cut a small hole into it, where her nipple could stick out. "Wow, you're so hot," Mary said. "Let me take off my bra."

Mary was quite proud of her new tattoos on her boobies. Around her wide areola she had a circle of thorns inked into her voluptuous tits. Once she was braless, her lace dress didn't leave much to imagination. Still, she made sure to pour more water over it. Her customers were accompanying them with loud cheers and honking horns.

It didn't take long, and virtually the entire line of cars had shifted to the ALTERNATIVE Car Wash, until the cheerleaders ran out of things to do. This is when the trash talk began. They were yelling insults, calling them "princesses of ugliness" and "sluts of the apocalypse", but with Sass on her side, Mary felt confident to reply: "Well, you bimbos should take a lesson from us. Are you offering these dudes anything really? Looks hardly like it! That's 'cause you have nothing to offer." And with this she pressed her titties against the windshield of two guys, who were cheering, laughing, giving each other high-fives, and sticking five-dollar bills in her dress. It felt nice to be getting back at Tiffany and her stuck-up friends. Being adored for her gorgeous body, and even getting money for it, felt even better. Sass was so right. This was the best decision ever!