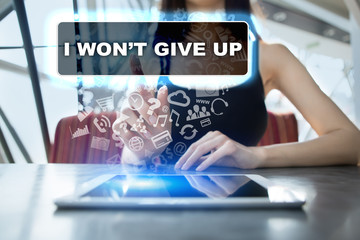 I won't fret
I won't run from my troubles
I won't eat if I've not worked out my daily bread.
I won't spend my penny for what I can't buy.
I won't borrow to live in luxury heaven because it's a yoke on my freshly neck.
I won't lie to paint myself a saint in art gallery of Rome neither will I lie that I'm most holy in the books of the vetican.

I won't cry because I'm man..
Yes ..! Male specie don't cry
We just cry within our soul
We cry when we don't get the love of our life
We cry for joy to hold her close and we become a unit....

I won't give up, I won't give in, I'll keep going on.
I won't trade my values for temporary pleasure it doesn't just worth the trouble.
I won't faint because the horizon is to far to conquer.
I won't give up because life's mountains are too high to climb.
I won't blow my trumpet loud to make a show that I have arrived pinnacle of wealth.
I won't feel bad because I am not you.
I won't talk too much so that I won't lie to impress you and exalt my ego.
I won't want to write any further because I have to stop here.