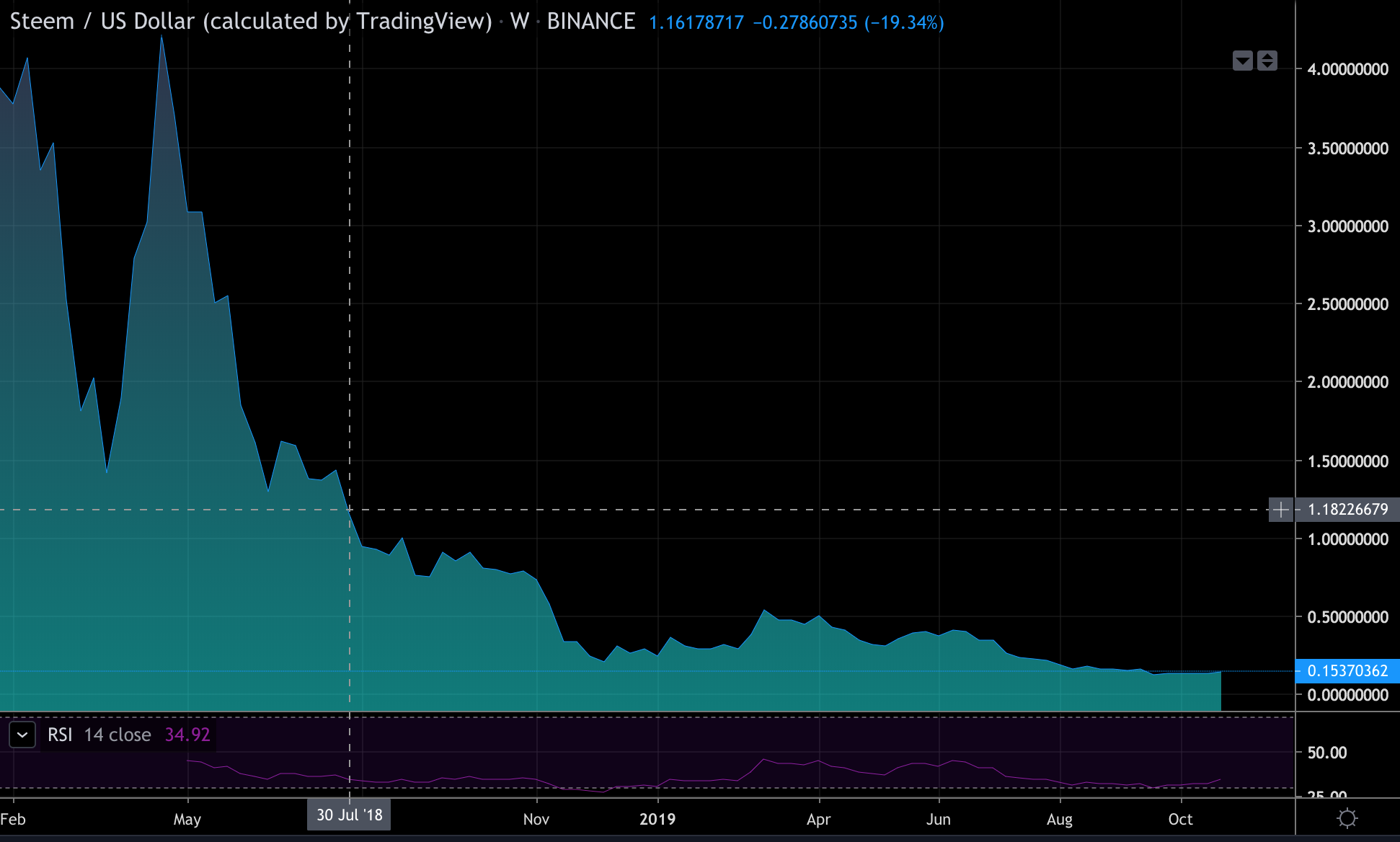 I loaded this chart up to show January 2018 - Today. See where my crosshair is? That’s what STEEM looked like when I wrote this note to myself on July 30th, 2018

I keep really obsessive and detailed notes. I’ve been pretty consistent about doing it every single day since I was about 16 years old. I use Evernote to store all this data and I keep backups on flash drives just in case something happens. Although, I’ve realized that it would be a good idea to print it all out on paper every year or so and keep a hard copy as well. It would be interesting to see the thousands of note files that I have created over the years all in one gigantic book.

Whenever I’ve got some spare time, I’ll just randomly click on a random note from a random date. Sometimes I’ve given the note an interesting title to summarize the day but it’s mostly titled by just the date — 11/2/19 is the title of today’s note, for example. This is what most of them look like.

Whether I read a note from 1, 2 or 5 years ago, there is one feeling that I always get — it’s like stepping into the mind of my younger, more naiive self and taking a look around.

I get to see what I was thinking about on a particular day. I also get to see what things I was working on for that specific day and exactly how I thought about those things.

Today, I opened up a note from July 30th, 2018 — titled: 7/30/18. Nothing particularly special happened on this day, but I was thinking a lot about Steem. I wrote several pages worth of notes about how I perceived STEEM and the future that I imagined.

Look at the chart at the top of this post… What do you see happening around 7/30/18? That’s right, you see the price tanking from $4 to $1 and it’s tanking fast… really fast.

Obviously, I was nervous at the time. I get that impression immediately as I read the note. My nervousness was interesting though as it was counterbalanced by a feeling of opportunity and a sense that the future would get better.

Well, that was partly true.

In terms of opportunity, yes — that was 100000% true. If you would have told me back then that I would eventually work on SteemLeo and be a part of a bunch of different projects springing up all over the blockchain that are doing amazing work, then I would’ve called you crazy.

I was a no-name dolphin who was just grinding away making posts like every average Steemian at the time. There was nothing special about my activity on Steem. Very mediocre. Very average. But that's a story for another day.

In terms of price action and the value of the STEEM that I held on to so dearly? Yeah, that’s a completely different story. I had around 15,000-17,000 STEEM at the time and I was ambitiously chasing a 20,000 STEEM bag. This is the second major milestone I set for myself after joining the blockchain in the first place — the first milestone being 10,000.

I already had my sights set on the third milestone of 50,000 STEEM, but I knew that a lower price would be necessary. At the same time, I didn’t believe STEEM could go any lower.

That’s the funny thing about my note — I was talking about how I was relentlessly trying to scrape up as much STEEM as I can because I thought it was an absolute fire sale. In my note, I actually said this, verbatim:

”I need to get my hands on as much STEEM as I can while the price is so low. When it gets back over $3, that will be a great opportunity to reap the benefits.”

It’s been a long trek downward from there. It’s been fun though, I won’t lie. That 20,000 STEEM goal seems absurd to me now. Today, it’s easy for me to pick up an extra 20,000 STEEM. Back then, it seemed like one of the hardest things I was working for in my entire life.

My notes make me laugh, but more importantly — they put STEEM into the proper perspective for me. STEEM is super low now. like… way lower than I ever thought possible for this amazing blockchain. We’re not perfect, but Steem is still the best thing out there. Call it my opinion. Call it intuition. Whatever. I’ve believed in this blockchain wholeheartedly for several years now. I’ve been on all sorts of ups and downs and I’ll be here for a lot more.

Those who are short-term thinkers will sell their STEEM as fast as they earn it.

Those who are long-term thinkers will hodl that STEEM until it’s worth something meaningful to them.

To me, STEEM is about more than money. $3 is (and has been) a target price for me for a long-time. It’s not like I’d sell the whole farm at $3, but I definitely would cover some bases and take some profits around that price.

Anyways, these are just some ramblings on a Saturday night after a nostalgic look at some of my old notes. I need to do this more often.

Ahh.. $3 STEEM.. I remember those days.. I remember thinking 5K was damn near impossible.. now I'm eyeing 50K STEEM plus almost a million other tokens.. in the end I believe it will all be worth it

It's weird. Like i kinda remember but don't at the same time. I was such a noob for the first bunch of months haha it's all a blur! It's gunna come around. Looking forward to when it does!!

If steem and blockchain prices represented the internet, I would say we are in 2002. Play the long game, influence and change the world/steem community one day at time.

I always see steem's price as one dollar @khaleelkazi :D
But anything beyond that price is already a bonus. :)

I truly believe this to be true:

My notes make me laugh, but more importantly — they put STEEM into the proper perspective for me. STEEM is super low now. like… way lower than I ever thought possible for this amazing blockchain. We’re not perfect, but Steem is still the best thing out there. Call it my opinion. Call it intuition. Whatever. I’ve believed in this blockchain wholeheartedly for several years now. I’ve been on all sorts of ups and downs and I’ll be here for a lot more.
The opportunity now is greater than ever before — this is another common denominator in dozens of my notes over the past one to one and a half years. I’ve been telling myself this regularly. That the opportunity now is greater than it was yesterday. As the price gets lower and lower, the ease of earning STEEM gets higher and higher.

It is my driver now.
✍🏼 Shortsegments

I also like to share similar thought process back in April 2018. I mistakenly bought a Baikal Giant N+ miner for $1,662.41 from Ebay which can mine Monero or Bytecoin.

After a a week, I figured out that Monero is switching algorithm, mining profit for that CryptoNight collapse. I was smart enough to sell the miner for $500 and bought around 500 Steem.

The coincidence is that I assured myself that when Steem will be $3 piece again that I will recuperate my mistimed investment on that miner.

It is amazing how things can change beyond our wildest imagination ;)

Don't know much about Steemleo. Your post inspired me to use the tag for the first time tonight. I had a very positive intuitive response when I first heard about Steemleo. All the best! And, congrats on the consistency in your daily notes. That's a super cool ritual!

Here is some LEO for you.