A Story of Curiosity | Go Broad in Order to Learn Deep 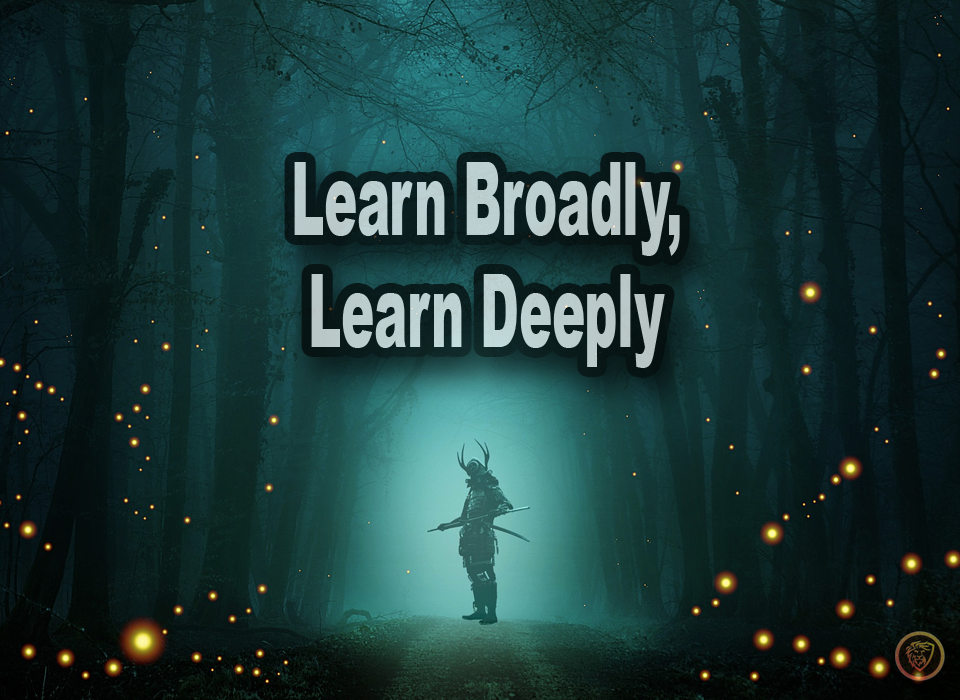 Be curious about the broad nature of things but spend the vast majority of your time on cultivating a deep, fundamental understanding of a few topics of great interest.

Growing up, I was never a good student. It’s a funny dichotomy, because I wouldn’t consider myself a bad learner, but I was definitely a bad student. In fact, I believe that I was a better learner than nearly everyone around me as I was growing up and going through the motions of the education system.

I grew up in a nice neighborhood and had access to one of the best schools in my state. The high school that I went to got many awards and won many championships — athletic and intellectual. While I had access to this, I never really appreciated it. I know that someone else could’ve taken my place at the school and gotten a great education and would have appreciated it far more than I did.

Instead of paying attention in school and focusing on getting good grades like everyone else, I played my own game. I deployed the Pareto principle — My goal was to spend the least amount of time on school work and still get the majority of the results that everyone else was getting. I realized that nobody was really learning anything at all. They were simply memorizing and regurgitating what the teachers spewed out in class each day.

So instead of wasting time on things like homework, I would simply get high grades on the tests, which would always keep me between a D and a C average. This drove my teachers and parents absolutely insane, but it made my life a lot easier.

It gave me the free time to explore areas of interest. To build a high degree of curiosity and learn things that actually mattered to me. While everyone else was hating their schoolwork and wasting the majority of their time on it, I was exploring things that would build the foundations of who I am today.

One area that I got heavily interested in was investing. I first learned about trading stocks and quickly gravitated towards binary options. I found the high-paced and high-risk environment of options perfectly suited to my personality.

I still remember having my laptop in high school and getting in trouble for using it to trade during class. I would spend most of my time learning, trading, observing and ultimately turning a profit during my high school years as a binary options trader. My primary focus was on buying cheap puts and calls in the SPY that were slightly out of the money.

I would wait for a downturn or a big uptick in the market and that would be my opportunity. Before market close, I would buy either a put or a call and then wait for the next morning. Typically, my positions would be closed that very next morning in the money or I might have to wait a few days for it to work out.

I had a high hit rate and a very low rate of losing money. When my contracts weren’t going favorably, I would typically hold on to them until they were worthless. It was an all-or-nothing strategy. For some reason, it worked for me and I did pretty well with it. I kept things simple and I kept my head down and did a lot of research.

During this time, I also picked up other curiosities. All of them were encouraged by the backbone habit I developed of reading books. Now we have one of the most odd things that my parents/teachers could’ve expected. I started reading books for fun. Not the books that were assigned in school, but books that I assigned to myself.

In fact, I would regularly forgo doing the assigned schoolwork in favor of waking up at 5 in the morning and reading whatever book stoked my curiosity that day. I would be so tired when I went to school, that I would easily do my trading and zone out of class until 3 PM rolled around.

I was curious about about the broad nature of things — often reading books about science, art, communication, life hacking, etc. One of my favorite books to this day is called Sapiens, which I read as I was exiting high school and going on to my first year of college (which I subsequently dropped out of — a story for another day).

While I had this broad curiosity, I understood something that I felt nobody around me ever did — my broad curiosity was balanced by a fundamental desire to understand certain areas of interest in a very deep manner. Investing is one of the prime examples of this. I came to realize that everything I learned broadly by reading these seemingly unrelated books could be tied into investing and used to deepen my knowledge of the game. Various techniques, tricks and tools that I picked up from reading this broad range of books have served me well in becoming a better investor.

I credit my childhood learning not to school nor my teachers, but to the books I read and of course, the internet.. which acted as the ultimate library of knowledge. I realized from a young age that the dawn of the internet meant that school would continually lose its value in my eyes. Nowadays, anyone with a smart phone, an internet connection and a deep sense of curiosity can easily learn any skill they desire.

Great story, I couldn't help but relate your story to people who go to college to get a job that they hate for the rest of their lives..and the 10% who may not be educated, started their own business had have not only found happiness, but freedom as well.

Exactly. My family has always given me hell about not finishing college and being against the formal education system. It's not that it's wrong for everyone.. I just know it's wrong for me. I also know that the majority of people who graduate and get a job are often unhappy.

I was Just like You Growing Up and I Loved Trading the Market so Much that I became a Stock Broker. It was my Career for almost 28 Years. What is really interesting now is that I Have not Followed any of the Stocks or what the market is doing for like 5 years now. For some Reason it just does not interest me anymore......... @khaleelkazi

That's awesome! Steem will do that to ya! It makes you forget about everything else ;)

Reading books is one of the best ways to learn about the world around you, but experiencing it the way you did was the better teacher of life, I think! Thank for sharing your story in a very well written article, my friend @khaleelkazi. Have a lovely Sunday!