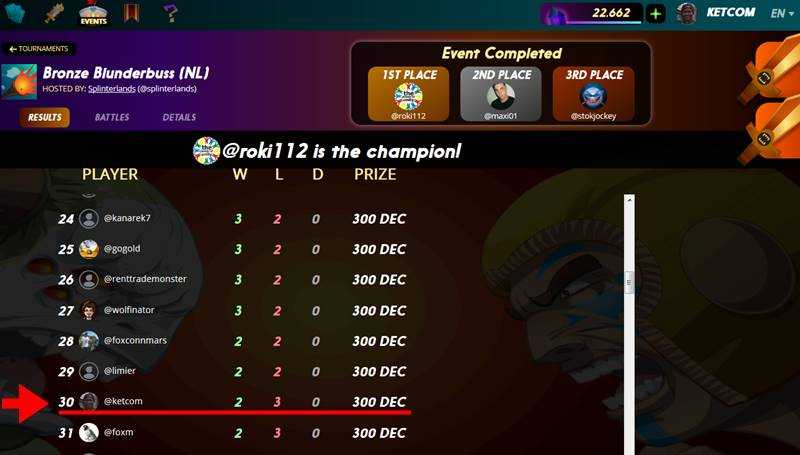 Finally won some DEC in a Splinterlands tournament

Thanks for dropping by and here is a summary of my actifit report today.

It was a cloudy morning and all signs showed that it might rain today, the cloud was teasing us and making us rush to where we were going which for me was the office. You could hear thunder rumbling from afar, lightening splitting the clouds, no sign of sun and no rainfall but it was surely going to come.

I finally made it to the office and something in me said it could rain now if it wanted to. Lol. That was selfish of me I know. Lol. We heard a loud bang and from the information we gathered the transformer supplying power to the area had blown. Hmmm. What a day this is going to be. The rain had started and there was no fuel in the power generator that acts as substitute to the National power grid. Anyways, at the end of the working hour we did the much we could do.

I did a lot of upgrades on my Splinterlands cards today, trying to up my game to maintain the Gold III league and even go further if those nasty opponents I keep getting sometimes can just allow me win 10 battles in a row. Lol.

After dec added for second win

I was able to complete my daily quest with less stress compared to the previous day. I also won 300 DEC twice today in two different Splinterlands tournaments I entered for. That really felt great as I had been trying for a week without winning anything. For me it is a good thing, maybe someday I’ll come out tops. The guy that knocked me out in the first tournament went on to the finals and came second position overall. I am still maintaining the Gold III League level as the battles are getting stiffer, but the harder they come they fall. Lol. So watch out!

I went to feed the rabbits as my assistant will be resuming next week and did a test for pregnancy for one of the doe (female rabbit) using the palpating method and it turns out she is pregnant. So we wait for another two weeks for the babies to come. I am really getting very good at checking it, I think in the last 6 months all my positive findings has been 100% correct.

That was it people. Do have a lovely night rest.

And before I go here is this dance song from Skiibii featuring Reekado Banks called Sensima. I do hope you like it and can feel the beat and fashion sense. Lol.

Thanks for reading my post, like I always say, upvote it if you liked it I’ll truly appreciate that. Keep your comments coming and follow me if you have not already done that. Again, thanks a lot for your support to me always.

If I had more time, I'd probably join you in Splinterlands, looks like fun. Maybe I should begin buying some DEC, the more, the merrier!

Hey @evernoticethat, it is a fun investment and strategy game the way I look at it because you're making money and having fun.👍

Please use my referral link to join an you'll get a bonus from me I am still trying to figure what it should be 😁. But for sure we'll both be happy.😍

Thanks man, looks like I already have an account under evernoticethat which I have not had time to use. I thought Steemmonsters and Splinterlands were two different games! :)

They are one and the same my dear. Kudos.

Good job @ketcom with your @actifit steps. It does get a bit old after it continually rains, but there will be a dry time I'm sure. Too bad it can be a bit more moderate, rather than all at once, LOL. Have a good night , my friend!

Thanks a lot my dear. Yeah the rain keeps coming all of a sudden but I think we are nearing the end of it.

Wow @ketcom it sounds like you had a day!!!
I think I need to go get some gas for my generator.....
That will get me some more @actifit steps....
Cheers my friend @actifit step on!!!😀

Please do get it while you can. Lol.

Thanks @ketcom, you take care as well! 😀

Great job with the stepping🏃 despite the rain ☔. Good thing you made it dry to the office but the black out really sucks 😔
On a positive note congratulations on your progress with the games and also the pregnancy of your doe bunny🐇.
Fantastic choice of tune 🎶 to usher in the weekend 👌.
Speaking of weekends, have a fabulous one ahead🎉. Keep stepping and enjoy your activities 👍 😀

You have accordingly been rewarded 64.875 AFIT tokens for your effort in reaching 6145 activity, as well as your user rank and report quality!
You also received an 0.72% upvote via @actifit account.
Actifit rewards and upvotes are based on your:

Congrats to the success with your rabbits @ketcom, and I hope that transformer can be fixed soon, you hoped for rain and got lightning, Karma lol, and nice that you won some DEC, have an awesome Sunday.

Thanks my dear, I do hope the transformer gets fixed soon too.