When you have packs of only somewhat domesticated dogs that live in packs all around the country there are two things that are guaranteed: They will replicate like mad and they are going to suffer injuries during competitions for food and mates. For the most part we focus on sterilization but when we see injuries that are this extreme, we have to intervene.

This image will be used twice in this post, I didn't want the preview to show the graphic content

So while we do not know the nature of the injury, it does appear as though this male got into a fight with another, probably stronger male (he isn't very big) and lost. The fight appears to have gone on for some time and I can't help but admire this mid-size pupper's resolve because in most interactions of this sort, one of the dogs will give up and the other leaves him alone. Very rarely do these battles go on long enough for one of the dogs to have its throat nearly ripped out. This guy actually does have an "owner" of sorts but for many Thai people this word does not mean what it means to you in all likelihood. The owner has been trying to keep this wound clean but never wrapped it, nor does he keep the dog indoors or even in his own yard. The dog simply roams and therefore is subjected to a world of parasite infestations around the clock. It shouldn't be terribly surprising that this fella was not terribly interested in our intervention and it was only with the help of the "owner" that we were able to lure him into a transport kennel at which point he continued to be aggressive towards us. I suppose I can understand why. This guy is in constant pain and probably doesn't understand why. That's not a smile

The owner, who is out of work because of Covid, had to accompany us to the veterinarian, and he had to be sedated in order for the vet to work on cleaning and dressing the wound. Thankfully, when he woke up he was a bit more receptive to our advances (with the help of some fried chicken) and seems to have realized that we are not a threat. 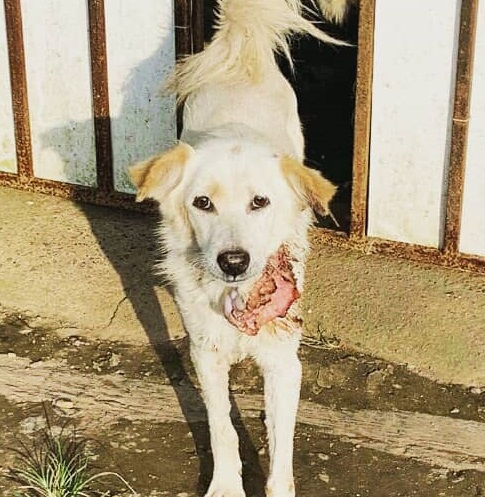 Unfortunately, during the blood tests we discovered that he also has cancer, so this is going to be a long road to recovery and this couldn't come at a worse time since once again, our funding is almost completely dried up. Therefore, at least for now we are not going to be able to treat him for the cancer. We will keep an eye on him where he lives (after his wounds heal, he is still with us for now) and hopefully we will be able to give him the doggy chemo that he needs. According to the veterinarian, the cancer is in the beginning stages so there is still plenty of time.

This street-fight attitude of primarily the males is another important reason why sterilization is so important. There are already entirely too many stray dogs here in Krabi as well as the rest of the country and when nature calls, the dogs are gonna do what dogs are hard-wired to do... they will mate. If there is competition, they will fight. If the wound ends up somewhere that the dog can reach with its mouth, they can normally clean it themselves well enough to prevent infection, but well, this one being on the neck and all, he couldn't exactly do that.

I am actually very surprised at this dog's ability to refuse to die since the wound on his neck is at least a month old. We are hoping that he can pull through and once the stitches have healed I will post an update. For now, he is stable and will likely survive. He's made it this far, let's just hope that he doesn't go back and immediately get into another fight.