There are a lot of stories about strays around the world that have captured the hearts of the people that they have met and a story like the one of "Kupata" is about an endearing as they come.

Kupata lives (lived, now) on the streets of Georgia (the country, not the US state) and was one of those stray dogs that was just so unbelievably friendly that everyone knew who he was and unlike a lot of stray dogs, he ended up being quite well-fed and looked after. His name means "sausage" in Georgian and he god this name because, well, he is a bit fat just like a sausage.

While he was already beloved by the community that he resides in he gained a real claim to fame when he started protecting school children any time they needed to cross the road to and from school. Of course there are plenty of hoomans that are already assisting in this endeavor, but Kupata knew they needed his help somehow. Kupata will wait for the kids to get out of school, sometimes for hours and as soon as they enter the crosswalk he springs into action barking at all the approaching cars and will chase the ones that don't respect the law of the crosswalk. As soon as one group of children are safely on the other side, he will return to wait for the next group. 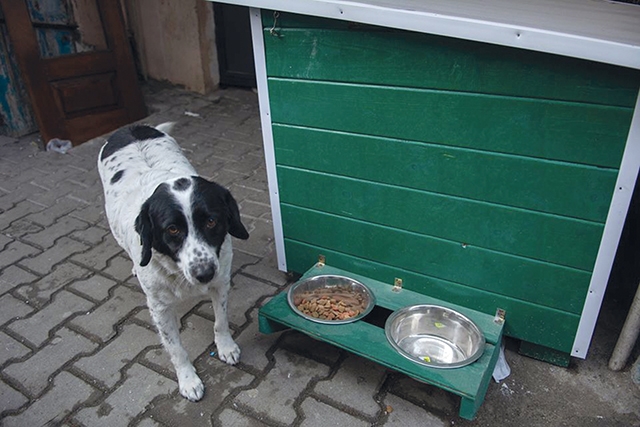 For his heroic efforts the community chipped in and got him a dog house, which sits near a butcher that regularly gives him sausages and it is rumored that this is part of the reason why he got his name.

Later in an online contest, Kupata was awarded the people's choice award and has his own "Walk of Fame" star on Memed Abashidze Street in Batumi.

While Kupata's story is a very special one, this is the way we feel about all of the strays that we have in Krabi province as well. While they aren't necessarily protecting children as they cross the road here, they do have a special sort of kindness in them that just needs to be reciprocated in order for it to show. Virtually all of the animals that we have helped over the past 2 years immediately came out of their shells, so to speak, and immediately starting showing the kind of companionship towards humans that make them "man's best friend."

Congratulations to Kupata and perhaps this story can help others to see how important it is for us to help the homeless animals on the streets in Krabi, in Thailand, in Georgia, and the rest of the world.

If you would like to see how you can help out, or simply spread the word, please visit our website at

Krabi Animal Welfare is a charity run entirely by volunteers and are a registered non-profit organization. We aim to relieve the pain and suffering of dogs and cats within Krabi Province.

where I live there are very few stray dogs but this has a lot to do with the fact that there are parts of the country where they still capture and eat unclaimed dogs and cats. This is an awful way to think about animal control but it is effective.

yeah it's a pretty awful way of thinking about it for sure. I have heard rumors that they go beyond strays and actually will steal people's pets for this as well... but you can't really trust rumors... i certainly hope that isn't the case.