Community dogs are quite common in Thailand

While this is not as good as someone giving a stray dog a permanent home it is actually quite common for people to look after the strays in their neighborhood as much as possible.

We see this is primarily Buddhist areas where the middle class live and while these dogs do not have a specific owner they do have safe spots where they can rest and with the rest of their day they wander around and get handouts from the community. They don't really cause any problems and because of the way they are treated by the people who live here they aren't in any real immediate danger.

There happens in my own neighborhood. Even though I have 3 dogs of my own, some of these neighborhood dogs will come by to say hello and also to get some treats a couple times a week. 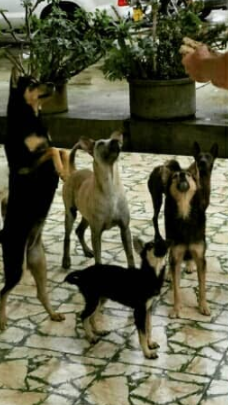 Some owned dogs are not very keen on them coming by but because my dogs are all rescue dogs, they are socialized and are not disturbed by someone else coming by as long as everyone gets treats and not just the visitor. Dogs have a hierarchy after all and while my dogs will tolerate the visitor, they better not interfere with their food-delivery!

I was sitting on a friend's porch and one of the larger neighborhood dogs game by and was strong enough to open his gate and let himself in. He approached us with his tail wagging, drank some water from the bowl that my friend leaves on his porch and then just settled in for a nap.

Later on in that year I noticed that this same dog was wearing a t-shirt because it was getting colder outside. The dog probably didn't need this shirt at all... actually, if he is anything like my own dogs he probably hated having it on, but it was a nice gesture. 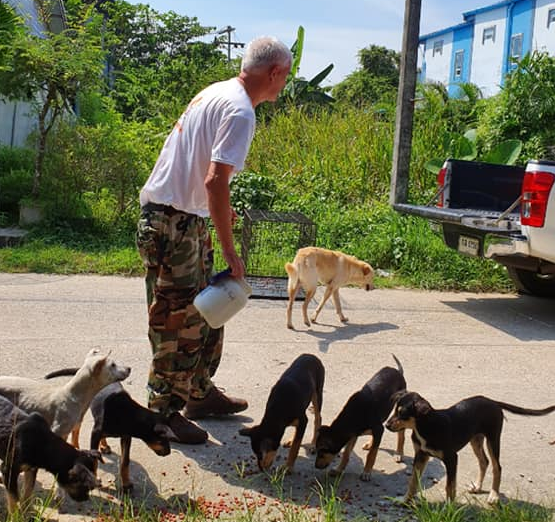 A lot of the people in my neighborhood don't have the time or resources (and probably desire) to take on a dog full time and if they don't this is the next best thing: Just providing what you can is a really nice thing to do to ease the suffering of these animals.

If you are in a part of the world where street dogs are common and you don't have the time or money to look after one of them, I strongly encourage you to do what you can by giving them some food or maybe just allowing them some safety in your garden. They really don't deserve the bad hand they've been dealt in life, and you could be the thing that changes everything for them.

Dogs become angry because of people :-(

outside of rare situations and uncommon diseases yes, you are exactly right. Dogs learn all of their fear or anger towards humans because of the way they are treated by them. Imagine if every single time you saw a particular creature it threw something at you or chased you away? You would probably be afraid of that animal too!

Yes it is!
Unfortunately, people do not understand that without animals, the world would be empty!

But if they do not like animals, then why offend them? !!!
I don’t understand this and will never understand why they are so cruel?

As a fellow animal lover it is very difficult for me to understand why anyone would ever be cruel to animals especially when those animals mean them no harm.

Because they are NON-HUMAN!

Evil takes on many forms! I have a rescue that was badly beaten as a puppy. He is sweet, but Always scared!

But he's beginning to enjoy petting...we'll get there, and he will become a lap dog eventually!