Swimming with free-living dolphins in Kaikoura 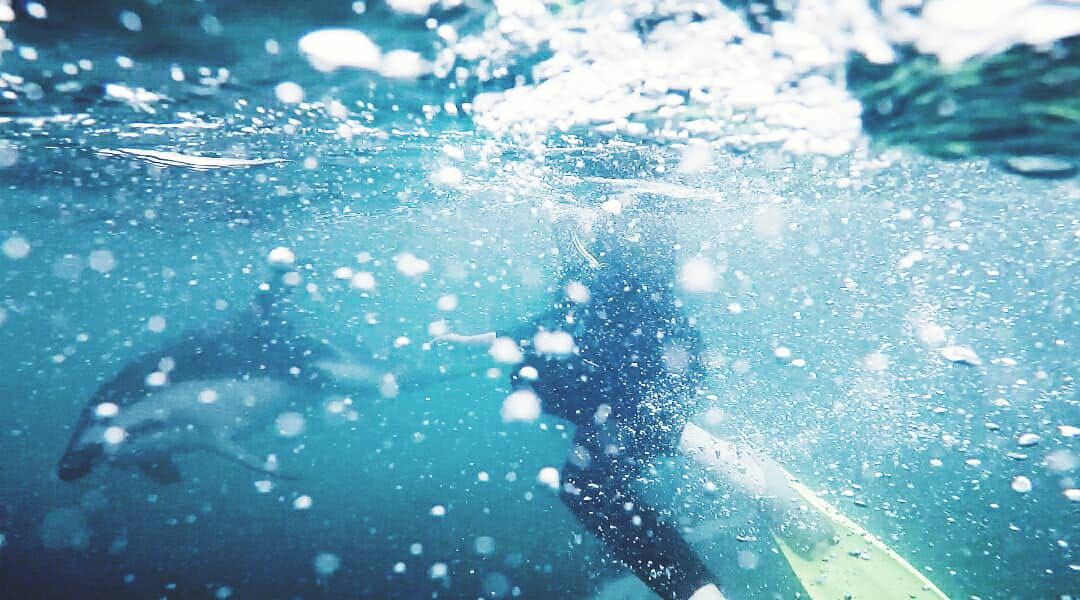 By far we had the most amazing experience in New Zealand in Kaikoura. Yes, the name of the city is probably very unknown to the most of you. To be honest, the city of Kaikoura was not on our screen before we flew to New Zealand. We really never heard of the city before. To be honest, that's not a miracle. Actually, Kaikoura can also be described less as a "city". There is exactly one "long" street with a few shops. I would rather call it a small place. I do not remember how we came up with the idea of swimming there with dolphins, but we heard about dolphin tours that started from there.What we were particularly excited about: The tour went out to the sea and the dolphins we were to visit were free-living dolphins. In retrospect, it was the best decision we made in New Zealand to join the tour. As many places in New Zealand, Kaikoura was only accessible by car. Kaikoura is located along a long, north-easterly bay directly on the Pacific Ocean on the former alluvial soil of the Kowhai River. By car, the journey and the return together took about four hours. But now to the actual dolphin tour. We should not only see the dolphins from the boat, but also swim with them in the ocean!

For this we got thick swim suits and fins. Before that we had to sign that we would not get seasick and have sufficient swimming skills. Then the crew showed us a small film before the boat tour, which everyone had to see before going to the boat. There safety measures were shown and how we could make the dolphins with loud and buzzing to pay attention to us.When we finally got on the boat we drove out to the ocean for about 45 minutes until we discovered the first dolphins. There were really many, a whole colony and about 100-200 dolphins. They jumped out of the water all the time, so they could not be overlooked. We had already asked ourselves how it was done that they stayed with us and will not swim away. So when we found the dolphins, we were left one by one from the boat with the help of noodles and the crew. The waves were stronger than we expected. Before the tour, my sister and I were very sure about our swimming skills, but on the ocean it is so different! The dolphins found a direct hit with us and swam around us all the time.

Some have also lured them with loud noises and sounds. We were surprised how fast the dolphins swam. As soon as we had discovered a dolphin next to us, it was already gone again. But that was perhaps also because of the dark water, you could barely look a meter further - it was the pacific ocean! It was like a miracle that our gopro still took some great pictures. Admittedly: The dolphins were so fast that we had to cut out all the photos from videos we made. After about 15-20 minutes, we were called back to the ship with a loud sound, because the dolphins at some point had no more interest in us and swam away. Then the ship followed them again. As time went by, the waves got stronger and stronger. After the third time in the ocean, it was very difficult to get back on the boat. That was due to the extreme waves. Even with noodles it was very difficult. The crew had many problems with getting the whole people back on board. It was also the last time we were left on the ocean.

My sister is actually a very good swimmer and athlete, but she was thrown back into the ocean three times in a row by the waves from the boat. To be honest, at the moment I was a little scared for her, because the boat was not really soft and she was banging against the walls. Afterwards she also told me that she was a bit afraid. Another woman felt the same way. In the end it has to be said that it was a unique experience and we were more than happy to swim with the dolphins. The crew was super friendly and there were also snacks on board. However, I would recommend this trip to safe swimmers or you choose a day out, where there are just little waves. You can also ask the crew before.

Wow this post is stunning, I rarely see an adventure like this one here, thank you for sharing your amazing travel experience with us. ^^

Thank you for your nice words :) it was really an amazing experience 😍

I'm so jealous of this experience! It's definitely on my bucket list, especially since you were able to do it on their natural habitat and not in an enclosed venue where people profit from keeping wild animals in captivity. Were you able to take some videos?

Recently, we came up with an initiative to try and spread awareness of the Steem Blockchain on Twitter, which is why we kindly invite you to check out this post, we think you might like the idea.

Thank you :)) yeah it was important for us that they are free. Yes we Take some Videos. All the Pics in my Post are just shots from my Videos ;)

I read your Post about Twitter and making steem more popular to people who dont know it this Post was really interesting! To be honest i Just have a Twitter Account Just for Crypto News and Not using it really but i will try to change it and when i have more follower i will Post my steemit Posts there too!!

WOW - one of the things in life I always wanted to do but never did!
Amazing!

Thx for your comment :) yeah when you have the ability you should do it lol its worth it :)

Hiya, @choogirl here, just swinging by to let you know that this post made into our Top 3 in [Daily Travel Digest #696](https://goldvoice.club/steem/@steemitworldmap/travel-digest-696).

Thanks a Lot ☺️

We love your publication, what a beautiful experience. I hope you keep writing about your adventures.
we from @hijosdepacha share the same passion

I did this in 2014! I will never forget it. Probably one of the best things I have ever done in my life! Did you also go "whale watching"? That was an amazing experience too! :)..Here is my post: https://goldvoice.club/steem/@borran/swimming-with-wild-dolphins-in-kaikoura

Wow that looks really awesome. Very cool that you did it in kaikoura too. I am with you it is a lifetime experience i do not wanna miss it. No we did Not do whale watching because it was not the season for it the time we were there. Nice to hear that you tried it out yeah when i come to new Zealand next time it is definitly on my bucket list. Great pics and Videos in your Post ! :)