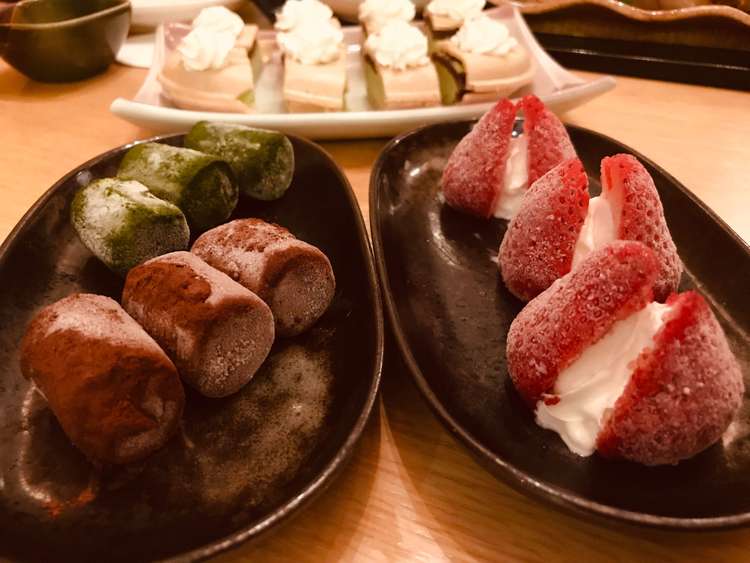 It's funny to think that I had two work gigs in Japan in my 20s and I stayed away from the local Food. One for 3 weeks and the other for around 2 months. I opted for instant noodles which I had brought from home, bread and the occasional Bento when it looked "appetising" enough. What a shame!!

Today, I could eat Japanese every other day thanks to The Hubs who is a lot more adventourous. As he was leaving outstation for a few days, he treated us to a nice Japanese meal.

Rakuzen came to mind, as it has always been one of my favourites. We had actually tried to do this over the weekend, but had to put our name down on the waiting list and it was a looooongggg list. I had hoped, it being a Tuesday, it wouldn't be as busy. No luck. But we only had to wait 10 minutes so we did.

We were given a nice booth in the corner. One that gave us enough privacy to talk. There are mirrors and indoor plants all around to set the cozy atmosphere.

Salmon Salada Maki (RM17/25Steem)
These Salmon Salad Rolls come 5 in one serving. One of us was going to miss out but I didn't think too much about it as I have one picky eater that refuses to touch any vegetable. Lo and behold, he took one anyways and loved it.

Gyuniku Enoki Roll (RM27/40Steem) is one of my favouites. Enoki Mushrooms rolled in slices of Grilled Beef drizzled with a sweet sauce. As you can see, 4 pieces dissappeared before I could even take a picture.

Yakinikujyu (RM29/43Steem). This Grilled Beef on Rice is served with Miso Soup. Great for the small eaters.

Yakinikujyu Rice Set (RM39/57Steem) is the same with the one above except it comes with your sides like Chawanmushi, Salad, Pickles, Fruits. This I shared with my youngest as he as small eater like me.

However, Japanese creates monster appetites with these kids and he ate most of it except for the Chawanmushi (lucky me haha).

Tepanyaki Zen (RM49/72Steem) for beef lovers. The Diced-Cut Beef Steak was requested medium and The Hubs opted for Garlic Rice as opposed to white.

Yakizakana Zen (RM39/57Steem), the grilled fish set with your choice of sweet or salty sauce. No prize for guessing which one the kid chose.

Chicken Teriyaki Zen (RM33/48Steem) if you want to play it safe. I realised there is no Japanese name for the chicken. Perhaps not as common as the rest. Do you know why? All their dishes that featured the Chicken was just called Chicken something.

Of couse I am a small eater because I have a sweet tooth and save space for my favourite part of the meal, the dessert. The Wafer Icecream or Itachoco Monaka (RM10/15Steem) comes in two flavours. Vanilla or Green Tea and we chose Green Tea (but of course) with a layer of Red Bean.

To try something a little different, we chose a couple more. _Strawberry Ice (RM10/15Steem) _which are just frozen strawberries with vanilla icecream, and the
Nama Choco Ice (RM15/22Steem), Ice Cream rolls, Chocolate and Green Tea flavoured. We decided the Green Tea Ice Cream Rolls were the best.

The food was good. The ambience great. My only gripe was they served the dishes with too much time in between each. So the ones that had theirs served first finished way ahead while the rest waited. The staff were very friendly and helpful though but I would have preffered if we had all our food within a 10 minute frame at least instead of what felt like forever. Hungry kids are not fun or polite. 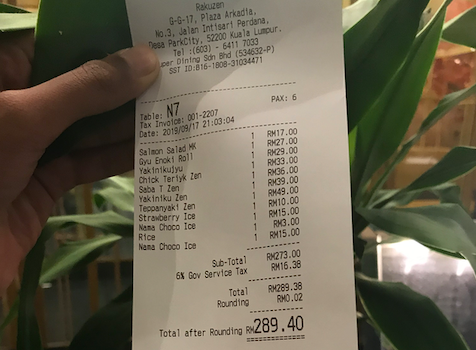 The bill for a family of six with hungry kids came up to RM289.40/421Steem (hmmmm, all that Steem I could have invested in hahaha).

Would I go back again? You bet. I also noticed this branch had a second level. So that means the kitchen is very busy in a packed house. The next time around, I'd make reservations first.

Though, one can kill some time by walking around in the courtyard while waiting. It has water features and fountains. There's also a playground around the corner for young kids. And cute dogs going for walks with their persons.

Thank you for dropping in and hanging out for bit. Truly appreciated.

Thank you for entering our <Made in Japan> Contest . Thanks to @kaerpediem, Tasteem has become a more attractive guide. We upvote your post, wish you the best of luck in winning our Contest!

Wow, what a great review! Shame about that steem you could have invested 😂😂😂

Maybe I shouldn't have put in the Steem equivalent hahaha

Thank you so much for dropping in @putu300 :D

LOL, Steem price is so low for now :D

Keep up your great work!

Right?!! hahaha
Hopefully not for long :)

Thank you so much @anggreklestari