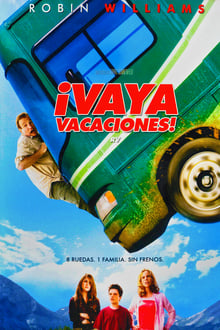 Today I saw another movie this great actor Robin Williams, all his films have made a resounding success, which I leave on the screen and in the hearts of much a great emptiness.

This is the Monru family wishing to spend a vacation, but Bob has to turn in a job and attend a meeting to be able to secure his job, since a new staff is making his posts tremble, he cancels a Hawaii vacation and rents a mobile home . Where Bob camouflage this vacation to be able to do both at the same time, since his family is increasingly distant.
But his family, seeing that all the plans changed, was in the disgusted motorhome, but they do not know the adventure they will find in these new vacations. Bob is putting both his work and the family union at risk, but in the end he decides who is important.

This is a comic that premiered in 2006, this was directed by Barry Sonnenfeld, its main protagonist Robin Williams, Cheryl Hines. Joanna Joëlle "JoJo" Blagden, Josh Hutcherson.

This is a film where Robin Williams debuted as a father who wants to recover his family but at the same time does not want to lose his job. Here he shows us at the end of the movie that the family is the most important thing of any job, jobs come and go but the family is unique and irreplaceable.

It is a fun movie, which can reflect the family life of some, so prepare your popcorn do not miss it.