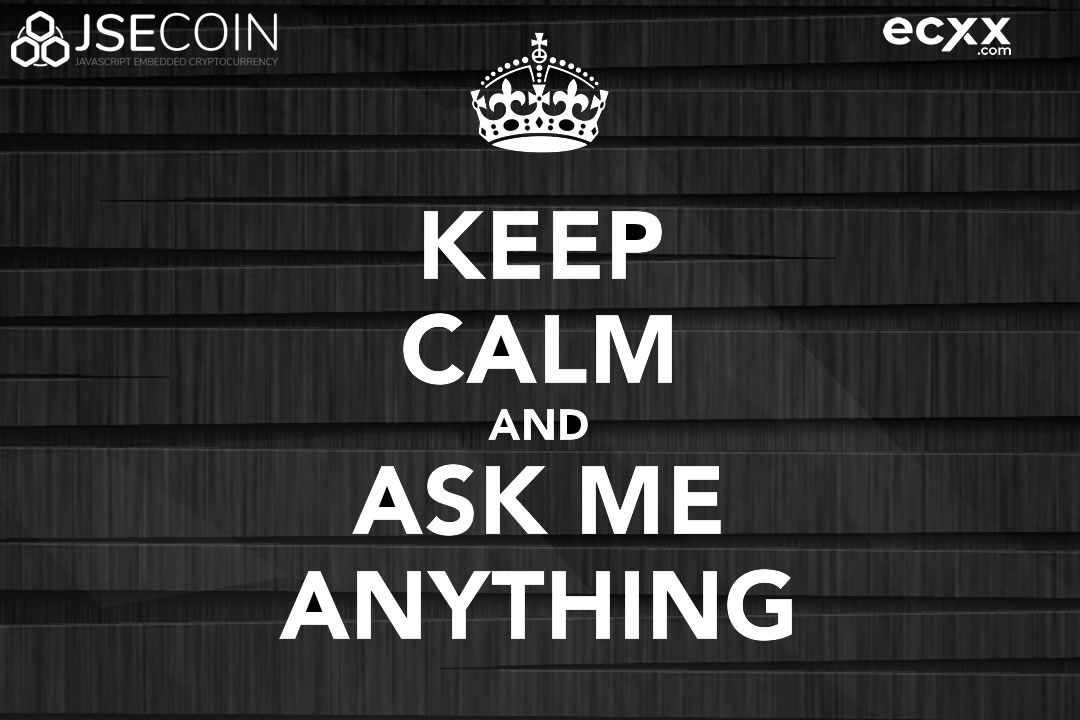 Below we’ve written up some of the questions and answers from our Ask Me Anything session wtih ECXX on the 11th July 20019.

Thank you to everyone who participated.

Are there any plans to issue a stablecoin?

We don’t have any plans to adapt the token or issue a new token to be linked to the USD or other “stable” based currency. My thoughts on this are rather extreme and obviously biased because I work in the blockchain sector but I believe that fiat currencies will ultimately deteriorate in value. This is almost guaranteed because of quantitative easing/inflation on a slow scale but I also believe the possibility of hyper inflation for major currencies/economies as well. This I believe could be the catalyst for major cryptocurrency adoption by mainstream/non-technical users.

How do you compare yourself to BAT?

I personally am a fan of the BAT project, we spoke to some of the people there when we were first starting out and they helped us with a few things which we are grateful for.

Tech wise it’s quite different. BAT is based around the brave browser so it requires users to download and use the browser and then website visits are recorded and the content creators rewarded. There are some benefits to this approach because it means you can reward youtube publishers for example who wouldn’t be able to add code to their youtube channel.

Our approach is slightly different as the webmaster adds a code snippet to their website and the javascript executes on any web browser after a website visitor opts-in.

I think Brave have also started injecting ads into it’s browser now which is another similarity but again our ad exchange is site based rather than client based. So the webmaster who owns the website sets up the advertising specifically for their site.

Are there any plans to do an STO?

So we don’t consider the JSE a security because it has real usable utility. No plans to raise additional funds from an STO at this stage.

We are monitoring how the tokenisation of equity evolves. We have had some discussions with a company that is seeking regulation in the UK and we will keep our options open on that front.

Any plans to raise any additional funds?

Yes, we would like to raise additional funding. We’ve looked at VC funding primarily in the past and this is something we are planning at the moment. There are lots of routes to take (one being an STO as mentioned) so we’ll continue to assess our options in an ongoing basis. Ideally bringing onboard a partner that can add value to the project that is not just financial.

What about team to run daily 1 JSE banner ad on JSE networks to promote to new users?

We could do this. Especially for remnant traffic although I think almost everything is fully brought out currently so we would be competing with the media buyers.

There’s actually some people using the banners from the banner pack and advertising their affiliate link as well. I’m not sure if this is profitable or not but I’m sure it could be if you did custom banners and optimised the sources etc.

Over 100 million people have seen the pop up now, but we have a long way to go to reach the levels of adoption we would like.

What about adding “stake” option on platform? Make users earn more by keeping coins without selling. To prevent inflation, cut as it is now 25% or else from all rewards, and give them to stakers in platform. It will be a cut, though same rewards as of now, so you can’t be afraid of influencing price. Give more reasons to hodl and attract more, as staking is hype for many coins. Why not?

I really like proof of stake algorithms. It’s something that could potentially overtake PoW and “save the planet”. My only issue generally (not related to JSE) is that the Rich get richer and it’s arguably less decentralized. I am from the UK so it’s not like capitalism is lost on me and I can see the benefits of rich getting richer as well > attracts institutional investment.

Relating to JSE I think it could be a good option if for any reason we can’t achieve a client-side consensus algorithm. I would certainly prefer it to a more general PoW system if we had to fully decentralize quickly. We actually spoke about running something like this on the desktop apps and I think this would be how we would do it. My preference is for a serverless client-side browser consensus algorithm however as noone has ever done this and there’s an elegance about the idea. Once the enterprise solutions are rolled out we have a bit of work to do on the merchant tools and after that we will be looking at this further.

In the short term I don’t think it would be beneficial to just pay a percentage for people to hodl tokens. We spoke about this before the original exchange listing went live and we figured we would need to pay at least 1% a month and even at this rate it probably wouldn’t influence peoples decision on whether to buy/sell. We would ultimately then have a currency with 12% inflation and the dumps would hurt more.

What about chrome and firefox browser extension to replace ads on site with JSE ads from JSE ad-exchange ?

We have issues with browser extensions. One of our users actually created a 3rd party one (not with our backing) but it got kicked out of the app store because they don’t allow any form of cryptocurrency mining.

We could potentially release one just for ads but I think it would be open to fraud and wouldn’t be assessible by our current machine learning algos because the site data would vary and it would be user based rather than site based. Also we would need to reward the end user some how for using the extension and seeing the ads. Could be used as a faucet type option perhaps but again traffic quality is normally an issue for these type of things.

What has been done to mitigate the threat of browsers banning web mining? I hear Firefox is doing this.

Chrome has been going back and forth on whether or not they are going to release an adblock which could be an issue but I think they are having legal issues with monopolising the ad-tech industry.

How your token will be used on the platform? What its utility and why it will be in the demand?

What about changing for publishers the “optin mining” to “data mining” – tracker data only (like U* data mining), a hidden code on website that only gather views and pays 250 coins for 1000 views, JSE can pay as lottery too. You can change views to hashes on JSE platform if needed to convert views in payable hashes. Result: no blocks or crypto warning, no resource consuming. Bots issue? You have tech to do not count bot views already, no need to optin, keep hidden, or make it optin just like European cookie “I agree”, or like ads with “deny/accept”. Truly eco and web friendly that will bring more publishers in, no more blocks from opera, yandex firefox crypto mining option…

We would need more scale to build up a data mining system I think. Things like behaviour/demographic analysis requires huge volume to build a representation for each user on the web. We are looking at leveraging some of our stored data “botornot” with the enterprise solutions. We have had a lot of issues with bots on the publisher side and have collected a huge amount of data on this. The data on bad users is more valuable than good users as it can add directly to a performance marketers bottom line and can also aid anti-fraud systems etc.

Also GDPR would be a headache and there’s a lot of negative sentiment on tracking/user data at the moment.

Are there any plans to burn tokens as the supply seems very high?

Whilst we have been assessing VC investment, exchanges, partnerships etc we have left these untouched for the moment. But it’s likely these will all be burnt. Potentially a schedule of burn is something we can consider (burn programme to run alongside buyback programme potentially).

After the ICO unsold tokens were returned to the distribution account where they are stored in a multisig wallet controlled but not owned by the dev team.

We had a number of options which were discussed at the time:-

We opted for option 3 obviously and a “wait and see what happens” policy. As Matt mentioned if we burn them we can’t get them back so it does wipe out other options. I think if we burnt them now as well it might be as effective as if we announced something once the altcoin markets come back and there is more investment interest.

How do you combat publisher/ad fraud?

Yes we currently run daily machine learning algorithms on the publisher network to look for fraud. Every site has some level of bot activity and this is absolutely normal and acceptable. The systems currently look for sites/publishers that are actively trying to game the system with fake traffic. The majority of the time these stick out like a sore thumb from the stats and are easily detected by the AI however there is always a borderline and we need to continually improve our systems to ensure that genuine publishers are protected. This is a big part of our value-add as media buyers don’t want to purchase fake traffic and publishers don’t want their earnings diluted by it.

Would be nice to hear from your perspective, how do you see the developement of cryptos in Asian sector.. challenges & new openings?

I think Asia is already one of if not the biggest sector for most blockchain projects. The population alone 4.5b out of 7.5b means it’s more than half the global market. I think the developments in India are concerning as the government there seems to be taking a negative stance. China is obviously the biggest player and I think they will continue to grow and we will see a lot of great projects and technologies come out China over the next decade. Singapore (where ECXX is based) is booming as well in general and they seem to have a very open stance to tech and blockchain. There was an article today about how one of Britain’s locally famous inventors has just purchased a property and is moving his business to Singapore: https://www.theguardian.com/business/2019/jul/10/james-dyson-buys-59m-penthouse-in-singapore

Generally speaking I think Asia is already a dominant market as regulations and legislative risk is hurting US developments. I also think (perhaps someone with more knowledge/perspective could confirm or deny?) that Asian governments will see crypto as less of a threat to their local currencies than the US and Europe.

There’s a lot of room for growth and developments are very exciting in Asia. For instance, China’s central bank are looking into their own digital currency in response to FB Libra. Modi has discussed how crypto standards will apply to India and Japan’s Financial Services Agency (FSA) also passed a new cryptocurrency bill. In Singapore, the Monetary Authority of Singapore is also exploring digital money using DLT.