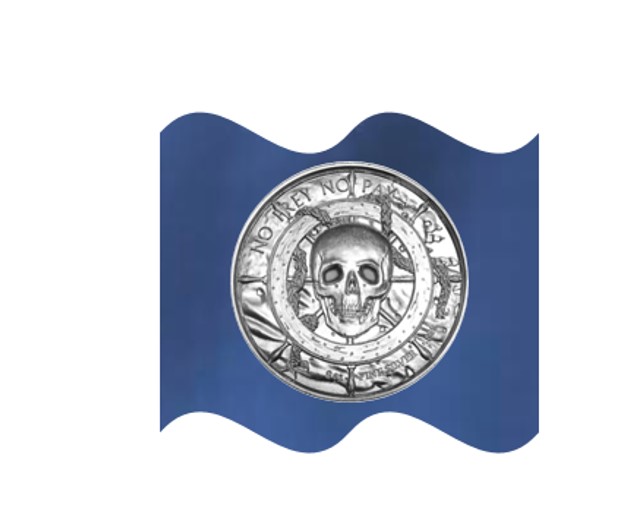 Tipper yelled in glee and took off running ahead towards their cottage with ‘Doug’ in close pursuit. The captain turned and gazed at Sally, holding her about the waist…

“Ahh’d be an auld brine clam if Ahh didnae tell ye 'att ye look mair bonnie efter each an' every toor!" He said softly in her ear.
“Och Joshua!” She replied softly as their lips touched in a warm kiss.

The sun was bright and the birds sang from the trees as the tall grasses of Elgol swayed this way and that in the morning’s breeze.

There was much to celebrate as the five good friends enjoyed the home-cooked Scottish stew in the cozy confines of the small kitchen. Galligan smiled and offered a toast of dark ale as Elspeth and Sally May laughed and talked together. The long tour was over and now it was time to relax and settle a bit as the calm village life soothed their memories of battle, rescue and the ardors of the silver market.

“A toast! A toast ta th' finest Keptin 'att ever sailed th' north seas!" Galligan offered up as the Captain laughed and clanked his mug.

Tipper raised his milk cup and leaned far over the table to clank his as well.

“Haw! Haw! Well, who else is gonnae pit up with a brine rascal likes ye, eh Tipper loon?!" The Captain jested as he took a long swig on his ale.

Suddenly there was a knock on the door in the front of the cottage and in the early evening darkness, a lone lantern could be seen. The Captain quickly got up to see who it might be.

There standing alone in front of the door stood Cockpit Officer Fisky.

“No salutes at mah house mate! Comes in!”

Fisky stepped in the fire-lit cottage and extinguished his lantern…

“If Ahh may Sairrr, gab ta ye aboot an important matter?" Fisky said as he glanced over into the kitchen and just noticed Commander Galligan and Elspeth.

Immediately he saluted again and stood straight before the Commander.

“At ease mucker, we're aw friends haur." Galligan reassured.
“Come in cheil an' take a chair!" The Captain insisted as Fisky removed his hat and nodded to the ladies.

Sitting back at the table, Fisky nervously fumbled his hat as he sat.

“Sally, gives the good cheil haur an ale!” The Captain said as he folded his arms and looked at Fisky.

With a tall, dark ale in hand, Fisky took a long draught and licked the foam off his upper lip.

“Noow what is it att's got yer fettles aw' in a tangle cheil?” The Captain asked.

“Well… if yer mind is made up, than Ahh will consent...an’ sign th' release fur th' Royal Navy board..." The Captain said in a solemn tone, “But ye will be sorely missed Fisky! Yoo're sure aboot thes?"
“Sure as Ahh’m sittin here, drinking ale with two fine Officers!” Fisky replied soberly as he held his glass with both hands.

“Well, Ahh guess Ahh shoods nae be tay surprised, Ahh knew it woods come at th' end of one of these toors! Yoo've bin a braw Officer an' a trusted mukker! Ahh wish ye naethin' but th' best!" The Captain said as he winked and held out his hand.

“Thenk ye Sairrr! An' Gawd bless ye!" Fisky said with a deep expression of sincere loyalty on his face.

“Congratulations Fisky!” Galligan added, extended his hand as well, “Noow who in hell is gonnae keep th' midshipmen in line?!”

Boy Tipper, who up until now had just been listening to the conversation from the floor with ‘Doug’, spoke up…

“Consarn it Fisky Sairrr! Noow who's gonnae play ball with me oan th’ Silverton?!" He asked with a sad face.

“Och come noow Laddie! There's a lot of crewman who will play ball wi' ye! Ye jist have ta ask is aw!" Fisky replied smiling as they all laughed and nodded.

Fisky didn’t stay long after he had made his request. Lighting his lantern again, he nodded one last time to all before stepping out into the dark night. The Captain watched him slowly walk down the narrow path with the door wide open until the lantern disappeared into the darkness...

“Thaur walks one of th' finest sailors anyain coods ever ask fer…" He said in a saddened tone.

"Noow ye might be wonderin'...jist hoow lang we'll be takin' uir leave haur in th' peaceful Village of Elgol, Skye? Well... Ahh hav asked fur fife new toor suggestions an' hav received only thee! Fife was speart fur an' fife it will be! Och hoow Ahh hates a whieest crew! Do yer duty an' pitch-in! If nae fur me an' Commander Galligan, than do it fur auld Fisky, who gave th' best years of his life ta th' mighty Silverton!" 🤨-Keptin

Good ‘ol Fisky. I am sorry to see him go, but he’s sure earned it.