Who are you? (Story) 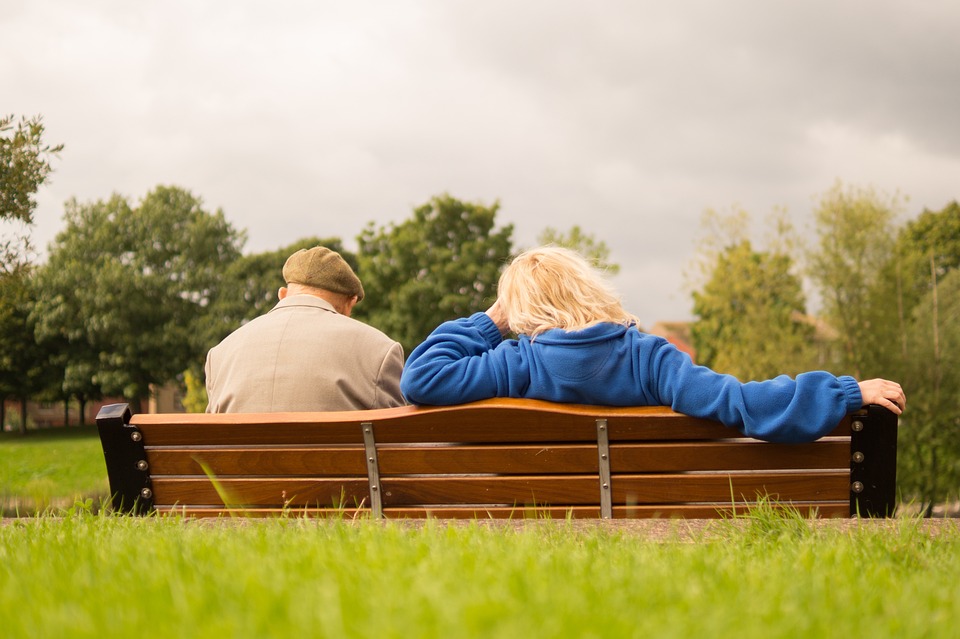 The couple of septuagenarians sitting on a bench in the square on weekends, for a year has been a ritual.
She arrives accompanied by her daughter and granddaughter, while he does so an hour later.
Her youthful beauty, although already mistreated by the years, still tries to show her off and for that reason, as a bride who goes to the altar, she is always neatly dressed, made up and perfumed.
The words of her ten-year-old granddaughter are common.
-Grandma, you smell like roses.
She smiles and responds with a finer voice.
-I'm a flower.
-I'm a butterfly," answered the girl, who also gave her a high-pitched voice.
The little girl, restless and playful, before the arrival of her grandmother's friend always retires with her mother to play in the playground.
-May I sit with you, beautiful lady?
Dressed in a suit or sportswear in the style of the mid-twentieth century, she usually brings her a gift from those she has always liked.
Flowers, chocolates, a handmade necklace or just a book.
Today he brought one of Neruda's poems..
-What's your knight's name?
-Excuse me, miss, for my discourtesy, my name is Paul. What's yours?
-My name is Matilde.
-Beautiful name and so it happened to be the name of the wife of the poet in the book I brought him.
The book referred to is "One hundred sonnets of love", which the author dedicated to his wife Matilde.
He asks you again:
-Can I sit down and go with you?
She after a few seconds in silence, in which her attitude is thoughtful, finally responds.
-You can do it, but keep your composure.
He does this and after a few minutes of talking about the roots of the name and reading him some poems from the book, they go on to talk about the everyday facts of his life.
In one of those moments she says to him.
-You remind me of my missing husband.
He puts on an astonished face and asks him:.
Disappeared? How did that happen?
For a few seconds she thinks staring at the sky that with its white clouds and its blue color looks like an oil painting by an inspired artist, then responds:
-I can't pinpoint that, the years don't come in vain, I promise to bring you a photo so that you can get to know him.
The companion can not stop feeling sad at this, but takes the opportunity to change the subject and tell an anecdote that causes thanks and causes both laugh.
From a distance the daughter watches them.
She is the eldest of the four siblings and has taken care of her mother since she began with the first symptoms of the disease that today keeps her in another world.
It's hard to get yourself sometimes with the question. "Who are you?" and understand that your progenitor's neurons are drunk or lack the energy to keep her in the right place at the right time.
Six years have passed since everything began and although they have used the means and medicines advised by the doctor, this has only allowed her to remain static at a point in her life where she is an island that at times anguishes before the deterioration of her health.
He strongly admires his father, that man whose love has had no barriers to stand beside his beloved for almost half a century and who, even with his physical limitations, remains an important part of his care.
Who has disguised himself for a year every weekend as a stranger to make his mother laugh and spend happy moments on that bench in the square.
She admires his patience and strength in the face of the effects that Alzheimer's has left on his beloved and thanks God for being able to have him by his side every day, like the oak that never tires of giving him shade.
Men like him may not be there anymore.

A touching and very well told story, with the elements that manage to give it verisimilitude. Greetings, @joseph1956.

Your post has been upvoted by @Celfmagazine, curation project and art and culture magazine. Learn more about us by clicking the icons below: