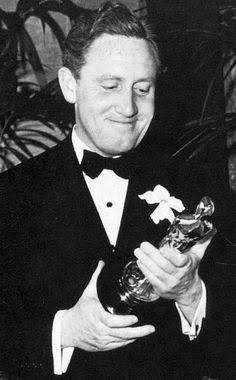 I sincerely wish to appreciate @belenguerra, @writingnreviews & @fendit for yet another amazing contest. You guys have really been very wonderful. For the past few times you guys have been on it delivering your very best to us, so I really want to appreciate your effort.

Spencer Bonaventure Tracy, popular known as Tracy was born in April 5, 1900 in USA. He lived for 67 years old i.e he died June 10, 1967. Tracy was an American actor, known for his God given talent in performing style and versatility. One of the major stars of Hollywood's Golden Age, Tracy won two consecutive Academy Awards for Best Actor from nine nominations, which made him more popular.

Tracy spent several years while he was attending Ripon College where he discovered his talent, and a scholarship was also given to him because of his outstanding performance in the American Academy of Dramatic Arts. In 1930, because of they way he performed in the Last Mile he was able to draw they attention of Hollywood, and as such was signed to a contract with Fox Film Corporation.

Tracy made a remarkable record of winning Oscars twice at a stretch i.e in both 1937 and 1938 for both Captains Courage and Boys Town. He also support they studio to grow and because of that, in 1940 Tracy become one of the studios top stars.

Tracy through out his career as an actor, he appeared in 75 films and had an outstanding legacy among his equals as one of the greatest actors. In 1999, the American Film Institute ranked Tracy as the 9th greatest male star of Classic Hollywood Cinema, within that period.