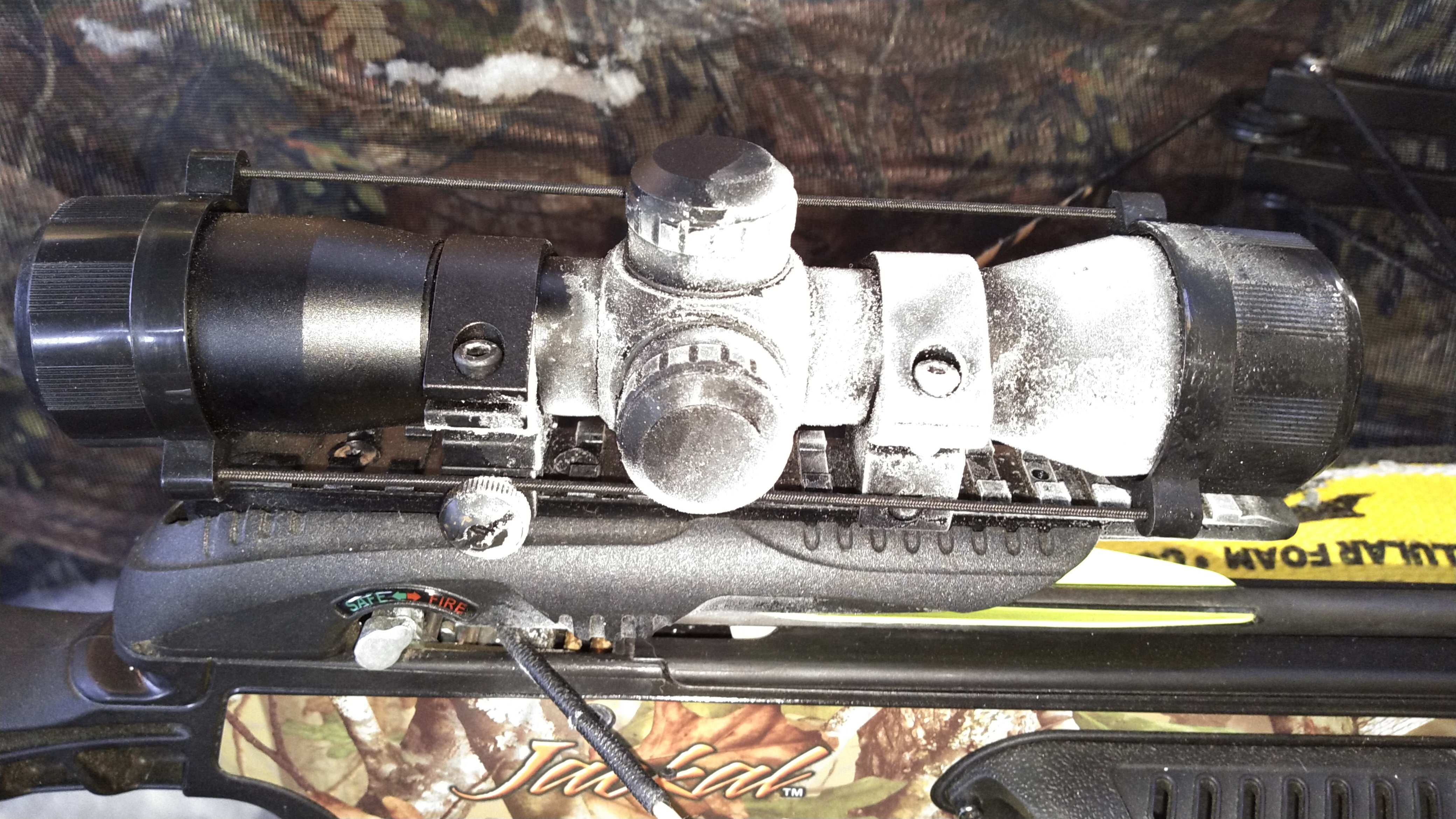 First I'll start off by saying my land is abundant with deer! Every single time I go hunting I see at least one. But normally it's between four and eight.(And as many as 18!) Now, not all of them are on my property and some that are are too far for me to shoot at. Regardless I enjoy watching them and feel I learn alot about, and from, them.

*Picture of my scope while hunting one very cold morning

All that being said, I have taken seven shots since my last kill, I hit one and was unable to retrieve her...Then I missed the next five, making me very sad and question myself. However, being my first year using a crossbow to hunt I found some very interesting information concerning how quickly a deer can react to a sound. I adapted my targeting technique and I made a couple improvements to my hunting stand based on the information I found. And the last one I shot at I hit. Sadly, the deer all but Dodge the dart and I did not recover her. But after five misses, it felt good and I knew I had fixed the problem I was having.

*I EVEN RECOVERED THE ARROW SO NO LOSS OF MONEY.

A DIY MOMENT AT THE HOMESTEAD(USING LEFTOVER MATERIAL)

So, another thing I learned is that it is not recommended to shoot a crossbow without supporting the end of it on something. So, I grabbed a bunch of the leftover 2x4 pieces from fixing my bathroom and some screws and set out on building me a shooting bench in my stand.

I needed a flat surface to rest my bow on while I took shots however none of my leftover pieces were long enough. So the simple remedy is shown in the picture below.

I just butted two boards together and used a third one to screw those two together. Then I attached an "L" shaped leg to each end of it and it came out looking like this.

After building a second one of these for the other side I shoout out of I attached them to one another and then screwed it all to the floor to secure it. To add to my level of organization in the stand I added a few screws to the contraption to allow me to hang my bow up, along with extra clothes and the range finder. It gives me a lot more floor space and it should help keep me from bumping into stuff at bad times. (Noise is your enemy whenhunting.) After it was all said and done I was really happy with the hour I spent making the improvements.

The East property line is in dispute between my neighbor and myself. I believe I own about 180 feet(54 Meters) more then he believes. Since one of the next steps at the homestead will be clearing a site for our home to be placed property, boundaries will have to be set. I have contacted a company to survey it but it is really expensive. I am hoping to recoup the money through selling timber that will be cleared as we prep the homesite and do a little maintenance timbering to help our forests be healthier.(On that note I have found a lumberjack to do this for me)

Thanks again for stopping in and for all those who continue to support my insanity and fun...THANK YOU ALL SOOO MUCH!!!🤗 And until next time I send all my love to you and yours and hope you all have a wonderful weekend!

I know it is somethink for you... But is that realy make sense to shoot animals for fun? Do not get me wrong I am not a vegeterian, I believe this planet has it's own rules, animals eat animals. But even most wild ones rarely kills for fun or even If they do kill for fun... They are just animals. I believe we can do better as human beings.

Who said anything about fun? Did you miss the frozen scope? I have been hunting in temperatures nearing 0 degrees Fahrenheit (thats negative 17 Celsius.)I hunt to feed my family things that are natural and not filled with toxins and additives.
I also raise and kill my own plants that I feed my family for the same reason.
This is also hard work. And not "fun".
Unless you have taken the time to read my posts and actually know who i am, please do not attempt to pass judgement on me.
I wish you and yours the best and I send all my love to you.

Sorry for some people misunderstood your post brother. There's nothing fun when you have family that need's to be feed. Maybe others called it fun because it the contrary, hunting is very fun. But they missed the part that you want to have animals that free from chemicals like in the store.

By the way you have a new rifle or is that a sniper? Maybe the crossbow is good because you retrieve it. But I don't think it will be efficient when the one you wanted to shoot is far.

Anyway I'm glad you're doing fine there. Have a nice day brother and take care.

It's all good my friend. She just probably does not understand but it's okay. and the scope is on my crossbow. I don't hunt with a gun. It's too expensive. and I think it will do good for killing enough deer to feed us. I hope you and your family are doing well friend!

On great professional or archers can shoot without supporting the en of the crossbow on something.

I hope you get one deer soon.

I shoot well holding it too. But it is really a lot easy to just sit the end on something because it's heavy and sometimes you may have to hold it for 30 minutes or more waiting for the perfect shot. I hope I get about 6. That's about how many I need to feed us for a year and not buy any meat. Thanks for stopping in brother.🤗

30 minute? I don't think I can endure up that time waiting for a perfect shot. I had rather take the supporting position. Now I see.

Yeah, and yesterday i had to hold position for over 30.(I was so happy I built the rest) It will make you sore as can be. So to be able to rest is so valuable.

This is really not an easy adventure. I hope you hit one soonest.

Is the property line dispute with the same neighbour that uses parts of your land as a thoroughfare?

I was wondering the same.

There might be some survey marks already placed. I own a couple different pieces of land and if I walked them one could find the old survey marks. Sometimes this is just a metal rod sticking out of the ground or possibly even a tree that is marked.

Yes, I have found three of the four corners.(including our shared ones.) But he still thinks he owns more so i gave to get it surveyed. This piece of land hasn't been surveyed since 1920.😁😁

You guessed it. And he AND his friends have made it a daily habit to drive their noisy ATVs right past my stand because he thinks he owns it.😁😁....I can't wait for this survey to be over.

So the amicable discussions are not quite so amicable anymore?

Well...we speak civilly with one another, but it's obvious to me,he's not happy about me being there.😁 I just want to get along.

Hopefully once the surveying is complete and the boundaries are established with certainty, whichever way they may fall, you can both sit down over a beer or a meal and put it all in the past

Thank you for using the #diy and #buildit tag. This post has been manually rewarded with BUILD tokens in the form of an upvote with our @build-it.curator account. You can buy, stake, and exchange our "BUILD" tokens for steem on steem engine and Steem Leo's exchange

Build-it is a central hub for DIY and How-To projects. It's an opportunity to find and share the latest in DIY, and How-To tutorials. The recommended tags required when creating a DIY article are #diy, #build-it. #how-to, or #doityourself.