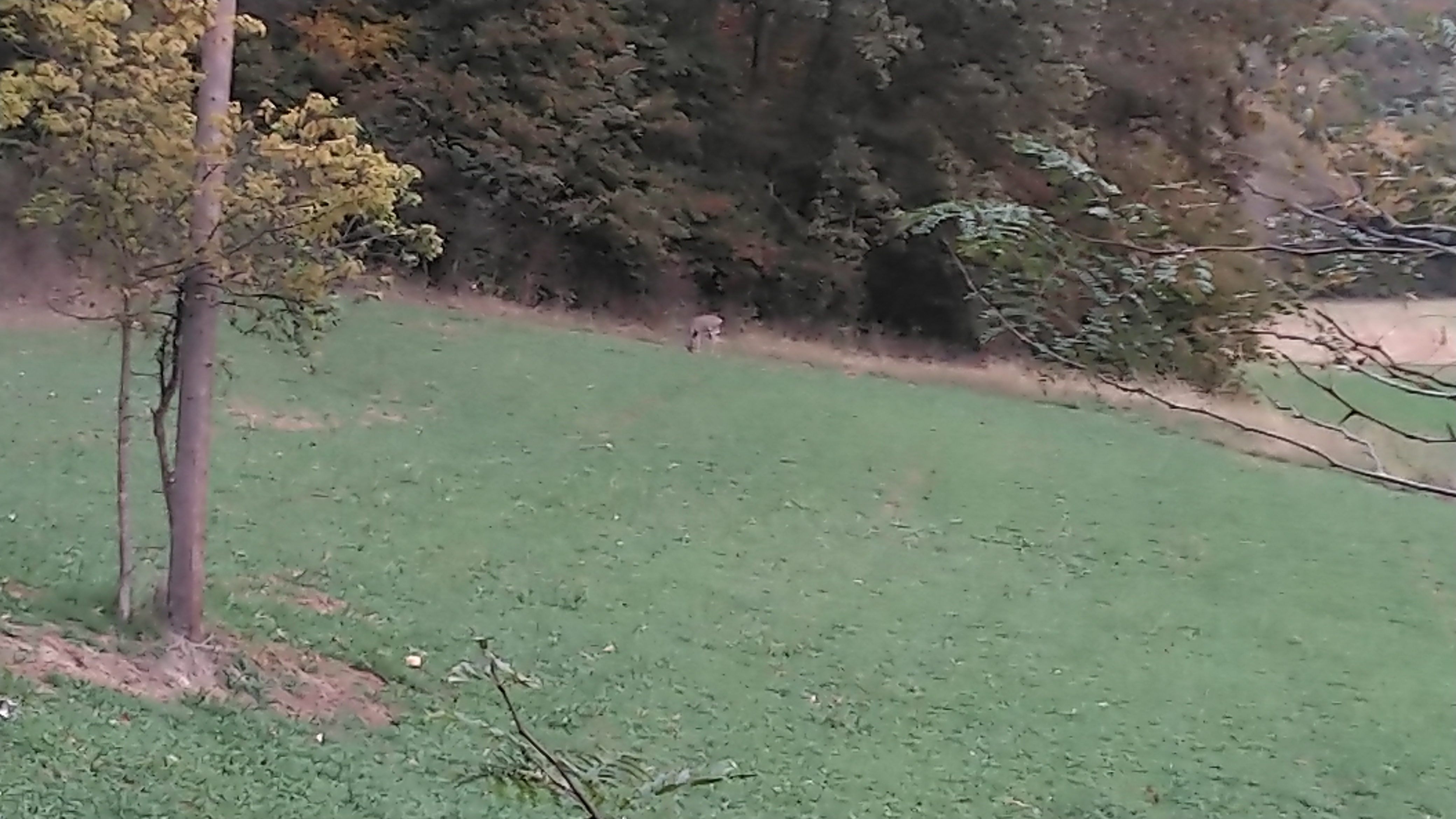 If you look closely in the picture above, you can see the doe that I (soon after this picture was taken) put an arrow through.

She was a mid sized deer and we probably could have got around 125 pounds(56 kg) of food from her. We also have plans for using some the the hides we harvest, to make rugs and blankets.

It was about twenty minutes before sunset when I saw her. She made her way slowly out of the woods, checking for any signs of danger. I was secretly hidden away inside of my hunting stand. With the wind in a direction that favored me as well, she was completely unaware of her imminent, unsafe situation.

I watched her as she grazed the grass in the field, slowly working her way closer and closer to my hideout. Finally after what seemed like forever, she was close enough for a shot. I quietly grabbed my crossbow.(Already drawn with a crossbolt in place.) I removed the site covers from the scope and clicked it on. The lights inside the scope came alive with their familiar red glow.

We are live and ready for a kill. I set the bow into firing position and focused my eyes on the prize. I gently release the safety and softly lay my finger on the trigger. My heart still beats uncontrollably every time i take a shot. But i hold fast, and wait for her to present me a broadside shot. She turns ever so slightly allowing me a glance at her side chest. I squeeze the trigger....

The crossbow twangs, releasing in one fail swoop, all its power to throw the arrow as fast as possible toward the deer. The arrow knock(the very back part of an arrow or crossbolt that is driven by the bow string.) ignites in red as it propelled from the bow. Showing, in vivid detail, the direction it travels as it attempts to hit it's target...Then the dull "thwack" as the arrow penetrates it's intended target.

The deer unaware of exactly what just happened, jumps and takes of in a mad rush toward the woods. It is an attempt to escape any further danger. I listen for minute as it crashes through the woods, as this helps determine the direction it went. And this will aid me greatly as i begin to search for her.

THE SEARCH IS ON## I climbedown out of my stand and made my way in the direction she had entered the woods. The sun had set by now and it was starting to get dark. As I entered the woods, I realized quickly, this was not going to be an easy find. The woods were extremely thick with undergrowth, and it was twice as dark in them then in the field I was hunting...I clicked on the flashlight and began my search for a bloodtrail.

At first, I was at a loss. I could not find the trail and began to wonder if I would retrieve this deer. I was about to give up after a half hour of looking, when I saw this...

I know, you're probably asking yourself, well what is that. I think the next picture will help to explain.

That beautiful red glow was the light up knock on my crossbolt...but there was one problem. It was no longer attached to my deer. Instead it was simply laying on the ground. Somehow the deer had removed it, or it fell out. Maybe it snagged on a branch as she was crashing through the woods. Regardless, this is what i needed as it gave me a place to begin following the blood trail.

And I did. I tracked her for about a mile as it was now completely dark and I was undesirably dependent on my flashlight to continue. After an hour and a half I had exhausted my flashlight, and most of my phone flashlight as well. I stabbed my crossbolt into the ground at the point on the trail I was at....With no other choice, I reluctantly decided to call it a night and come back in the morning to try to finish finding her.

This was not the idea resolution due to the fact rain was coming(it will destroy the blood trail) and coyotes may find her before I get back. And there's always a chance of the meat being bad if I t take to long. NEXT DAY

I got up at around 3 AM with fully charged lights and continued my search. After retrieving my crossbolt I continued on. I found a couple spots where she had laid down an resend before carrying on. At this point I was becoming amazed at how far she had made it. I was also becoming concerned because it was starting to rain, and the blood trail was quickly disappearing. And soon I came to dead end....

This single drop of blood is the last piece of the trail I found. After searching a perimeter of 30 feet(9.1 meters) i decided to wait till day break to look in the woods to hopefully get lucky and find her body. I lay my back against a tree and took a nap until I felt light on my eyelids.

I awoke soaked but refreshed and I searched the woods as thoroughly as I could. She was nowhere to be found. I decided it was a loss for me and headed home. But, in the woods,nothing is wasted. She will die, and a bobcat or some coyotes will have a great meal. The squirrels will chew on the bones for calcium and what's left will fertilize the forest soil....there is no waste, nothing goes unused.

*### Thanks edy for stopping by for another homestead update. I hope you enjoyed the read. I send my love to you all and hope you are doing great.🤗

*All pictures are my own taken with my Kyocera phone.

Umm, this wasn't an easy search. It really gave you a knot to crack. Unfortunately, you were not able to find it.

Yeah, and I've not had any luck on getting another yet. But i have until the end of January but I'd rather not hunt them as it is so cold then.

It sounds like you did all you could to find that deer. It sucks that you didn't but as you said nothing goes wasted in the woods.

Absolutely brother. I wish i would have got her though....as hunting the last week has not went well.😁 I have only taken one shot and missed horribly. Plus i have no chance to hunt this week.(daylight savings makes it dark sooo early.) But hopefully this weekend will be my time to shine.

You can refer to the Doe as "It" or "That" so that it won't be hard on your emotions when killing it especially if that kind of food had escaped along with your arrow :D
@johndoer123

Hard on the emotions...sure.😁
Food in my belly overrides my emotions brother. I don't care if it's a boy, girl or transgender deer...I'ma gonna kill and eat it.😂 And while o did retrieve my arrow...it was broken and not usable.😭