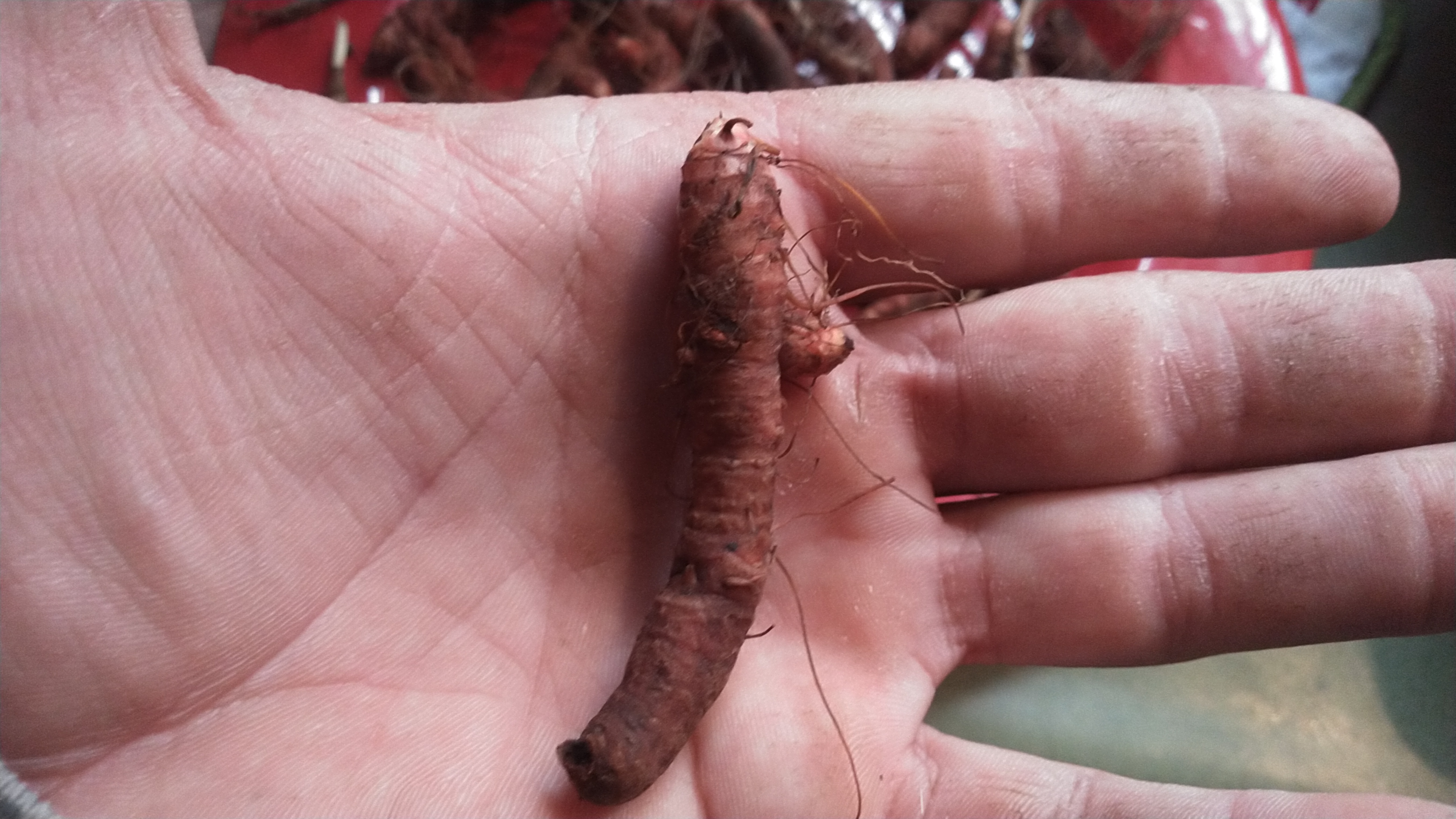 This post was made with love for, and is my gift to, a dear friend.

A GARDEN MADE BY THE SOURCE

At the homestead we have a great variety of plants...all naturally occurring and maintenance free. And many of them are usable as either a food source or medicinally, and quite a few are good for both.

I will spend a little time today going through a few of the plants that we have. I will begin with the low lying ones today and will try to do a post in the near future for our gardens of shrubs and trees.

THE ROOT OF THE MATTER

Let's begin with the deliciousness that exists below the soil. And that being said look here...

The above is Bloodroot. It is an amazing little plant that has a few uses. Here is an excerpt from Rxlist.com...

Some people apply bloodroot directly to the skin around wounds to remove dead tissue and promote healing. During the mid-1800s, bloodroot extracts were applied to the skin as part of the Fell Technique for treatment of breast tumors.

In dentistry, bloodroot is used on the teeth to reduce the build-up of plaque. Plaque is a film of saliva, mucus, bacteria, and food particles that can promote gum disease.

I had a couple soars on top of my head that hadn't healed in over a year. I never went to the doctor to figure out what was up, but after just a few applications of the juice from their roots the spots are almost completely healed!

This little beauty with it's heart shaped leaves is easy to pick out amongst the other low lying foliage and is a great addition to any medicine bag. For an idea of it's many possible uses check out this quote from stolaf.edu

Wild Ginger has been employed by various Native American tribes for a variety of purposes. When infused in a tea, Wild Ginger was used as a contraceptive. The plant was a popular carminative and used to relieve generally upset stomachs. It was also used to treat intestinal ailments, and relieve stomach aches and cramps, as well as indigestion. Wild Ginger was used to treat colic as well, leading to another of its many common names: Colic Root.

Pioneers used Wild Ginger to treat open wounds. The roots contain antibiotic substances that when chopped up on a plantain leaf, could serve as a poultice used to treat inflammations of the skin. This remedy was apparently used by Meriweather Lewis during his exploration of the Louisiana territory in 1806. The plant was also used by pioneers to treat chest complaints and heart palpitations, promote sweating to break a fever, as a tonic, and as an appetite stimulant.

Wild Ginger contains aristolochic acid, which was once believed to be effective in treating tumors. Aristolochic acid was a main component in many dietary supplements and over-the-counter medicines.

However our U.S. government now says the plant is poisonous(imagine that) so if you believe in government looking out for you, you may want to steer clear of this one.😁

Jack in the Pulpit

THIS ONE CAN BE POISONOUS!!! USE CAUTION. But the root(it has the shape of a turnip, but I've not picked any yet as they are not ready) if dried for a few months and then cooked, will lose its poison and become a delicious chocolate tasting food source. They really are yummy!!! Let's look to altnature.com for a little more information...

Jack-in-the-Pulpit root is used in alternative medicine and is edible (only after drying and cooking) The fresh root contains high concentrations of calcium oxalate and is considered to be too dangerous and intensely acrid to use. Roasting the root after drying it 6 months removes the acridity. In this way Native Americans peeled and ground Jack in the Pulpit roots to powder to make a bread, which has a flavor similar to chocolate. Gather roots in early spring and dry for later.

Caution is advised as ingesting the fresh root can cause poisoning and even death.

WARNING: Raw corms are not edible and contain calcium oxalate which will cause a burning sensation in the mouth.

The roots can be cut into very thin slices and allowed to dry for several months, after which they are eaten like potato chips, crumbled to make a cereal or ground into a cocoa-flavored powder for making biscuits and cakes. A starch obtained from the roots is used as a stiffener for clothes.

Jack in the Pulpit root is acrid, antiseptic, diaphoretic, expectorant, irritant and stimulant. A poultice of root used for headaches and various skin diseases. Ointment used for ringworm, tetterworm and abscesses treatments.

Our next group of plants will all be lower level plants that grow to a height not much above the ground level in our forests.

This amazing plant has one specialty that anyone that spends any time in the woods can appreciate...it will eliminate the effects of Poison Ivy(and others like Sumac and Poison Oak)!!! And the amazing thing is that Jewelweed always grows near Poison Ivy. So if you find yourself in misery from that itchy weed, just backtrack until you find the Poison Ivy and look around, normally the solution to your problem, will be found near the problem.😁

A plant of many uses. From food to medicine this plant is a superstar! Wildrosecollege.com has an excellent amount of information concerning it's used, so let's check out see quotes from their site...

This plant has a starchy rootstock that may be eaten. It should be cooked overnight in lye. The Ojibwa Indians used white ashes from their fire pits instead of lye. This removes the bitterness. The roots are then boiled and rinsed several times to remove the lye. The rootstock is also said to make a good pickle. Porslid lists this plant as non-edible. It is not listed as poisonous either to livestock or humans though it tends to be a purgative.

The young leaves and shoots can be used like asparagus and are good pot herbs. The berries are edible raw, but purgative if eaten in quantity. Anyone with loose bowels should not eat them. Cooking these bitter-sweet berries removes much of the purgative element and also makes them more palatable.

Moore lists S. racemosa roots as an effective demulcent and expectorant for inflammatory stages of lung infection, sore throats and to soften up mucus in the bronchials. He also adds it is good for frontal headaches associated with indigestion.

The Blackfoot used to powder the root and apply it to wounds. The Nevada Indians used the roots as a poultice for boils, sprains or swellings. The pulp of the root was sometimes used for earaches, as an infusion for eye inflammations and for regulating menstrual disorders. The Nevada Indians also used a tea of the leaves as a form of birth control (drinking one cup daily). Other Indians used the root to close up wounds by laying bruised roots on the wound for a couple of days. The roots, made into a decoction, are said to relieve sunburn. Inhaling the smoke of roots was used to treat “insanity” and to quiet crying children.

S. stellata roots were made into infusions to regulate menstrual disorders and as a form of birth control (conception is said to be prevented by drinking tea of the leaves regularly). The berries are high in vitamin C and help to stop scurvy and rickets.

Probably my favorite of all our natural garden splendors. And I know of no medicinal uses other then the fact that they are so healthy for us because they are loaded with antioxidants, vitamins and minerals with very few calories...so we just eat them. Raw or cooked they are delicious!!!

WARNING!!! ALL BUT THE FRUIT OF THIS PLANT ARE POISONOUS! But the small fruit that develops between the leafs is delicious and can be eaten raw or made into candies or jelly. With the above warning in mind it is well known by many that the leaves contain Podophyllum that fight unwanted cell divisions...i.e.--cancers and warts. Podophyllum is used today in some countries by doctors to treat certain types of cancers and genital warts. So maybe some day American doctors will more widely accept it.

Well the plant is pictured above...but there are no berries yet as it is to early in the year for them. But the berries are not the only great part on the plant. For more information concerning the other parts of the plant we can look to sagewomanherbs.com for some more interesting facts.

The leaf helps clear heat, reduces inflammation, cools fever, and dries dampness. It is of benefit in cases of anemia, bleeding, cholera, diarrhea, dysentery, fever, gout, hemorrhoids, and infertility. The berries are considered to be a blood-building tonic and are beneficial in cases of anemia. With their antioxidant content, they are also a powerful anticancer and antitumor remedy. They also can be made into a delicious syrup to alleviate diarrhea in children. The root bark is considered to have the strongest medicinal action. It can be used in treatments for diarrhea, dysentery, internal bleeding, and leukorrhea. Topically, blackberry leaf is used as an astringent for oily skin, to treat wounds, as a mouthwash for sores and weak gums, and as a gargle for sore throat. The leaves can be applied as a poultice to relieve the pain and itchiness of insect bites and to shrink hemorrhoids.

OF COURSE THERE ARE EVEN MORE

But I have not been able to photo document all of them yet, and will as I have the opportunities. So look for more garden updates in the near future.

@Simplymike, this is my best gift I could think to make for you and I hope it brightens your day a bit and maybe even brought you a smile. From my family to yours, we send all our love.🤗🤗🤗...and of course a few huew hugs.
** All pictures are my own taken with my Kyocera phone.

are you growing blackberries or any form of berries anywhere (yet) ?

Hi John! How are u? These plants are wonderful! Have a great day!