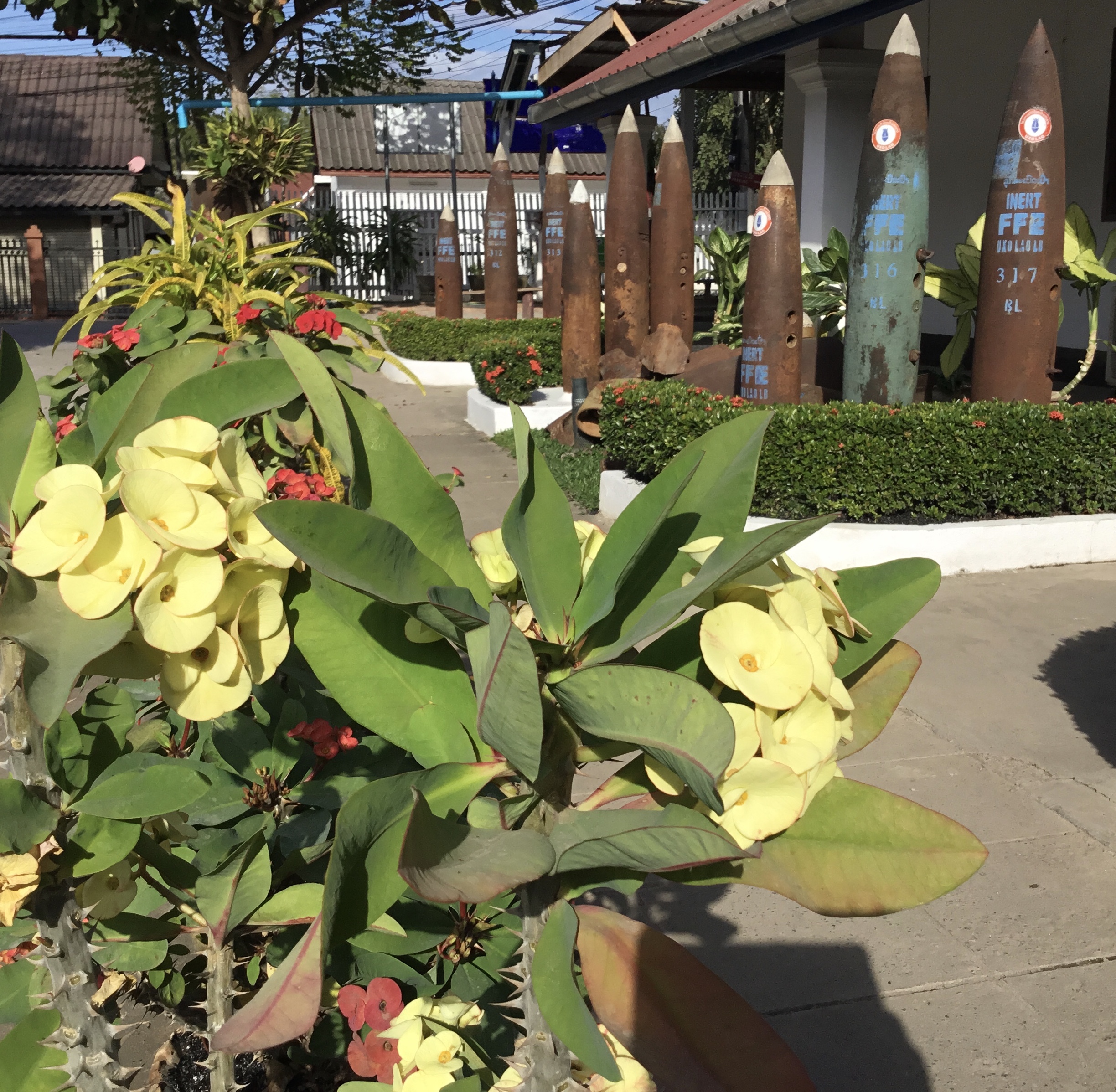 It is free to come here. They ask you to watch a sad video showing President Kennedy promising no war then US forces dropping more bombs per capita than anywhere ever.


Here is President Kennedy saying that we want peace in Laos not war. If he had not been killed, I believe none of this would've happened.
They'll show you a 24 minute video like this one showing the victims of the bombs. It was really sad to see the kids who got hurt. I grew up on an airport in the 1980s so many of my heroes, the old pilots who were in the Air-force and CIA, were the ones who dropped these bombs. I told the ladies that I was sorry my government did this to them. They appreciated my apology I think. Saying sorry is something America does far too rarely.

The UXO is behind this park:
Souphanouvone Park

🌺 Flowers 🌸 can make even bombs look good. I love how Lao people took something so negative and made it into something positive and informative.

Ben really liked it here and wanted to know the solution to cleaning up all the cluster bombs which they call bombies which still kill people today.

Ben posing by the cluster bombs.

Some kids will mistake these bombies for fruit or rocks and play with them. Many children are losing their limbs and lives today because of this horrible technology.

The bombs are made of good materials from the 1960s, so they'll melt down the metals and make useful things rather than weapons that wait decades to kill farmers and kids.

I told Ben that President Obama had come here. He did visit the UXO in the capital, Vientiane, and Luang Prabang, but not this UXO museum. Ben is from Kenya, so Barack Obama is his hero. After this we drank some whiskey and went bowling. We met a Nazi lover from Switzerland which was interesting. I asked him if we could do an interview for my Youtube channel, but he said he would be arrested in his country for his Anti-Semitic opinions. Youtube would probably take it down anyways. I hate how people say crazy shit, but when it's time to say it on camera, they find excuses for not showing their faces.

Our grandfathers in World War II had better EOD equipment. Sometimes the bombs can sink six meters into the mud and wait to kill. I think we spend way too much time playing nonsense video games and should be spending more time controlling drones and bots to fix problems.

I saw this affiliate marketing ad selling these RC construction toys on Facebook and I thought they should make this a controlled online streaming video game.

They could be big or small. When we get truly high speed internet globally for free anyone can control these UXO Bots and kids or volunteers could start digging up the bombs and clean this mess up in a decade rather the the 300 years they think it will take using current EOD methods. If these remote control digging toys get blown up, it will make for funny videos rather than risking human EOD heroes's lives.

There are a lot of different weapons and bombs on display here. I found it interesting that the US Army still use some of these weapons and explosives to this day.

Ben is pointing to our location, Luang Prabang, on this map of the bombed areas. At least Uncle Sam had a no bombing temples rule. A few mistakes were made in the fog of war and some temples accidentally got bombed.

A Japanese NGO donated this mine sweeper to them. This looks very expensive and may still be dangerous for the operator. Many of the bombs are in heavily forested areas with trees, so using small UXO Bots would be make it easier to find more. I will do my best to start selling these toys via affiliate marketing and will donate some to the UXO and see if my idea works. I think four bots would be good. Two could have go-pros attached and the one doing the digging will have to be modified to have HD cameras and able to be controlled online.

I took these pictures with my iPad Pro (1st generation) on December 30th and January 1st at around 14:00 with the sun at my back.