A Million Iraqis Ask US to Leave. Response is Plan to Build 3 New Bases in Iraq! 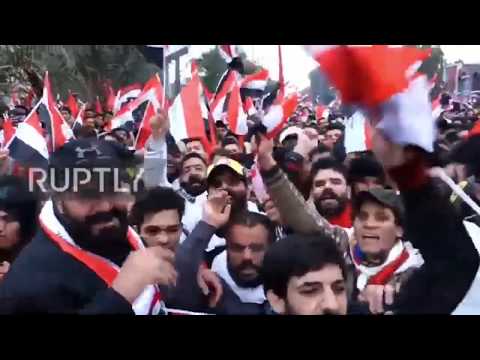 Last Friday, on January 24, over a million Iraqis poured into the streets of Baghdad to protest US military occupation of Iraq and demand US troops go home. Of course the western media downplayed the significance of the demonstration, by claiming there were only tens of thousands or hundreds of thousands of Iraqis marching, but drone footage and attendees put the actual number well over a million, with estimates of up to 2.5 million, and there were Iraqis demonstrating in cities all across the country, not just in Baghdad! It was reported that demonstrators packed a length of 8 km of road as they marched.

The increased pressure to force US troops out of the country follows a 170-0 Parliamentary vote to expel all US coalition forces from the country early in January, after which Prime Minister Mahdi formally requested the US begin making withdrawal plans.

This recent push to eject US forces from Iraq was sparked at the turn of the year by a week-long series of unprovoked US air strikes against Iraqi military sites and targets; beginning with a large-scale attack on five remote Iraqi military sites along the Iraqi-Syrian border that killed over 30 Iraqi fighters whose sole job was fighting ISIS; and culminating in the assassination of top Iranian General Qassam Soleimani and deputy commander of the Iraqi Popular Mobilization Units (PMU) Abu Mahdi al-Muhandis, in a drone strike on the vehicle they were traveling in at the Baghdad airport, as Soleimani was arrving on
a Diplomattic mission Trump had approved and then used as a trap to carry out the Israeli-orchestrated killing.

The Iraqis are rightly angry, for dozens of their comrades have been killed by the US without any justification, for no reason except to fulfill the wishes of the Israeli regime and provoke a war with Iran. Not only that, Israelhad already carried out a string of attacks against PMU positions over the last several months with US approval, utilizing US control of the Iraqi airspace to launch their attacks against the Iraqi military targets in the name of fighting Iran.

At the beginning of month, following the offofficial request by the Iraqi government to begin drawing up withdrawal plans, the immediate US response was that troop withdrawal was entirely off the table and would not be discussed. Naturally, such blatant disregard for Iraqi sovereignty and the demands of its people only fueled the anti-American sentiment, and led to the most recent protests.

And what was the US response to this increased pressure to force a troop withdrawal, which demonstrated such demands were truly popular demands backed by the people? Well, a plan to build three new US military bases, of course, all very close to Iran, one just eight miles from the Iranian border in the town of Halabja! And that’s not all, they are also seeking to move Patriot missile defense batteries into Iraq at the same time, Defense Secretary Mark Esper announced on Tsday.

“The plaplan to build new bases will be seen in Iran as an attempt to tighten the noose around it morightly,” Alan Ma Macleod wrote for Mint Press News

The move to establish three new U.S. military bases on Iran’s borders will not be a welcome move to those who wish to deescalate tensions, least of all by the Bulletin of Atomic Scientists, who moved their Doomsday Clock to just 100 seconds to midnight, citing a possible regional nuclear catastrophe as a factor.

Indeed, if anyone thought the President’s step back from the brink of war was anything other than political gaming, and was actually part of any long-term plan to de-escalate tensions in the region when he chose not to respond militarily to the the Iranian missile strike of the largest US airbase in Iraq carried out as ‘revenge’ for Soleimani’s assassination, they were dead wrong.

Iran has already said the real revenge will be the expulsion of US occupation forces from the region. The US is making it clear they have no intention of making that an easy task, and that they have every intention of continuing to escalate tensions back to the brink of war once again.

Coming at a time when Iraq is pushing the US to leave, and tensions are still high from Soleimani’s assassination, this plan to build new bases and the intention to move Patriot missile defense systems into Iraq means only one thing, that US is actively working against de-de-escalating the building tensions in the region, and is again preparing for a war on Iran, just as they were before.

This latest response to increasing Iraqi pressure to withdraw US forces also further illuminates the underlying reason behind such a staunch initial refusal to consider such a troop withdrawal, and why the US is so determined to keep a military presence in Iraq in the name of fightingIS, despite ISIS already “10“100% defeated” according to the President, and clearly no longer a threat too big for the Iraqi security forces to handle on their own.

That reason is clearly to increase pressure on Iran and continue the march towards war with Israel’s arch-enemy. And since it is has now been publicly admitted by Trump and Netanyahu that everything Trump has done to pressure Iran and put the pieces in place in preparation for a war on the country was all done on behalf of Israel, it is reasonable to concludrump is also crankinging up the heat in Iraq for Israel as well.

At the recent ‘deal of the century’ White House ceremony on Tuesday, the two leaders were bragging about everything Trump had done for Israel - including withdrawing from the Iran Nuclear Deal, increasing pressure on Iran, and even assassinating Soleimani. At the same time, an Israeli security official told Al Monitor that there was “no worse scenario” than a US troop withdrawal from Iraq, “for Israel’s national security.”

Iran is clearly the factor keeping US troops in Iraq against the will of Iraqis, and Israel is the reason. Because staying in Iraq does not serve US interests in the slightest.

As Benjamin Netanyahu has put it:

“I know what America is. America is a thing you can move very easily, move it in the right direction.”

The last precision Iranian missile strike on a US base in Iraq didn’t kill any Americans, but the next one likely will. The last Iraqi popular demonstration against US occupation forces was a peaceful march. The next one could easily be a deadly attack. As the Iraqis, Hezbollah, and Iran have all threatened, if US troops do not soon begin coming home voluntarily, they will be sent home in coffins. One way or another, the US occupation of the region will be brought to an end, and US troops will be forced out, just as they were forced out of Iraq the first time around.

The Iraqi protesters have given us plenty of warning, and I for one wish our government d listen, and tak take our troops out of harm’s way, off of lands that are not theirs, and out of countries that do not want them there.

It’s high time American lives stop being put at risk to fight Israel’s wars. It’s time Trump make good on his promise and bring the troops home from Iraq and Syria, before they start coming home in coffins.

"And since it is has now been publicly admitted by Trump and Netanyahu that everything Trump has done to pressure Iran and put the pieces in place in preparation for a war on the country was all done on behalf of Israel, it is reasonable to conclude Trump is also cranking up the heat in Iraq for Israel as well."

I'm curious where you found that information? I haven't been paying close enough attention but that seems very important to know.

During the unveiling of the deal of the century at the White House last Tuesday. I reference in my post on that: https://goldvoice.club/steem/@jasonliberty/the-farce-of-the-century-trump-and-netanyahu-unveil-long-awaited-palestinian-peace-plan

You can hear the comments for yourself in the video of the event below:

Trump touted the moving of the US embassy to Jerusalem, recognizing Israeli sovereignty over the illegally occupied Golan Heights, and withdrawing from the Iran nuclear deal as things he had done “for Israel”.

Netanyahu repeated this list but added the US endorsement of illegal West Bank settlements, increased pressure on Iran (probably meaning the sanctions campaign), and the most recent assassination of Iranian General Qassem Soleimani as things Trump had done for “the Jewish state”.

Ahh, thank you, Jason. I hadn't watched that video yet, but it looks like I'm going to have too. That's pretty obnoxious and, quite frankly, surprising that they're openly admitting this kind of stuff.

Welcome to the vomit comet, round 60!

I know that it may take them a very long time to reach the end of that path. It may even take them a very long time to get to the beginning of that path. But if the Palestinians are genuinely prepared to take that path, if they’re genuinely prepared to make peace with the Jewish State, and if they agree to abide by all the conditions you have put forward in your plan, Israel will be there. Israel will be prepared to negotiate peace right away." — Netanyahu

Little known fact, in the bible the notion of suing for peace can accurately be compared to begging, bribing and or offering yourself in servitude as a slave in exchange for not getting murdered. So if that remains the "Jewish State's" notion of what peace is, then peace is nothing more than concessions to Israel until it is again reconquered because it doesn't know how to play nice. Historical matters aside, it doesn't at all make sense for them to continue to occupy the territory because they are a splinter in a largely Muslim area.

In the future when "God" gifts real estate to a peoples he should at the very least make sure the land is vacant prior to doing so. Sorry if my agnosticism is shining through, but I wouldn't buy into any of these modern-day monotheisms if they were given away to me freely with cash in hand to boot. Eris is one of the true Goddesses (the evidence is abound) and her existence is both as meaningful as it is irrelevant.