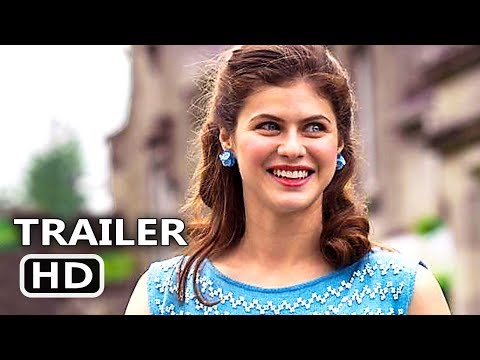 We seem to be in a mini-Shirley Jackson revival, so it’s not surprising that someone decided to make her second most famous novel into a movie. It was a nice idea, but ultimately an unsuccessful effort.

I read We Have Always Lived in the Castle so many years ago that I only recall the major plot points, not many of the details or characters, in a Gothic story about the poisoning of almost an entire family. What “horror” there is in the story is mostly internal and psychological, which makes this novel extremely difficult — even pointless — to film, if you’re trying to remain strictly faithful to the book.

The director, Stacie Passon (mostly known as a TV director for series like Amazon's Transparent), gives it the old school try, but it’s like trying weave a cape out of spider silk. To make a more compelling drama, the script would have had to make major adjustments to the way the story is told. Which it doesn’t do. There’s just not much to go on, making this movie a dull, irritating mess.

The Blackwood family has lived in a limestone mansion -- resembling a castle -- in rural New England for generations. One evening at dinner time, most of the current family members die after consuming arsenic-laced sugar with blackberries. The only survivors are two sisters, Merricat (Taissa Farmiga, younger sister of the more famous Vera) and Constance (Alexandra Daddario), and their Uncle Julian (Crispin Glover). Dead are the sisters’ parents and brother, and Uncle Julian’s wife. Merricat, then a child of twelve, did not attend the fatal dinner as she was being punished. Uncle Julian is handicapped from the effects of the poison and is confined to a wheelchair.

All of this occurs six years in the past, so we don’t get to see the poisoning or any of the fall-out, in which Constance is accused of the killings by the police, although they couldn’t make the charges stick. We only know of it through dialogue and brief flashbacks. It would have been a much better film all around if they’d started with the murders and the police investigation. Instead, we get nervous, shaky ephemera about these very strange girls’ lives, which gets increasingly tedious down the road.

As the film opens, Merricat is eighteen, Constance is in her late twenties, and Uncle Julian is an invalid. Constance is severely agoraphobic and can’t leave the house beyond the gate of its large garden. Merricat does the shopping in town but hates it, as the villagers despise the surviving Blackwoods and believe Constance guilty. Merricat also practices witchcraft to protect the remaining family from ill-intentioned outsiders. We never know what income they are living on, but there are hints of a large safe full of silver coins left by the girls' father.

Merricat sees signs that her spells are failing when a book drops from a tree. Shortly afterward, a cousin named Charles arrives unexpectedly for a visit. Charles romances the lonely Constance, and convinces her to let him move into the house. He is clearly a golddigger with designs on Constance. Merricat despises him and tries to scare him into leaving.

This sets up the climax of the story, which is dramatic in the book but kind of boring in the film. At the point of the climax, Merricat confesses to her sister that she was the one who poisoned the family. She tells Constance that she was confident that Constance would not be endangered, because she knew the older Blackwood girl did not like to sugar her berries. Constance basically says "okay, I knew it was you all along," to this astounding revelation. (In the book, which is narrated by Merricat, this revelation is a "twist" that comes out of the blue, because up until then, the reader doesn't realize that Merricat is an extremely unreliable narrator.)

This film is crying out for shadowy, Gothic camera angles, like the kind you would find in Jack Clayton's The Innocents (1961) or Robert Wise's The Haunting (1963). There is no sense of creeping dread, no build-up of suspense. There is little effort to make the house appear creepy or bizarre, which is a major mis-step, since the house is actually kind of a character of its own. In addition, Merricat just isn’t very sympathetic as the major character (I’m trying to remember if she was this unsympathetic in the book). She looks, acts, and dresses like a spoiled child. The other two surviving Blackwoods are very weird, but not in a good way.

Performances are okay, but just that; the cinematography has that trite, overly-sharp, “filtery” look that most digital films have today.

This film is skippable. It didn't get a major release, but instead it debuted at a film festival, and then went straight to streaming. However, if you’re interested, it’s streaming on US Netflix right now.

I actually rather liked it. (Quite enjoyed the book too.) Nothing earth-shattering, but well done with a stylish 60s feel.

I thought the twist-reveal was rather flat, but I did like the way it put the characters into new perspective. Merrikat was rather mopey and unsympathetic, I suppose, but I definitely felt she was the put-upon victim for most of the story. And Cousin Charles, who was a pushy "Mansplaining" douchebag for most of the film, and who lost control at the end--well, maybe, just maybe, he could have been Constance's only chance for happiness.

I can also relate to the story of a once-noble family in decline, wealthy ancestors who were for the most part bastards, and a couple of women clinging to the only life they've ever known well past the time it's time to move on. Merrikat and Constance are a good deal like my mother and grandmother, actually, and sometimes I fret about what my sister might be getting up to all alone in her attick apartment...

The basic story is good, but it could have been filmed SO much better. It's the difference between a master filmmaker like Wise or Hitchcock, and a journeyman TV director.

Sorry to hear about your sister!

Hello @janenightshade, thank you for sharing this creative work! We just stopped by to say that you've been upvoted by the @creativecrypto magazine. The Creative Crypto is all about art on the blockchain and learning from creatives like you. Looking forward to crossing paths again soon. Steem on!