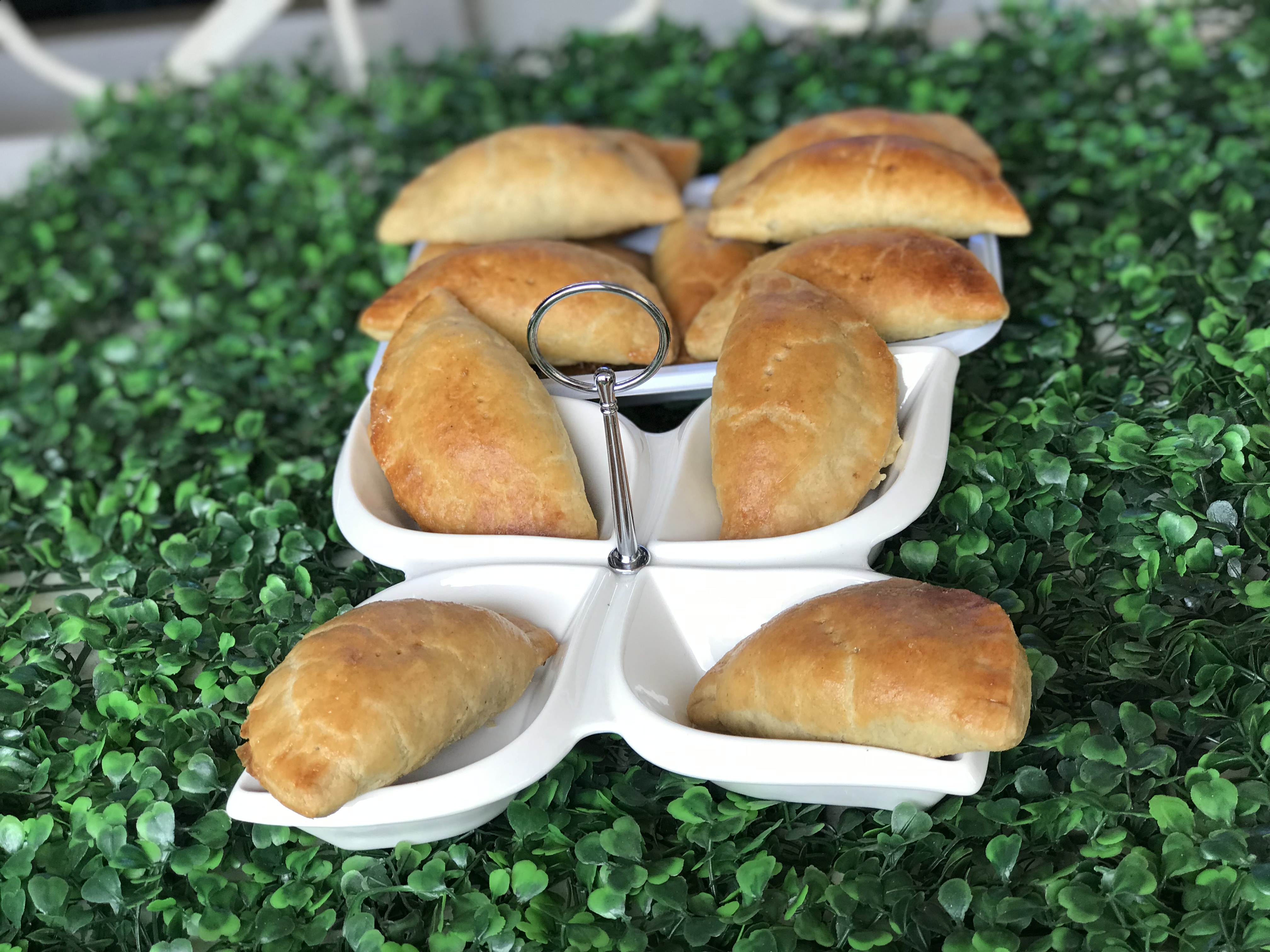 Kindly receive warm greetings from me, good people of the steemit family. Am extremely happy to have another opportunity to share my dairy game with you all.
Thank God for a new day! i woke up today at about 6:am and realized my mum had been up already as the light in her room was on. I went to greet her and found her doing morning devotion so i joined her in praying.
After the prayers, i left her room to change, when i was done, i went into the kitchen to prepare fish pie that a client had ordered through a friend’s recommendation, she is based in Yaoundé and only came to Bamenda for a contest. I started by preparing the filling and allowed it to get cold while i mix the dough, after that, i rolled out the dough and cut into pieces using my cutter and put a table spoon of filling each, when i was done, i arranged the pies in the oven and proceeded to pilling off bananas to make banana cake for a family friend; father Bonaventure Ndong who loves banana cake a lot . While i was doing the mixture, i kept checking the oven from time to time because with baking, you ought to stay alert, your pies might get burnt totally if you get distracted and forget to check and regulate the oven regularly.

checking the pies in the oven

My banana cake has seven main ingredients; ripe bananas, flour, salt, baking powder, ground nut oil, cinamon and bicarbonate, i didn’t add any sugar in it because Rev. father prefers it when it is sugar free.
By 10:am, the pies were ready although i was late because i had agreed to give the girl at 9:30am. She kept calling over and over so i had to plead with mum to regulate and check the oven for the banana cake while i deliver the fish pie . I had to meet her around the transport office at up station since it is her first time coming to bamenda so she doesn’t know any place in town apart from up station where her contest was taking place , I had my bath and took some left over egg roll from yesterday and ate as breakfast, when i finished eating, i left the house for up station, on my way there, i had to take a picture and send to her so that she could relax and be assured that i am on my way. I got there by 10:30 and gave her. Five minutes later, she wrote me on WhatsApp to express her satisfaction and her desire to have some more the following day to travel to Yaoundé with, i felt happy because although i delivered late, the taste of it changed her mood completely.
Taking Breakfast

On my way to deliver the fish pie

On my way back, i remembered i still had some pies that were left , thank God i had taken a picture of it separately so i immediately put it up on my status, in less than ten minutes, I received payment through mobile money from one of my viewers who always orders from me, luckily she knows my house since she always comes to collect pies so i sent her her to collect and she did.

By 12:pm, i was home, thank God mum had assisted in checking the oven and the banana cake I left was ready, i took a few pictures of it and proceeded to the cathedral to give Father Bonaventure who is now the principal at the secondary school in the cathedral ; Saint Joseph’s Catholic College Mankon. I got there by 1pm, he was standing outside with other teachers discussing, most of whom were my teachers in Saint Bede’s College Ashing Kom, they were all surprised and happy to see me. I was equally excited to see some of them after a long time with the crisis and all of that, Father told me to go to his office and wait for him while he concludes with them and join me.
Banana Cake

Waiting for Father in his office

When he came in, i handed his parcel, he was so happy, banana cake has always been his favorite snack since i knew him. He kept his parcel aside and we had a long discussion for about an hour. Father was my principal in secondary school, he was a mentor and dad to me in school and even now. In fact, he contributed a lot in shaping me into the woman i am today, when we were done talking, we rounded up with a short prayer and by 2:30 i left for the house.
By 3:pm i was home already, there was a funeral ceremony in the neighborhood of a young boy of about 30 years who had been killed mysteriously in doula last week. So i went there to greet and condole with the family and although i do not know them personally, i was warmly welcomed by them.
With my Cousin at the Funeral

By 6:pm, i was back home, my niece came into my room for assistance in doing her homework that took us about 30minutes, later on, we left the room to the parlor to eat. Mum had prepared fufu corn and vegetable which we ate and i went back into my room to rest before coming back only to wake up in the morning.
Thanks for your patience in reading through
Kind Regards!
Cc:@fombae
Cc:@saxopedia
Cc:@njiatanga
Cc:@thegreens

Great write up. I do baking and other things like making ice cream and chocolate cream or yogurt but never tried making banana cake before. Thanks to you Mary I can use your recipe to do something. Your bakings look yummy and the pictures are clean and good. Sorry about your neighborhood friend who kicked the bucket, you must be a good neighbor to console with his family.

this is just an excellent and a great write-up @jane-mary. Its a heavy post. I love the balance your day has. It cuts across the spiritual, moral, social, financial, in short your a real mother in the making. And i also wish you the best in your career. I guess Bakery and food processing will be good for you in the university. Love those pies really. especially when they are baked so be rest assured to receive my own command in the days ahead

Thanks a lot dear, i will be waiting for your order, pls feel free to contact me at anytime when you want it .