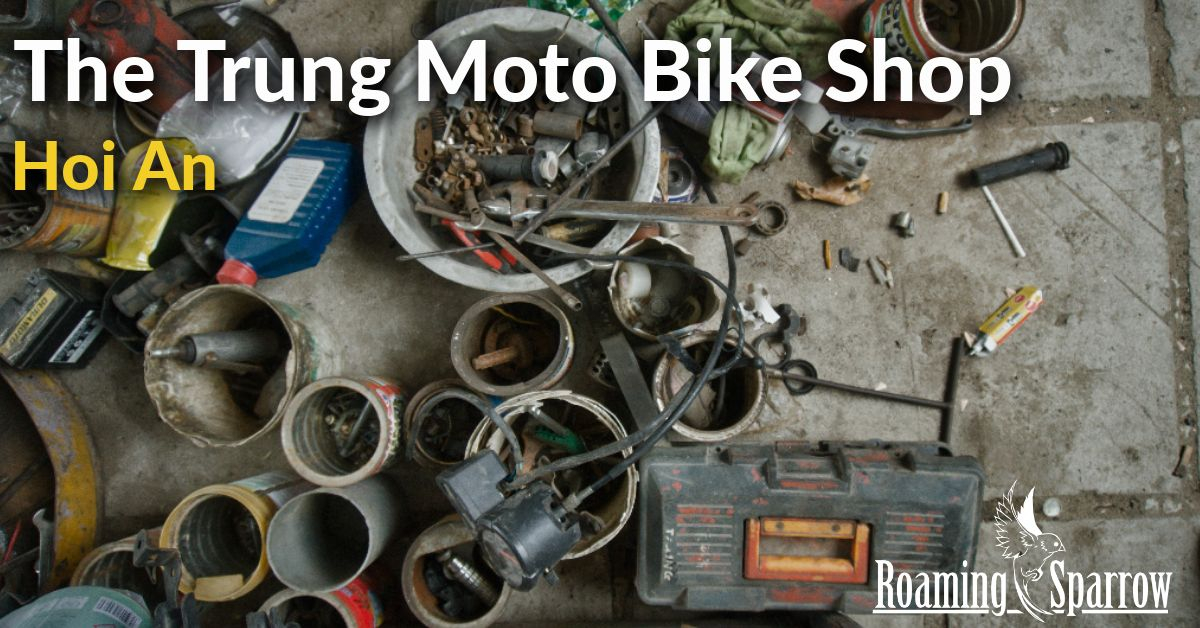 Well, about a week back I bought a motorbike here in Hoi An. Its an (I think) a 3-year-old Honda Wave A (Alpha). I did some reading and should have done more. I read one post that said the Alpha version was crap, but I don't know these things. Perhaps it was just a lousy bike that the author had?

The person selling the Wave A I bought is a friend of the vice president of the English Langue School that hired me. Given this, I just assumed that the bike would be of decent quality, run like a charm, and be a win. :D If only things were so easy, right?

I should say that my bike riding experience was limited to one time in Indonesia and then a few days before this zipping around on the OLD Nuvoe motorbike at the place I am staying. Both times these bikes were full automatic transmissions.

Back to the story:

The bike I bought is a Semi-Auto bike, meaning you have four gears you click threw with your left foot. Pro-tip, if you buy a motorbike and you never drove a Semi-auto bike, the place to learn is NOT outside the dealer with people point and laughing as you cant drive a motorcycle. Then teaching you in a dialect, you don't understand. Lol. Pro-tip two, if you never bought a motorbike, its a lot simpler then a car, but bring along someone that knows about bikes.

Fast forward, I learned how to operate the bike. The VP of the langue school taught me that night on a back street in the Rice Fields. With this knowledge, I picked up the bike the next day and was on my way. The first trip was to the Hidden Mural Village. When I got back from this, I was at the Dingo Deli in Hoi An, when pulling out the breaks snaped. Hahahaha, it's not funny.

The person I bought the bike from came the next day and fixed it. I was unhappy as the bike was still not working well. I wanted to sell it back to the original person. But, he said he would take it back for less than I bought it.

Not really loving that idea (In hindsight I should have said yes) I went looking for a bike shop and found one, the Trung Moto Bike Shop. Puling in here was an experience. I was pulling into their shop, a bunch of shirtless guys working on bikes all stopped and looked at me. Like one of the scenes from an old Western film when the stranger walks into the saloon.

The owner, Mr.Trung, waved, finished a conversation then greeted me, we talked in broken English about the bike. He then went to work with skill and efficiency. You could say he was like a Samurai slicing fruit.

Parts came off the bike; parts went on to the bike. He stood up at times and yelled things to the other mechanics, who nodded and drove off for parts. He took off several times on a scooter and came back with parts.

While waiting, I meet another expat, Arnold. Arnold is a 65-year young man covered in tattoos that left a job working state said heling kids with substance abuse. He just got back from Northern Vietnam, where he picked up a MONSTER of an old bike. A bike that Mr.Trung was helping him fix-up.

It looked like it was going to take more than a few moments, so I helped to clean up the shop, and took some photos of the space. I also returned a second time to get some new things fixed, and at the time of writing this, I will be returning for the third time (A new noise developed in my bike).

I also offered to help Mr.Trung get his shop online as he wants to "Awake" The shop again. So I may be back a few more times.

Here are some photos from the shop

Wicked vintage bikes just waiting for the right person to come and fix em up.

The starter of my bike all exposed. This was a Major Pain the ass.

Mr.Trung taking a break to "pose" for a photo!

Thanks for reading and I hope you enjoyed this post. :D

Thanks for reading my post, you inspire me to keep posting!
If you enjoyed this post, please consider leaving an Upvote, or a crypto Tip in support:

Or if you want to see other things I do, you can...

Thank you for your support!

Excellent post @jacuzzi I love reading about your travels 😊

Thank you jacuzzi! You've just received an upvote of 47% by artturtle!

I love when small shops and businesses are highlighted like this!

Thanks for the love @for91days. You rock!

Hiya, @lizanomadsoul here, just swinging by to let you know that this post made into our Top 3 in Daily Travel Digest #652.