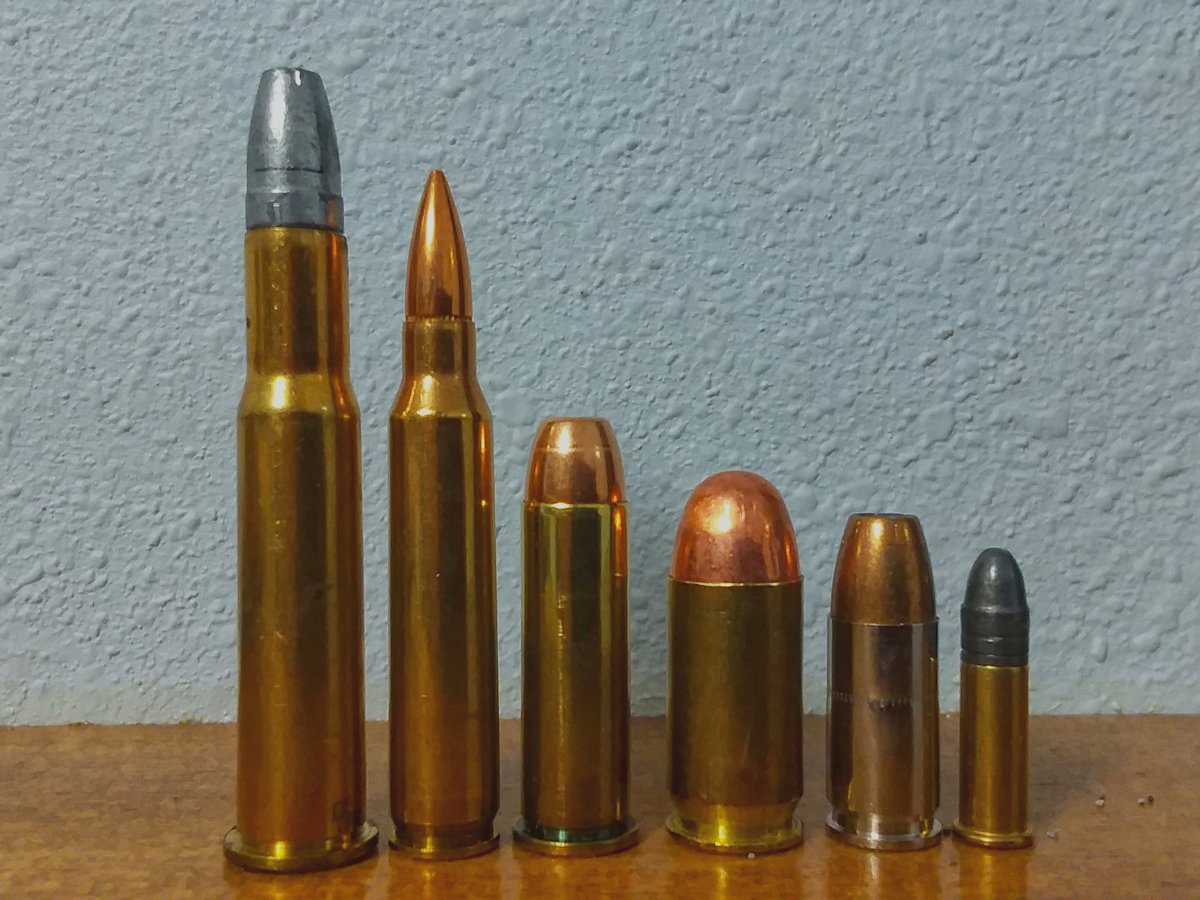 The first self-contained metallic cartridge was Nicholas Flobert's BB cap, consisting of a percussion cap and a small bullet. BB cap stands for Bulleted Breech cap, as far as I can ascertain by my in-depth skimming of Wikipedia.. The CB cap that followed is similarly an abbreviation for Conical Bullet according to the same exhaustive methodology. These cartridges were intended primarily for indoor target shooting due to the low report and low penetration these tiny cartridges produced. It wasn't until the .22 Short and the first Smith & Wesson revolver in 1857 that this was developed into a proper cartridge with both a priming compound and a powder charge.

While still an anemic round even by the standards of the time, the self-contained cartridge made loading a firearm far easier. Soon, other rimfire cartridges were developed to launch larger projectiles. Most of those inventions are now obsolete, and only of interest to collectors or reenactors today, but the .22 Short and its descendants live on. It was lengthened to produce the .22 Long, and later loaded with a heavier bullet to create the .22 Long Rifle sometime in the mid-1880s. Once smokeless powder was developed, this cartridge was loaded using that powder formula. And that same .22 Long Rifle cartridge is still incredibly popular even today. But why?

In the picture above are several popular cartridges I have been able to gather for this post. From left to right, they are:

The round looks tiny. The bullet diameter is .222 in (5.6 mm), almost the same as the .223 Remington. However, the entire cartridge of the .22 LR is not much longer than the heavier bullet fired by the .223. Note also that the .22 LR bullet is the same diameter as the case.

There are a few anachronistic features retained in this old round. The bullet for the .22 LR is cast with a smaller-diameter heel that inserts into the cartridge, while almost every other round made has a larger diameter case that envelops the bullet, and often a case that flares quickly to a larger diameter to hold even more powder as seen in the .223 and .30-30 above. It is also a rimfire cartridge. What does that mean? 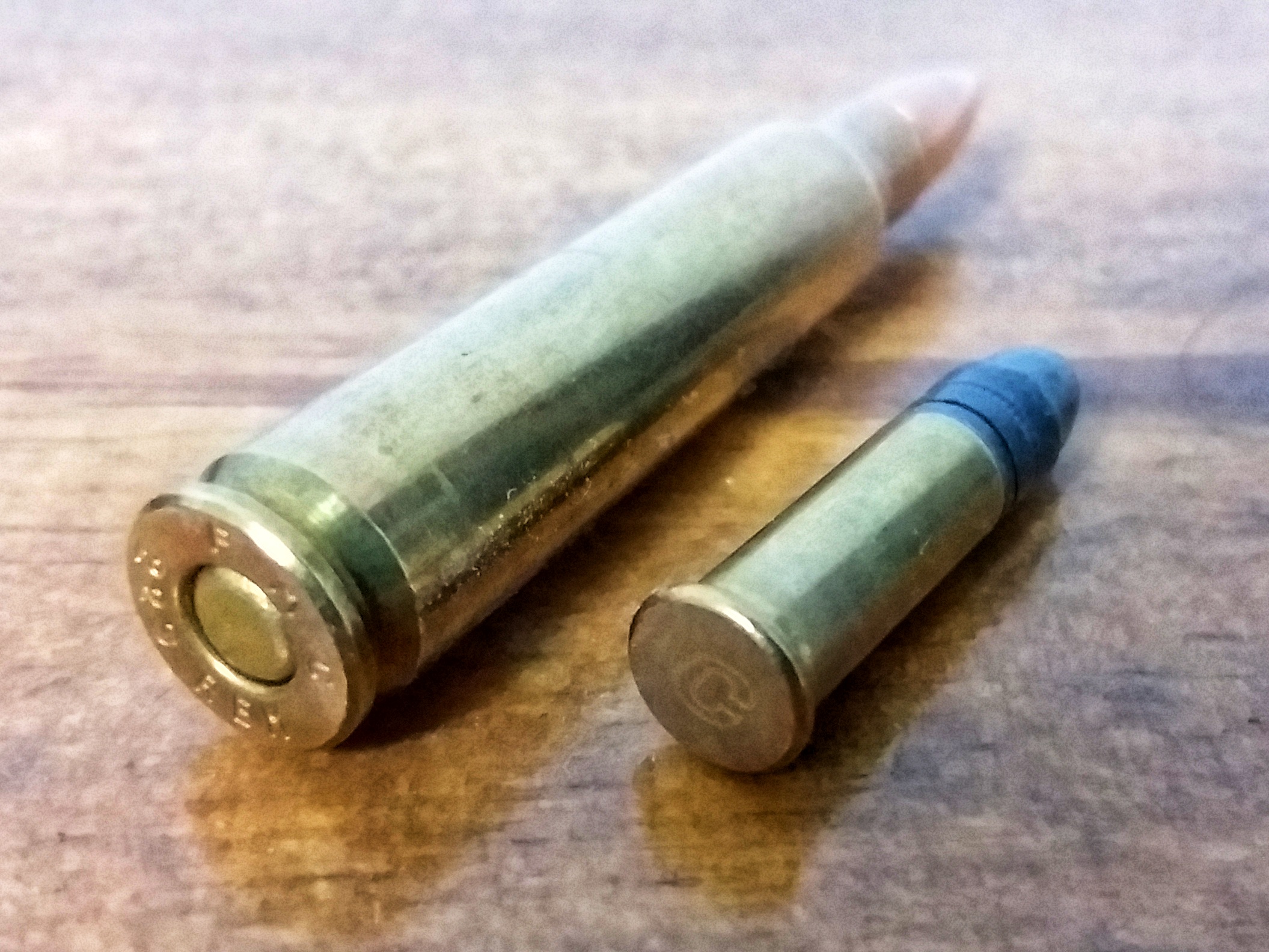 Pictured above on the left is the same .223 Remington cartridge. You can see the modern centerfire primer embedded in the base of the case. The firing pin of the rifle impacts this primer, which reacts by igniting under the sudden pressure. This in turn ignites the powder, which burns very rapidly. The hot gas from the burning powder expands in volume, creating a spike in pressure that shoves the bullet from the mouth of the case and down the barrel of the firearm.
he .22 LR on the right operates similarly, but the priming is very different. Instead of having a separate component, ththe case is first load with a priming comompound paste that fil ththe outside rim before it is load with the main powder charge. The firing pin on a .22 hits s this rim at e base of the case. This starts the same ignition cycle covereded above to fire the round. Thus the term rimfire.

Rimfire rtridges have been largely abandoned in other calibers due to several r reasons, and one of thmost c common issues even day is failure to ignite. If the priming compound isn't spread evenly around the cartridge base inside the rim, it t won't react when stck by the firining pin.

Another tential complaint is that the fired case is not intended to be reused. Centerfire cartridge cases that can be repeatedly reloaded with new bullets, powder, and primers. While it is theoretically possible to replace the priming compound and load a new powder charge and bullet, the job would be incredibly tedious, and the previous firing pin strike cannot be undone. As such, the .22 case is single-use. But it is very inexpensive to mass-produce, so it remains a budget option.

The strengths of the cartridge start with the price and availability. Other than the peculiar drought during the Obama administration, this round has generally been widely available and very inexpensive. Here in the western US, even drug stores and grocers often carry .22 LR, 9x19mm, .45 ACP, .38 Special, and a selection of hunting rifle cartridges.

The low price, small size, and anemic power of the round become advantages for anyone learning to shoot. The lack of significant recoil and report make it easier to learn proper marksmanship. A lot of rounds fill a very small volume of space, so it is easier to pack a day's worth of practice ammo. As an added bonus, the older CB/BB caps, .22 Short, & .22 Long can usually be fired from a .22 LR, although they may be difficult to load and may not cycle properly in a semi-automatic platform.

Rifles and handguns for this round are usually inexpensive, too, although both ammunition and firearms can become surprisingly expensive when optimized for precision target shooting. For experienced shooters who wish to practice their marksmanship at a lower price, the .22 is still a good choice. Not only are there many good target rifles and pistols available, but standalone firearms or adaptor kits exist so shooters can practice using a rifle or sidearm that uses the same controls as their primary weapon, or even using the actual weapon with a barrel and magazine swap. There are rifles and handguns of every design for the venerable .22 LR cartridge, including semi-autos, revolvers, lever actions, bolt actions, pump actions (technically slide actions, but no one actually says that), and probably even break-actions, although I can't think of any examples of the last one off the top of my head. Whatever you're comfortable using, you can find in this caliber.

And what can you do with a .22 of any flavor? Target shooting is by far the most popular use, but these are also suitable for small game hunting and pest control. Coyotes, prairie dogs, squirrels, rabbits/hares, and other game or varmints can be humanely killed, and pelts or meat are not excessively damaged. While it wouldn't be my first choice for self-defense, the .22 LR should not be underestimated, either. I certainly don't want to be hit by one. It is still definitely a potentially lethal firearm. I hear rumor that it is popular for poaching deer with careful shot placement, and a world record grizzly bear was once killed with a .22 Long!

A .22 LR rifle can be a good choice as a camping rifle or survival firearm. The AR-7 takedown rifle was issued by the US and Israeli Air Forces. Some double-barrel survival rifles combine a .22 LR barrel and a small gauge shotgun barrel for more versatility. The popular Ruger 10/22, Marlin Model 60, or Remington Nylon 66 are ideal for foraging. For more information on these, I defer to Paul Harrell on Youtube.

I would advise anyone interested in firearms to buy a .22. The low recoil, relatively quiet report (at least from longer barrels), low cost, variety of model options, and versatility make an example of one kind or another almost indispensable in any personal armory. If you are new to guns, it's a great way to start without breaking the budget, and you will never outgrow it. Besides, it's simply fun to shoot!

Most of those inventions are now obsolete, and only of interest to collectors or reenactors today, but the .22 Short and its descendants live on.

When I was 8, my dad gave me an old .22 rifle from the 1800's that was a single shot and only used the short. My grandpa said it was similar to the one he had to use for hunting back in the thirties. Don't remember offhand the manufacturer. I eventually moved on to a long, and shotguns as I got older. While I wouldn't recommend the .22 as a first choice survival firearm, it does beat throwing rocks. And it is good for small game.

Thus the "can be" qualifier. A modern pistol-caliber carbine and sidearm with a common magazine would be better in all respects but ammo bulk. An AR- or AK-type rifle would be better for hunting larger game or self-defense against predators with two or four legs. A .357 revolver could be a better overall balance while remaining easier to carry and offering the option of reloading cartridges should supplies be available. But I think there is still a niche the .22 could fill.

I figured when you mentioned break action that they must make a Handi-Rifle chambered in .22LR. This article claims they did at some point https://www.guns.com/news/review/bargain-hunting-nef-hr-handi-rifle-review. I can't find one on H&R's website though, so maybe not currently.

My sister-in-law recently gave me her dad's old Marlin 99 M1. I had to replace a couple of screws and haven't had a chance to test it out or anything yet. Still, it was a nice score. From a marginally anti-gun liberal to someone who'd appreciate it.

If it has the shorter mag tube, that largely mitigates the problem of placing one's hand ahead of the muzzle as mentioned in Paul's video. I would say the lesser capacity in a plinking/varmint rifle isn't a major drawback, either. Should be fun! Maybe a review is in order after some range time.

The barrel is 6.5" longer than the magazine tube, so it shouldn't be an issue.

My issue around here is trying to find a good place to shoot. I refuse to use the police range, so it comes down to getting ahold of a relative with a farm who doesn't mind me shooting-- and my go-to guy has moved.