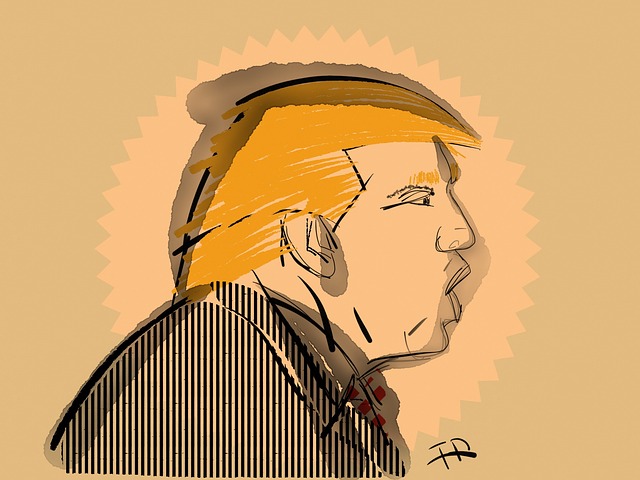 Apparently there are concerns that Trump may refuse to step down or quietly concede should he be impeached or voted from office in 2020. While his ego and ignorance make his actions hard to predict, I can state with fair confidence that this particular scenario of martial law and an orange President-For-Life is not at all probable. Why?

This is just the same song, different verse, a little bit louder, a little bit worse. The flaw isn't that these presidents aren't evil, greedy, egotistical, sociopathic, power-hungry megalomaniacs. They are. But the occupant of the office really doesn't matter nearly as much as people think it does. The system, whether you call it the "deep state," some sort of Illuminati shadow government, or just bureaucratic inertia and the consequences of public choice economics, doesn't care who is in office, and there is no incentive for the system to indulge the figureheads.

New elections keep the populace pacified into believing there is somehow representation and order. It lets people shift blame to partisan disputes every few years instead of challenging the status quo where it really matters. They submit to taxes because "We're only paying ourselves." They consent to wars because they see it as self-defense, and "the government is us." They cling ever more tightly to their flags and anthems because they are emotionally invested in maintaining their oppressors. The Stockholm syndrome of politics must always be maintained.

Therefore, no President will succumb to the temptation of self-aggrandizement in this one specific instance. The Constitution will be trampled without a second thought when our liberty interferes with their machinations, but it will be rigidly upheld whenever it is necessary to reinforce the illusion of legitimacy with great political pageantry. Trump will either be re-elected in 2020, or he will not. It is irrelevant when he is voted out or if he is impeached, because he will be replaced with a new face who will continue to wage wars, enforce laws that violate your rights, and proclaim that they do so to serve you. And you'll probably swallow it hook, line, and sinker, along party lines again, looking like just as much of a damned fool as the Trump chumps today.

Stop idolizing and fetishizing these mere mortals whose only goal is power over you. They don't represent, protect, or serve you in any way. Changing the party or even just the name of the President doesn't matter one whit. Spend your energy somewhere that matters, instead. We have finite time on this earth, and finite resources at our disposal. Use them to build something worthwhile, and don't waste them playing a rigged game.

It's true, they are all the same time after time, they over spend, wage wars and do very little to help the people.

it makes me sad to see people fight with friends and family over a group of people who literally do not know you exist.

It's like a very ugly version of sports fandom coupled with accusations of hate.

hello, consider using the Point tag when posting about politics. Not sure if it will work if you edit it.

Tags after the first can be edited. I can add it in.

EDIT: How does that look now?

The system, whether you call it the "deep state," some sort of Illuminati shadow government, or just bureaucratic inertia

Why not all three? I feel that you have named the three actual branches of govern-cement.

If voting did anything, it would not be allowed.

And i feel the left really screwed up pushing this impeachment so hard/far.
Now we are going to have two sides that if they lose are going to start talking about separation.

Democrat and Republican. Two cheeks of the same ass as they say.

And they reauthorized the PATRIOT Act, too. What a bunch of hypocritical lying, thieving bastards. AOC is wrong, but I give her credit for speaking out against this farce at least.

I don't know why you refuse to accept Trump is a dangerous person, it's not like saying that automatically makes you incapable of talking about other things.

Did Clinton, Bush, or Obama say that the constitution lets them do "whatever they want"? Did they post that they wanted a 3rd term constantly on social media?

This whole grift that you do is bizarre to me. you hate electoral politics yet talk about it all the time, at the expense of other things, while saying that's what other people do.

Politicians are typically bad. Let's get them out of office. It worked before, it will work again. Be logical.

Trump is a dangerous person. What part of my post implied he isn't? But he has also always been a clownish blowhard buffoon spouting nonsense with an intent to get a reaction. The system itself is far more dangerous than he is. The system gave him the nuclear football and the power to impose his opinions on others at gunpoint. That is the real problem, and it will be the real problem with his successor when he is replaced, too.

Clinton, Bush, and Obama all decided the Constitution wouldn't impede their schemes when strict construction got in the way. That tradition goes all the way back to Washington. They were just able to couch it in better doublespeak. As for social media, Obama was the first POTUS to significantly use it at all, so it's not like there's a lot of precedent. And we all know that Trump has no filter between his brain farts and his pie hole (or his twitter fingers).

I hate electoral politics, and I talk about it frequently because people think it justifies authoritarianism, war, prohibitions, police state abuse, etc. It's a source of perceived legitimacy for systemic injustice. That's worth writing about, don't you think?

Politicians can't help but be bad. Representation is a myth. Public choice theory, moral hazard, the economic calculation problem, etc. prevent them from making wise decisions. Voting the bums out always means just voting new bums in. We need to attack the perception of legitimacy if we want to strive toward real change. Be logical.

Glad we're on the same page about T-Rump

That's worth writing about, don't you think?

Yes, but write more about protesting and unions!

I heard a Rumor, that Trump may be able to Run, Two More Times...

They're saying that Congress my Rule his Current Term, "Invalid"...

I don't see how that is possible in any way whatsoever unless the 22nd amendment is repealed. What legislative process could invalidate the last several years altogether, anyway? They still happened.

I've seen people seriously say such things. The internet is full of misinformation, after all. And I have no idea how seriously to take someone who includes Hollywood time on all their comments.

Good morning! Hollywood tines works fine with understanding; also the digital clock!
How are you? My ICU is quiet right now - I shouldn't say that to the end of the shift.

It is rare I'm sure. I had never heard of it except for your postings.

It's a joke my friend

I re-told this joke to my family at x-ma's: it was a hit!

yeah, fucking clear he will have to be executed, plain sight, 4k (8k hd 3d), there is no other way with those things...

since they believe they rape children, they will fuck us too, they fucking dream.

Killing him solves nothing. As I said above, changing the party or even just the name of the President doesn't matter one whit. If you really want to be sadistic, drop him back into the real economy and watch him flounder into bankruptcy again.