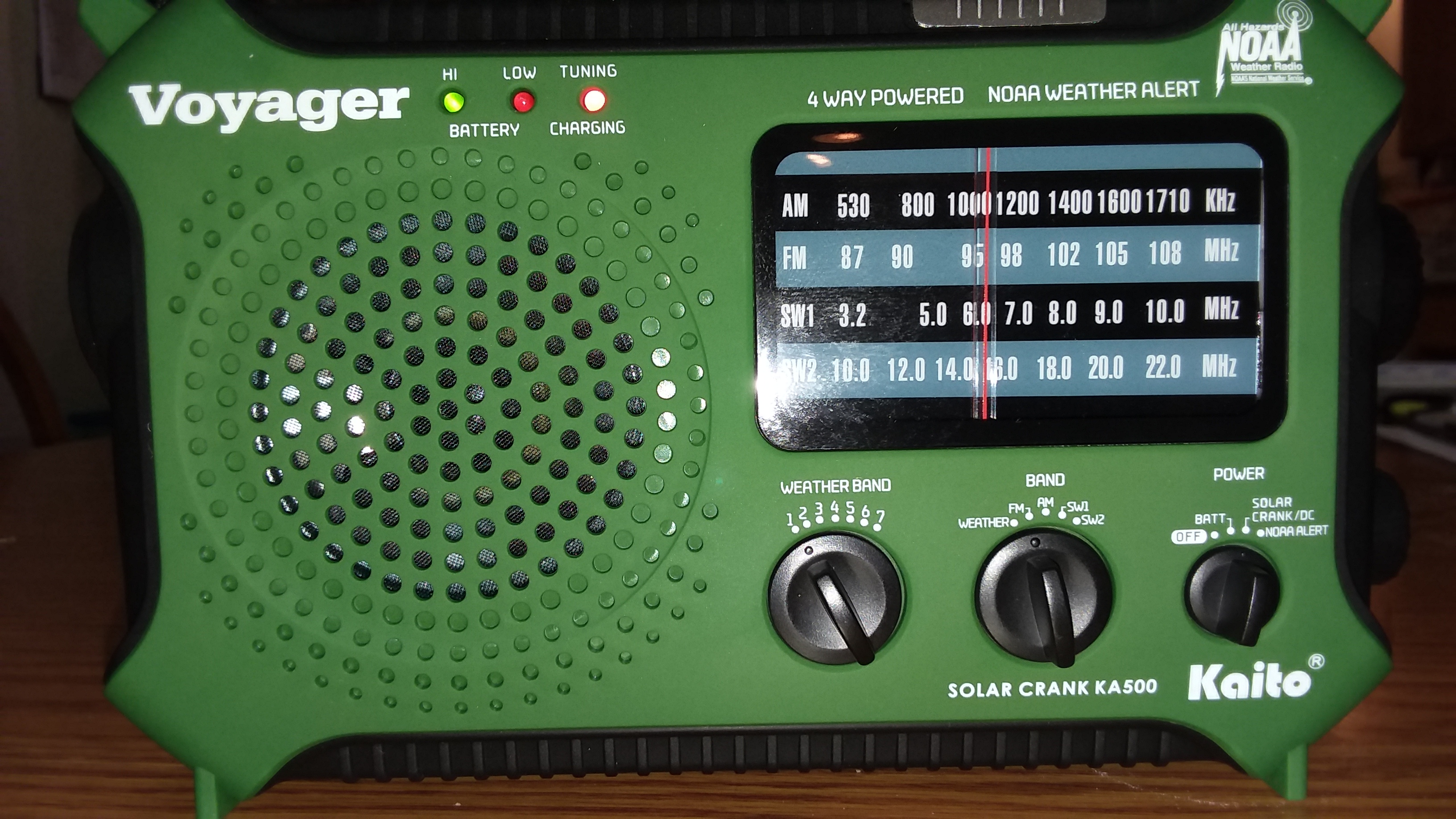 This isn't so much a review as a first impressions opinion piece. I need radio for winter weather information. In years past, we have had power outages and internet failures, so radios with batteries are still very much a useful tool. Cell service is spotty, and tends to get overloaded when everyone wants their news and entertainment that way. Last time the power went down, I only had my battery-hungry 2003-vintage piece of junk boom box. It pulled in an AM signal, so it was still better than nothing. Next time, I hope to be better prepared.

This unit not only uses a mere three AA batteries; but it also has a Ni-Cad battery that can be charged via USB, a standard outlet, a hand crank, or a solar panel. The manual does warn that the solar panel will take days to charge the battery, but it remains an option. The USB port can be used to charge other devices, which could be handy. So this is not likely to be dead when needed, and it doesn't eat D-cells by the dozen. Win!

The radio receives seven frequencies from the NOAA National Weather Service. Two broadcast over my area. It also has AM/FM and shortwave. I am sitting in the house with lots of electrical noise, but AM and shortwave channels are still coming through somewhat. If I move my phone close to the radio, the hiss of static increases. FM works quite well. All told, it should work fine in a power outage or away from home.

Build quality is hard to determine after so little time. The hand crank doesn't feel flimsy, and stows away nicely. The tuning and volume knobs are OK. I am not sure I like the three knobs on the front. The weather band, frequency selection, and power source knobs feel a bit flimsy; and they stick out from the case in a way that may get them snagged and broken if carried in a backpack or knocking around in a boat or truck. I could be wrong though. The FM antenna is a simple telescoping design that just pulls straight up. It does not swivel. It works well, though. Even in its stowed position, it pulls in local FM and NOAA signals pretty well. Extending the antenna definitely improves reception considerably.

This radio has a few other tricks up its sleeves. There is an LED reading light, a red flashing beacon, and a white LED flashlight. The weather radio can also be set to receive emergency alerts while otherwise powered down, which could be essential for campers. It also comes in colors other than green.

I paid about $50 for this radio, and I think it will serve well enough. While I have some reservations about design and build quality, nothing makes me cringe. It isn't waterproofed, but there are rubber flaps to cover the ports, so it's not likely to die from a bit of dampness, either. There are smaller radios, and doubtless better radios, but I suspect this is a good option in its price range. I like the numerous ways to charge it even without access to mains power or batteries.

What are your favorite portable radios of today? What features do you look for in a weather radio, and what tales can you tell of emergency alerts saving your bacon? Comment below!

You are perfectly timing this purchase with the inbound dump tomorrow. It looks like a solid little unit and good for travel. I have had a couple world band radios over the years, (80s/90s) and they worked amazingly well even back then. We have solar and a generator that runs off natural gas so I am able to get power pretty much anytime at home. I do have a bunch of Motorola 2 way radios that have the weather service channels and I pop that on occasionally when we have inclement weather.

I have a C.Crane Solar Observer radio that I was given for my birthday a couple years ago. I like it.

I have my doubts that the solar panel does much. And the crank doesn't seem to keep the battery charged for storage. It also uses 3 AA batteries, and I usually use cheap Chinese rechargeables in it-- which I can recharge with one of my solar panel USB chargers. I keep some good non-rechargeable lithium batteries close in case of emergency-- but in that case the crank would power it enough to get by.

Nothing really happens around here so I've never been saved by an emergency radio. In fact, that's true everywhere I've lived my whole life. Hmmm.