THE MOTHER OF HAROLETS AND ABOMINATIONS OF THE EARTH 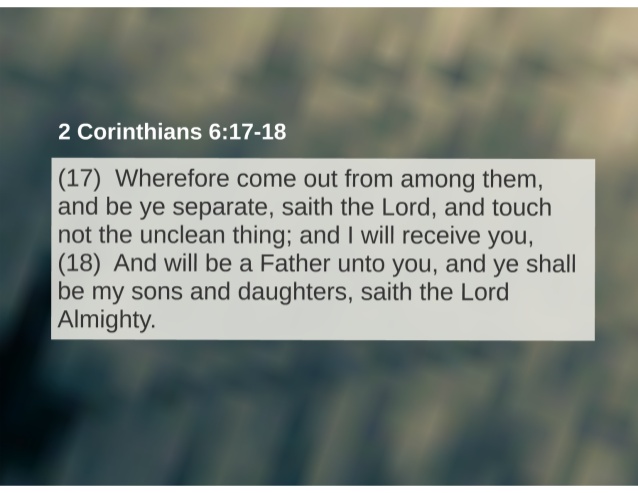 God's description of the wicked church of the end times makes her sound like a drunken whore that claims she "is all." Whoredom, fornication, adultery: these are all denounced continuously throughout the Bible. So is blasphemy. Christ tells an adulterous woman to "go and sin no more," after he keeps her from being stoned to death by a group of accusing religious leaders, meaning what she was accused of WAS sin, but he forgives her in repentance and ceasing of it.

Paul denounces drunkenness and all manner of sex outside of the intention of God for marriage between a man and his wife, or a woman and her husband. The false church twists this easy to understand teaching in favor of making the sin of fornication and adultery look wholesome and acceptable within the church as though it were a small ordeal. Fornication is the one sin that is against your own flesh, and your body will always wear the mark of it no matter what those around you have coaxed you to believe. It is you alone that will pay the price. It is you alone that can consent or refuse.

The false church gets drunk on the blood of saints and drinks it like wine as she lies to the whole earth, claiming to be God and the voice of God on earth as she denounces the saints, calling them blasphemous and wicked. She uses fornication and seduction as a tool to manipulate and control in her congregation. She sells her women for profit to pornography and to entice wealthy men into the pulpits for their tithes. On the surface she appears so innocent and wholesome, she is so seemingly kind and speaks with flattering words as smooth as oil. Fornication isn't sinful sex to her, it's "just a little lovin'." Her lies that destroy lives, bankrupt life savings, and breakup families aren't a big deal, they're just "your misunderstandings" or "little fibs." (Oops!) She downplays the great evils performed by her own hand and even claims her victims forced her hands to do such wickedness. She claims to be Christ's mother (though she denies Christ ever walked in the flesh) and even goes as far as to claim that persecution of prophets is her "punishing Judas for selling out 'her son.'" It's laughably weak justification, a total twisting of scripture, and obviously wrong to anyone willing to seek truth for themselves and read the Bible as God has called us all to do.

She claims that living as Christ said you must, moving frequently and being persecuted, ("... when they persecute you in this city, flee ye into another: for verily I say unto you, Ye shall not have gone over the cities of Israel, till the Son of man be come,") is somehow "shifting sand," and proof that you're wrong in life and evil as "you're getting back what you've sown. " But it is her doctrine that is shifting sand, and she will reap as she has sown when she is cast into hell for eternity.
One day she's pro-gay because gay people are listening, then she's for chemical castration of gay people when they're absent, then she's against that when they return and she "never said that." Then she's for murder, and then it's "an execution" just like she had done to John the Baptist and Jesus, then it's "not important what it's called" because it's "to protect" her false church from "blasphemy" and she's "doing God a favor."
Whoring is bad. Fornication is bad. Adultery is bad. Thieving is bad. Murder is bad. Sin is sin. The wages of sin: death.
God doesn't call any of you average citizens to execute people, those of you who have a leader over you calling you to do that should throw down your leader. The wicked kill for their convictions while the righteous die for theirs. Christ was and is a Peaceful master and a good shepherd. He told you not to judge or take revenge. Judging will have you judged. Punishing will lead to God punishing you. Refusal to forgive others will lead to God dismissing you without forgiveness.

If you're not a judge lawfully calling down a death sentence (as is lawful and right by the system of the country in which you live) upon a murderer that's been properly tried before a court and a jury of peers, as is the requirement for a death sentence- you should not even begin to believe killing someone as "punishment" is your calling. And if you have done all of this purposely and the person is actually innocent, as was the case with Jesus our Lord, then no matter what the appearance of it is outwardly, and no matter how hard you imagine otherwise and make-believe, you're just committing the act that you claim to punish for and have become fit to be punished for it.

Any spirit that denies that Christ came walking in the flesh is not of Christ. It is idolatry to serve or pray to any "deity" or "god" other than the God of Abraham, Isaac, and Jacob and His Messiah, the Christ. This is not difficult to understand, it is just difficult for some idolaters to swallow. But It is better to offend someone by telling them the truth of the gospel than it is to let them perish in misunderstandings that lead to eternal punishment and separation from God.

No matter how many people tell you you'll "be fine," or that sin is acceptable, you should know better and you will face a day of judgment for all that you do in your life. On that day, you will stand alone before God. On that day, all of your sins will be known and spread before you; as you stand before the host of heaven, you will have no excuses and nowhere to hide from your lifetime of deeds or intentions. On that day, the guile of the serpent's words will not cover your sin. On that day, the word of Christ will be your freedom or it will be your sentence. No matter the age of the world, your life is short. The day of God and His judgment is soon. Take heed lest you perish into eternal damnation, and wailing, and everlasting torment. "Touch not the unclean thing," God has said!