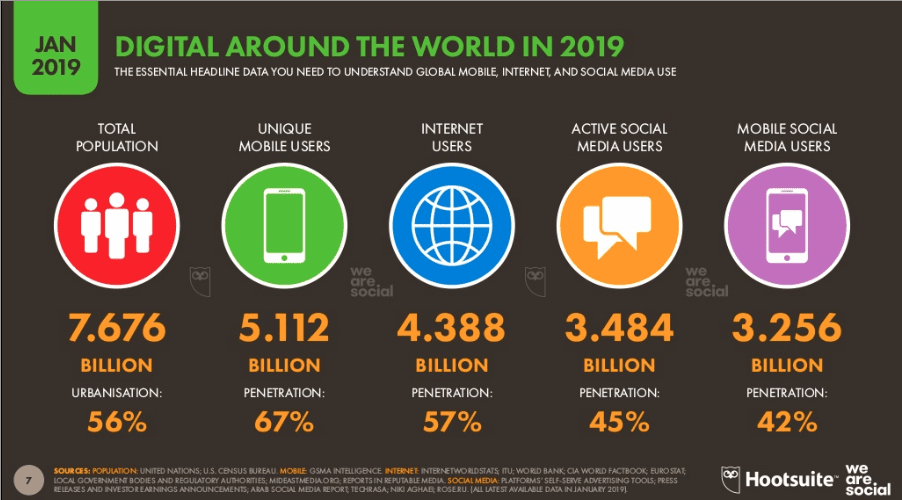 It seems that many of us can't fathom what all an entire economy or "ecosystem" has to offer.

Especially one that encompasses "social networking".

Just a few figures to entice your thinking caps:

In 2015, the International Telecommunication Union estimated about 3.2 billion people, or almost half of the world's population, would be online by the end of the year.

Which is approximately 59% of the worlds population.

That equals approximately a 41% increase in individuals using the internet from the figures in 2015.
(or should I say, "individuals with access to the internet", that may be a better way of putting it, idk)

The e-commerce industry will be responsible for about $3.45 trillion in sales in 2019.

Won't say any more on that, this figure is enough for the point I wish to make in this post.

How many people are on social media?

As of June 2017, the world’s population stands at 7.5 billion with 3.8 billion people using the internet. Active social media users account for 2.89 billion people

Here is a pretty picture to describe this in 2019:

SO ABOUT 80% OF PEOPLE WITH INTERNET ARE ON SOCIAL MEDIA!

So let me make a point here about Steem, the vision of the potential future of Steem and anything that affects any part of any market within the wide variety of peoples on social media:

That isn't you or me as individuals.

Now, I understand that we as human beings often tend to confine ourselves to that which surrounds us.

We too often get put into a situation where we cant see past the present, even though we are convinced that we are thinking long term and that we see the broader picture.

After all, we are only human.

But come on, look at the figures, add to that all the economics and trading of crypto, stocks etc etc etc and then we get into the above figures to the power of "X" in the potential that Steem has.

Instead of constantly moving around the same old topics, can we start thinking globally, when we consider any course of action that shall affect the future of Steem.

Exclusivity may seem great to some, but an all out open nature in business seems to work better. Dare I say, the early stages of Facebook somewhat proved that.

For those who think I am picking on them, please take note that I have not named anyone in particular, because our ecosystem is based on voting and we are all responsible as such for everything. None of us can point the finger and claim that it is anyone else that I am talking about.

In fact, here I am talking about my visions and my responsibilities as a Steemian, without pointing a finger at anyone else. This post is a reflection of the thoughts and facts that keep me so enticed with what Steem has to offer the world.

Will leave you there, with this post and these facts/figures.

If you look on any of the sites that pay with crypto for content, you will see the same thing... mostly articles about crypto. Most crypto enthusiasts are looking to make money, so anything that relates to crypto will be of interest because they want to have as much information as possible to know when and what to trade. This is natural. Of course, because that topic is most likely to be read by others, the authors looking to have their content read will be posting about crypto. It is a vicious circle, like a snake feeding on itself.

However, feeding on yourself isn't really a good idea, so come to my blog and take a breather for 5 minutes a day by joining my daily Zombie Adventure games. Relax, have some fun and relieve some of that stress, worrying about your crypto assets. They say that laughter is the best medicine and I do get some good laughs from some of the comments posted by the players. I would love to have you come and join us.

Thanks for the invite, but tbh, I'm not much of a gamer.

But I will check it all out and try to follow what all is going on from time to time. First impression seems like something that can definitely draw some attention from many people.

Thanks for the words of encouragement and support.

But I can guess that because this blockchain technology is so new that many possible uses have not even been thought of yet. I picture it like the early days of Internet: modem access and chat rooms; no need for search engines because there were so few websites, etc. Now all the content is overwhelming and practically everyone is connected in so many ways. The possibility of massive growth is definitely there!

I think maybe my response below to kayceefresh answers this.

I will add, although we may be human and too often lean on that for our shortfalls, we are human and we have the ability to adapt to the changes.
So what may seem to be an "excuse" is also the answer.

I am sooooo looking forward to the day we can break free from this rigged system.

One at a time we will get there the figure just reminded me of the movie in time by Justine Timberlake on how rigged the world system is and the more we can get more people into the blockchain the early we can free alot of people that has been enslaved and subjected to the system, thanks for sharing

As soon as a system makes you "dependent" upon it, you are not INDEPENDENT.

If a system, no matter where it governs, doesn't allow for an individual as such to become independent and to have the capacity to utilize what is out there to fairly and reasonably capitalize ones know how and capital so as to gain independence, then yeah, it is a "rigged system".

So many of us human beings fail to see anything past the treeline.

Unfortunately, the way things are being done is to make it easier to control the mass populations on a global scale. Not prevent it. The short term vision of what a Crypto might be or enable pales with comparison to the long term projections if the correct structure is put in place now.

Crypto will not set you free with tight control over it. It becomes nothing more than another form of a controlled monetary system. The Crypto that produces the resources to oppose that effort will lead the way and gain natural growth.